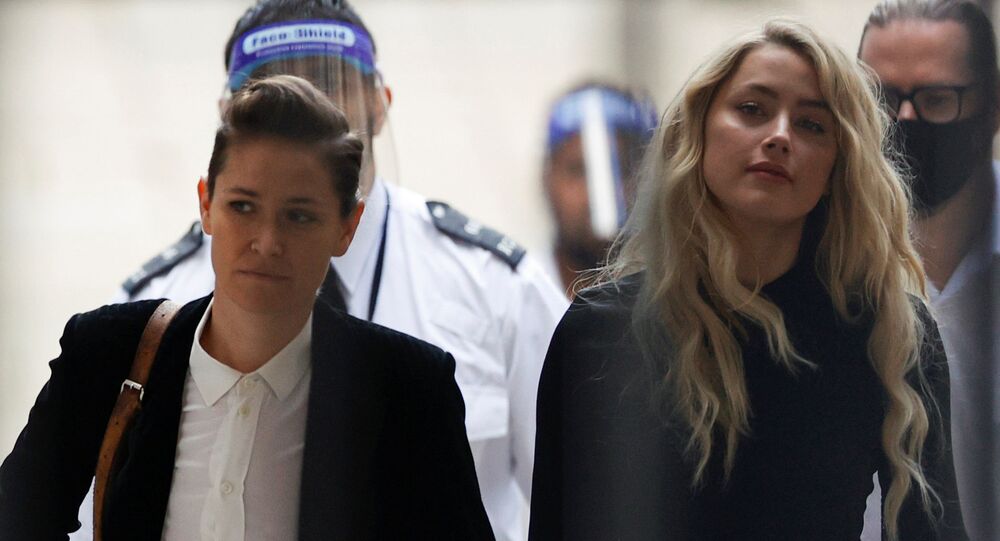 Hollywood star Johnny Depp has always denied he struck his then wife Amber Heard during their relationship. His libel case against The Sun newspaper over an article written by its executive editor Dan Wootton in April 2018 draws to a close this week.

Johnny Depp’s lawyer has told the High Court in London that The Sun newspaper had failed to prove the American actor beat Amber Heard despite calling her as their star witness.

Depp’s counsel, David Sherborne QC, said: “By this libel action, Mr Depp seeks vindication of his reputation in respect of articles published in The Sun. The Court has heard three weeks of evidence, and despite a wholesale attack on many aspects of Mr Depp’s lifestyle, the defendants have not come close to proving the substantial truth of their serious allegation.”

The Depp Heads have "invaded" the central hall of the Royal Courts of Jutsice for the final day of #JohnnyDepp libel trial. One dressed as Captain Jack Sparrow. David Sherborne, Depp' barrister, applauded.

​He said Ms Heard’s evidence on obtaining a Temporary Restraining Order was “not credible.”

He said that when she was shown her own medical notes Ms Heard refused to accept what the documents said and sought to blame her nurse, Erin Boerum, and Dr (David) Kipper for allegedly writing up notes incorrectly.

.@SkyNews your reporter who is just sitting in high court and covering Johnny Depp's trial intentionally excludes important parts of David Sherborne's speech. It's not fair comparing to how you did that yesterday when the sun were presenting their arguments. pic.twitter.com/t3oJjIPamC

​"It was was notable that when challenged with evidence, Ms Heard introduced wholly new allegations," said Mr Sherborne, who added: "Ms Heard’s tendency to blame others for anything which she did not want to accept was correct, or which put her in a bad light was notable feature of evidence."

Depp’s lawyer, in his closing arguments before the court, claimed the April 2018 article by Mr Wootton was defamatory because it asserted that Ms Heard had given “a detailed history of domestic abuse incidents” and claimed some of them led to her “fearing for her life”.

He said the article claimed the “evidence was overwhelming” that Depp “engaged in domestic violence against his wife Amber Heard”.

​But Mr Sherborne said: “Mr Depp, as he made abundantly clear throughout his four days in the witness box, denies all allegations that he was violent to Ms Heard, and the evidence adduced at trial means that the court cannot be satisfied that any pleaded incident has been  proved.”

Mr Sherborne said the accusations against Depp were “embedded in a context that lays damnation upon damnation”.

He said: “The ‘hook’ for the articles was a decision by JK Rowling to stand by her decision to cast the claimant in a forthcoming film of one of her popular books…The outrage professed by Mr Wootton at the decision to give the claimant a leading role in this major film is an essential and damning element of the meaning which the articles convey. Mr Depp is portrayed as completely unsuitable to work in the film industry.”

LIVE FOOTAGE of David sherborne giving his closing statements on the final day of Johnny depps lawsuit against The Sun pic.twitter.com/QvXhjjez8c

​In the article Mr Wootton went on to ask “five questions which Rowling MUST answer” included “Why did Depp agree to pay £5 million as a settlement, including a confidentiality

agreement, if there was no truth in the allegations?”

"Amber was insulting him, calling him names, and in the middle of this onslaught I heard her say specifically 'your career is over', 'no one is going to hire you', 'you’re washed up', 'fat', 'you will die a lonely man'." - Tara Roberts

​Mr Sherborne said Mr Wootton compounded the damage done by the article by putting Depp “into the same category of Harvey Weinstein” and said this was intended for him to be condemned by society.

On Monday, 27 July, the barrister representing The Sun newspaper, Sasha Wass QC,  had said their defence was simple - they claimed it was “true” that he was a “wife-beater.”

Miss Wass said: “(Our case) is one of truth - namely that Mr Depp did indeed beat his wife.''

I would like to personally thank everyone who showed up to court in support of Johnny Depp these past weeks for many of us who couldn't especially to the angels who gave him bouquets. Ive been following this case since day 1 and the amount of support Depp has received is great! pic.twitter.com/09mp71uvg9

​The Sun's defence relies on 14 allegations of violence between 2013 and 2016 made by Heard. These included incidents on his private island in the Bahamas, a rented house in Australia and the couple’s penthouse apartment in Los Angeles.

The judge, Mr Justice Andrew Nicol, is expected to adjourn the case later on Tuesday and deliver a reserved judgement next month.