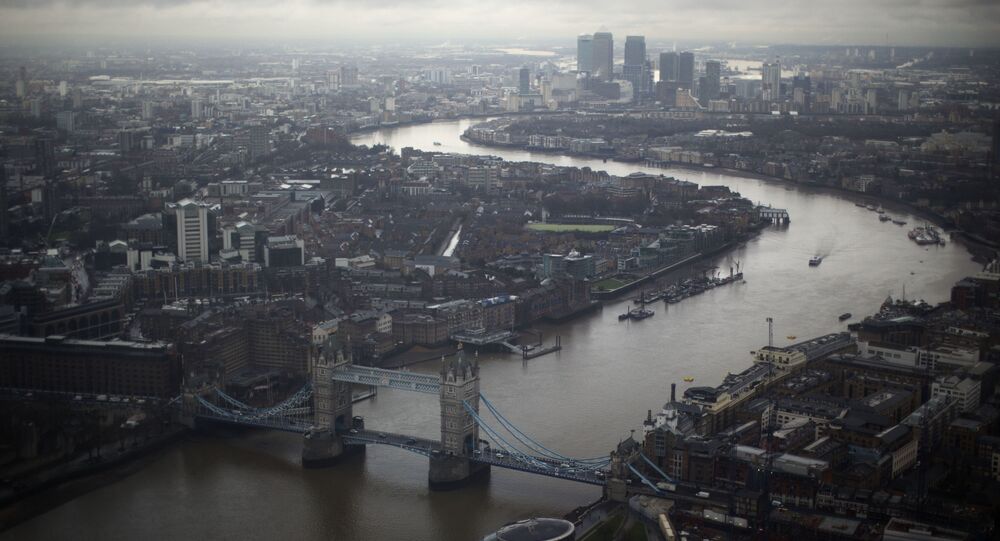 Transport for London has begun the construction of the Silvertown Tunnel in an effort to reduce both congestion and improve air quality in London, which is projected to get worse in the coming years. Environmental activist group Extinction Rebellion claims that building and using roads for heavy transport will worsen pollution in the UK capital.

Three Extinction Rebellion activists have locked themselves to a drilling rig on the Thames at North Greenwich to obstruct the construction of a road tunnel underneath London.

The activists occupied the structure on Saturday morning, which they claim is used to install "seismic monitors" to prepare for the initial drilling of the Silvertown Tunnel next year.

XR activists have boarded a rig which has begun preparatory work for The Silvertown tunnel in the centre of the Thames at North Greenwich. @speakoutwoolwi1 @SilvertownTn @GreenGreenwich @XRLondon @XRebellionUK pic.twitter.com/0GA7nij6s6

​They sent the keys to the locks they chained themselves to the rig with to London Mayor Sadiq Khan, along with a note asking him to come talk to them.

In an attempt to highlight concerns about increased air pollution in the nearby area, the activists used a dinghy to sail to the rig and attached the bike locks to the structure by their necks.

They then unfurled a banner reading: “No toxic tunnel”.

Around 5 minutes after they boarded, Metropolitan police officers arrived.

“Police were called shortly before 5am on Saturday 25 July to reports that three protesters had gained access to a ‘rig’ on the River Thames in Greenwich. Officers, including the Marine Policing Unit, remain in attendance", a Met spokesperson said.

A spokesman for Extinction Rebellion said that they were "proud" of the activists "standing up for the respiratory health of local residents and the wellbeing of future generations".

“The man with the power to stop this is Sadiq Khan. He has refused to listen to any of our legal means of appeal. The keys to the locks around the necks of our activists have been delivered to City Hall this morning with a note asking Sadiq to come and talk to us", the activist said.

3 rebels are locked on the ridge and the only key was delivered to @MayorofLondon pic.twitter.com/7EEc9LYCDv

​The group said that the tunnel could turn into a highway for high-polluting lorries and large transport while not easing congestion locally as smaller vehicles will continue to use the same roads.

“The air [here] is already toxically polluted and people are dying as a result”, the group said.

Sadiq Khan has said that the project will “effectively eliminate congestion” by reducing traffic as well as improving air quality. Noise and air quality monitoring are also included in the pledges, along with a new river wall to improve flood protection.

Activists claim that the construction of the tunnel itself, predicted to be ready by 2025, will lead to increased CO2 emissions.

Transport for London (TfL) is understood to be going ahead with the construction, following a delay due to a legal challenge launched by the losing bidder for the contract.