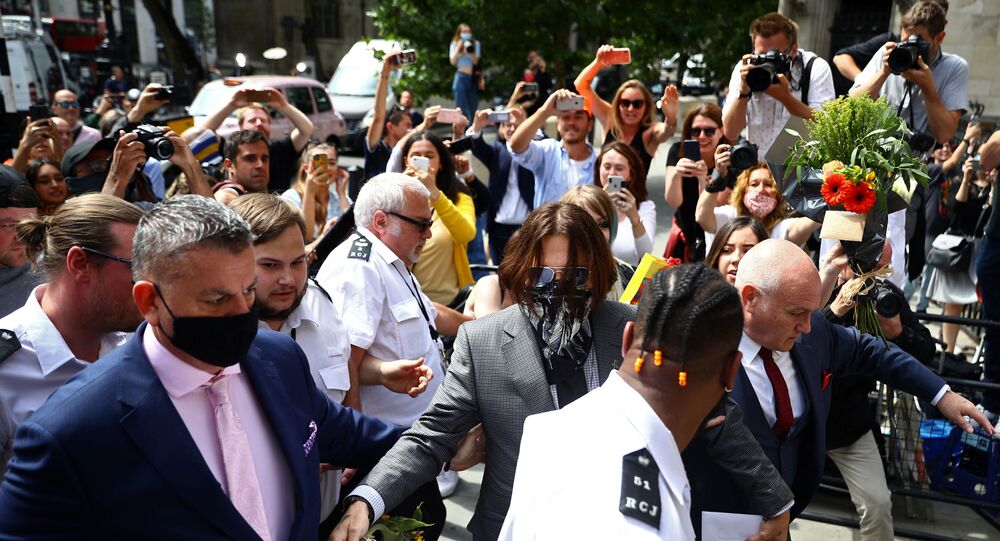 Taking Sides: Which Celebrities are Backing Amber Heard and Who is on Team Depp?

In April 2018 The Sun newspaper wrote an article claiming US film star Johnny Depp had beaten his actress wife Amber Heard. Depp has always denied he was guilty of domestic violence and the libel trial at the High Court in London is drawing to an end.

Depp, 57, has always denied committing any violence towards his second wife, Amber Heard, 34, and is suing over a 2018 article which labelled him a "wife beater" and questioned his casting in the "Fantastic Beasts and Where To Find Them" franchise.

​The libel trial at the High Court in London has heard evidence involving a number of celebrities, although none of them have testified in person. So who is taking whose side?

Johnny Depp’s supporters included his former partners Winona Ryder and Vanessa Paradis, both of whom had been prepared to give evidence in court but were told at the last minute it was not necessary as The Sun was not suggesting he had been violent to anyone but Heard.

Ryder, a Hollywood actress who Depp dated between 1989 and 1993, gave a witness statement in which she said: "I understand that it is very important that I speak from my own experience, as I obviously was not there during his marriage to Amber, but, from my experience, which was so wildly different, I was absolutely shocked, confused and upset when I heard the accusations against him.”

She said: "The idea that he is an incredibly violent person is the farthest thing from the Johnny I knew and loved. I cannot wrap my head around these accusations."

Ryder, 48, added: "I truly and honestly only know him as a really good man - an incredibly loving, extremely caring guy who was so very protective of me and the people that he loves, and I felt so very, very safe with him."

Paradis, who was in a relationship with Depp between 1998 and 2012, said: “I have known Johnny for more than 25 years and we raised our two children together. Through all these years I’ve known Johnny to be a kind, attentive, generous and non-violent person and father.”

The French singer and model, 47, said she was aware of the allegations Heard had made but insisted: "This is nothing like the true Johnny I have known and from my personal experience of many years I can say he was never violent or abusive to me."

The court also heard evidence about text messages between Depp and his close friend Paul Bettany, a British actor who has starred in Avengers: Infinity War and Captain America: Civil War.

​Depp and Bettany appeared together in three films - The Tourist, Mortdecai and Transcendence - and the High Court heard they shared a similar dark sense of humour.

At one point The Sun’s barrister, Sasha Wass QC, read out a text message exchange between Depp and Bettany  in which they joked about burning Heard “because she was a witch”.

In one message Bettany wrote: "I’m not sure we should burn Amber. She is delightful company and pleasing on the eye. We could of course do the English course of action and perform a drowning test. Thoughts? You have a swimming pool."

Depp replied: "Let’s drown her before we burn her!!! I will f*** her burnt corpse afterwards to make sure she’s dead."

Heard claimed Depp was violently jealous of both men. She denied having affairs with Musk - who she nicknamed Rocketman - or Franco.

The way the media are blatantly siding with Amber Heard but the public don’t believe her anymore because most people are smart enough to realise all the changing, lies and inconsistencies in her stories proves that Johnny Depp was the victim all along.

​In August 2016 Depp and Heard divorced - and Heard received US$7 million, which she donated to charity - and she began a relationship with Musk, splitting up with him a year later.

They got back together in January 2018 but split up again and Musk then met Canadian singer Grimes, with whom he recently had a child, which they have named X Æ A-12.

Musk, 49, did not give evidence or a witness statement at the libel trial but his name did crop up several times.

The South African-born tycoon has denied he had a relationship with Heard before her divorce from Depp, but the court heard he texted her regularly and promised to provide her with security 24/7.

Depp’s lawyer, Eleanor Laws QC, read out a text from Musk to Heard, which referred to the offer of providing security: “The offer would stand, even if you never wanted to see me again... anyway, sorry for being an idiot. The radio silence hurts a lot. It only matters because I really like you."

In the first week of the trial Depp's lawyer Adam Waldman said: “Last week Elon Musk publicly stated his relationship with Amber Heard did not start until late June 2016. These messages between Miss Heard and Mr Musk profoundly contract Musk’s statement that he ‘wasn’t ever in the vicinity of Amber during their marriage’.”

The SpaceX enterpreneur has also denied being involved in a three-way love triangle with Heard - who is bisexual -and Cara Delevingne.

Amber Heard says she was being "discreet" after being asked whether she was attempting to hide from CCTV in a lift with James Franco.

The actress has denied having affairs during her relationship with Johnny Depp.

​The trial also heard James Franco was seen on CCTV footage arriving at the couple’s Los Angeles apartment while Depp was away.

Franco, 42, also did not give evidence or a witness statement but Heard described the visit on 22 May 2016.

She claimed she had facial injuries after Depp threw a phone at her during a row about faeces found in the marital bed, which Depp claimed she was responsible for.

On Friday, 24 July, Heard’s acting coach Kristy Sexton gave a witness statement in which she said:  “Amber is a very open, passionate, committed and generous person. She works hard and is very committed to her career.”

Amber continues to not take responsibility for her actions. & instead lies in court.

“I had hoped Amber would take accountability for her behavior but she did not.”-Amanda de Cadenet pic.twitter.com/8nEbTSZFeb

​She said she met Depp several times and “noticed him speaking in dismissive terms about her work”.

Ms Sexton said: "I overheard him saying to her a few times words to the effect of ‘if you aren’t going to do something great and huge then I don’t want you doing it’…She told me he was particularly concerned about her taking roles involving sexuality and/or sex scenes."

She added: “By the end of their relationship, she was not working much and she explained to me that she had stopped taking on so much work because it just wasn’t worth the fights.”