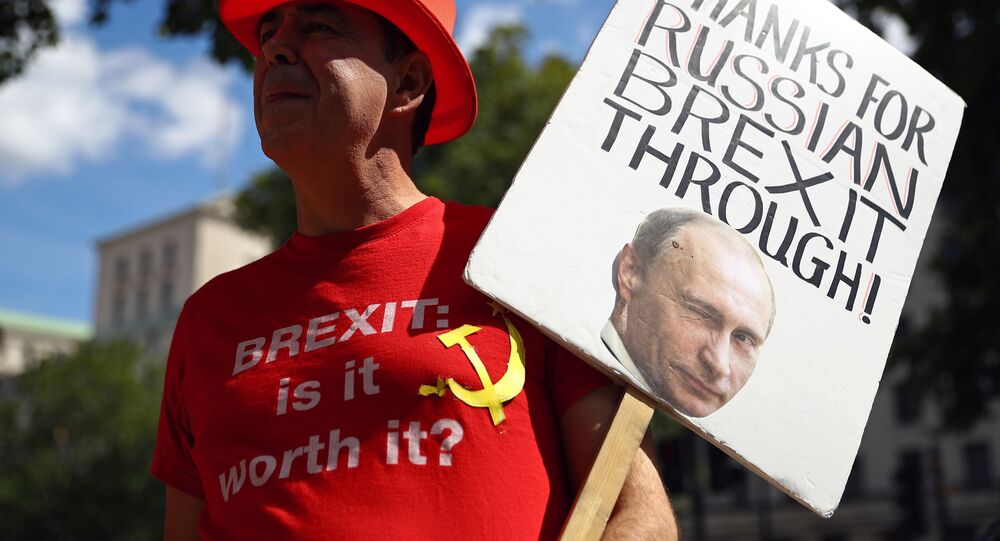 A widely-anticipated report on Russia’s alleged interference in the 2016 Brexit vote was finally published this week, raising even more questions than answers, as usually happens with Russiagate stories. The heavily redacted doc blames Downing Street for turning a blind eye to Russia’s alleged efforts to interfere with the UK's internal politics.

The report by the UK’s Intelligence and Security Committee (ISC) published on 21 July concluded that Downing Street “had not seen or sought evidence of successful interference in UK democratic processes or any activity that has had a material impact on an election, for example influencing results”.

Even so, for the ISC the UK remains “one of Russia’s top western intelligence targets”, with the report blaming British officials for failing to see this.

Although there is no proof of Russia’s alleged interference in the Brexit referendum and “no real in-depth investigation” into alleged election meddling, unlike the infamous Mueller Report, the “Russian blame game” is still going on among UK politicians and the media, says Earl Rasmussen, a researcher and executive vice president of the think tank Eurasia Centre.

“These allegations continue to feed Russiagate hoax stories and act to attempt to continue to use Russia or in some cases China as the target for all things wrong, often due to internal political missteps”, he suggests.

“Perhaps they have been involved in meddling in Russian internal affairs and fear retribution or perhaps they are just seeking someone or something to blame all things on”, Rasmussen adds, noting that this game “is beginning to get old and to be honest quite boring”.

The ‘Scapegoating’ of Russia is Continuing

“What we’re seeing here is an attempt to portray Russia as a possible target, as a scapegoat of problems, noting at the same time that the UK is also threatened by the fight with China over its policies with regard to Hong Kong”, agrees Alistair Jones, associate professor at De Montfort University.

“So, we’ve got Britain here trying to stand up as being one of the great influencers in global politics by picking fights with two of the most powerful countries on the planet”, Jones adds.

At the same time, the hoax may be explained by the UK’s need to consolidate its positions in the post-Brexit world.

“What we have here may be an appearance of some posture, but it is posturing from either the larger economies in the world, or one that is leaving the EU and is having to demonstrate that it can stand on its own two feet”, the professor argues.

The ISC’s report alleged that “open source studies have pointed to the preponderance of pro-Brexit or anti-EU stories on RT and Sputnik”, however, according to Jones, “many other news outlets do exactly the same” when reporting on a bunch of stories in relation to UK, including articles by the US’s Fox News and other media. “This is not unusual or peculiar”, he argues.

Meanwhile, it is “US interference in other countries’ elections and in violent overthrowing of other governments”, including its open support to Ukraine’s 2014 revolution, that became a “matter of historic fact” says British academic and political economist Rodney Atkinson.

“Americans John McCain and Victoria Nuland and the German Foreign Ministry (and German Political Foundations) all aided the violent overthrow of the democratically elected Ukrainian Government”, the analyst says.

However, there are no investigation or reports being conducted in relation to these instances of international meddling.

The Need to Cover Up Mistakes in the UK's COVID-19 Response?

The renewed claims in relation to Russia’s alleged meddling come in the midst of a global pandemic, with Britain topping the list of European countries with the highest death toll, and globally, behind only the United States and Brazil.

For Jones, this shows the possibility that Britain is fighting “multiple fights all at the same time” by “trying to distract from the COVID situation in the UK”, as well as the Brexit saga, and “get alternative new stories in the media”.

“If you were to be cynical, you might suggest that this action is a part to cover up some of the mistakes that have been made as more and more people are looking into what I consider as errors in the British response to the COVID pandemic”, Jones suggests.

But the report and this “Russia-bashing” campaign in British media will do little to save the strained diplomatic bonds between the US and the UK, despite Boris Johnson’s willingness to maintain a good relationship with Moscow, albeit “on British terms”, the professor says.

“The relationship between the two is probably at an all-time low”, he adds. ”it has been since the Salisbury attacks. In the post-Soviet Union era, this is probably the worst period of time that Russia and Britain have had in their relationship”.