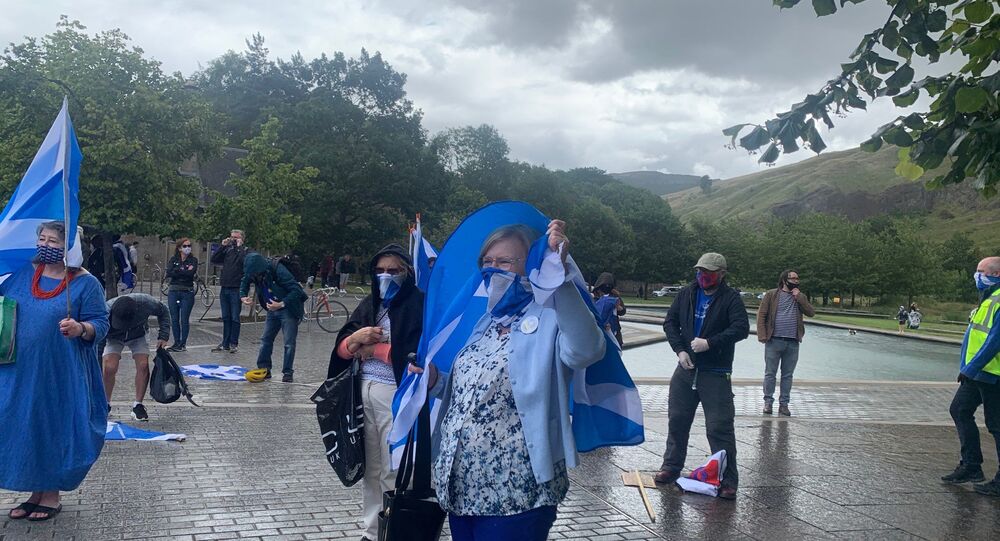 As Scotland slowly begins to ease the lockdown measures introduced to combat the ongoing coronavirus pandemic and with the UK gearing up to totally end its involvement in the European Union at the end of 2020, the campaign for a second vote on Scottish independence has recommenced.

While limited due to the ongoing social distancing restrictions and a feeling of hesitation to attend large public events, the first All Under One Banner demonstration for Scottish independence was held in Edinburgh's Parliament Square on Monday.

While intentionally minimal compared to previous independence protests - seeing a turnout in the 10's rather than the tens of thousands - and in direct defiance of calls by SNP leader Nicola Sturgeon not to hold demonstrations during the coronavirus pandemic, the AUOB movement hasn't lost any of its pre-lockdown vigour.

Coping with the sporadic rain and one-metre distancing enforcement, the attendees stood outside the Scottish parliament building - on top of which the Union Jack is held aloft next to EU stars and the national saltire.

The protestors repeated their single clear demand: "What do we want? Independence!"

Maintaining strict adherence to distancing rules, the protesters heard a series of speakers from across the independence movement.

Chris McCusker, the vice convener of the SNP Socialists, gave the first address wherein he called for "an independent Scottish Socialist Republic".

​"If you want to see a society of respect and equality, then you've got an ounce of socialism with you", he told the eager audience.

Following his speech, McCusker was happy to explain his reasons for organising a demonstration at this time and outlined his vision for how Scotland can achieve the goal of independence while a Conservative and Unionist government holds an 80-seat majority in the British Parliament

"While COVID is going on and we are having to live with it, the question of Scottish independence hasn't dissipated in any way shape or form", he said.

"The wider Yes movement needs to know that people still have this in their mind; the fact that we need to get away from Westminster".

When asked about the concrete steps to achieving a second vote on independence, McCusker was adamant to distance himself significantly from his party and said he supports an effective boycott of Westminster institutions by nationalist representatives.

"The pragmatic way I see it is that our MPs should do the exact same as Sinn Fein done in 1917 and just don't take their seats and we have the chance not to participate in what they want to do".

"It's an old Glasgow saying", he joked. "It's their game and we take away the ball".

Boris Johnson has soundly rejected Nicola Sturgeon's demands for a second independence referendum, citing their manifesto commitment of recognising the "once in a generation" vote in 2014 to keep Scotland within the union.

70-year-old Andrew Hughes said that he comes out to independence rallies every time he can manage.

"I believe in the movement, simple as that", he said.

In response to a question about Nicola Sturgeon urging AUOB not to hold their planned demonstrations amid the coronavirus pandemic, Hughes said he doesn't agree with the first minister's recommendation.

He referenced a previous speaker who dubbed independence an "emergency" akin to the pandemic response, saying he accepts the situation, "but we've got to handle the virus and campaign".

"We've rejected the Tory Party for 65 years in Scotland. We are a country, not an English colony and we do not need to ask any other country for permission to have a vote to control our own destiny", he explained.

When asked if he would, therefore, like to see an independent Scotland re-join the European Union, Hughes said that he is "undecided", but raised the option of Scotland joining the European Free Trade Association instead of seeking full EU membership.

In a press statement made prior to the demonstration, AUOB outlines their explicit demands to "re-ignite the campaign for our independence" as Westminster continues to pursue the UK's complete withdrawal from the European Union - scheduled to end compliance with single market and customs union rules on 1 January 2021.

​Keir McKechnie, an AUOB organiser, said that they want to send a "clear message" to Prime Minister Boris Johnson "and the Westminster junta who wish to strip us of our rights" and to assert Scotland's "democratic rights to self-determination and to independence".

McKenie urged Scotland to make a "clean break from the increasingly right-wing, racist, and unequal UK".

The referendum on independence in 2014 saw a 10% victory for Scotland remaining in the union, but since then the Conservatives have thrice been re-elected, while the UK voted to the leave the EU, largely on English votes and in spite of 62% of Scots supporting remaining in the bloc.

Polling is looking increasingly dire for the unionist camp, showing growing majorities now in support of independence, as well as a landslide victory for the SNP in the 2019 election. This coincides with an announcement by Number 10 on Sunday that Boris Johnson will make a visit to Scotland in an attempt to promote the integrity of the union.

​As sentiment in Scotland and England become more divergent, today's demo is intended to be the first in a series of protests across the country to put the calls for independence back on the table, with events planned on 19 August and 17 September in Stirling and Glasgow respectively.

The Scottish government's decision to keep the European Union flag flying above Holyrood, even after the UK formally left the bloc in January, serves as an act of symbolic defiance of the direction taken by Westminster. If the independence campaign regains its momentum, the image of the Union Jack coming down before the 12 yellow stars is for some a hopeful possibility.

March for Scotland’s Freedom on Saturday – All Under One Banner