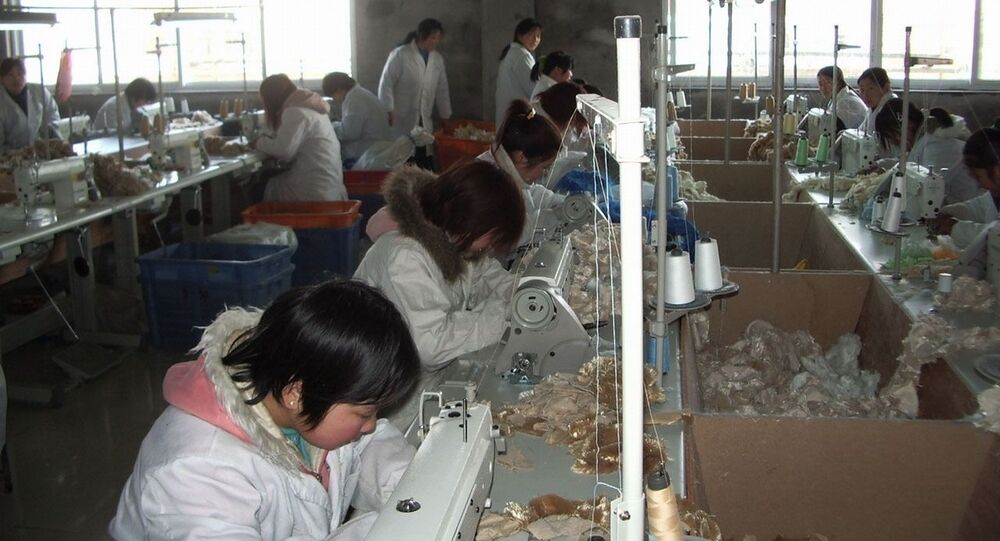 The UK government has yet to tackle the modern slavery problem despite the adoption of the Modern Slavery Act five years ago, British law and human trafficking specialists warn. They claim the legislation does not work, and allows business owners to circumvent its provisions and benefit from sweatshop labour.

"Modern slavery" is thriving in some parts of the UK, with workers in Leicester factories making clothes in unsafe conditions for as little as £3.50 ($4.38) an hour which is far below the UK minimum wage of £8.72 ($10.92), according to The Sunday Times' 6 July report. Modern slavery is defined in the UK as "the recruitment, movement, harbouring or receiving of children, women or men through the use of force, coercion, abuse of vulnerability, deception or other means for the purpose of exploitation".

The Sunday Times' investigation found that it was Nasty Gal brand, owned by UK-based online fashion retailer Boohoo, who has been capitalising on cheap labour. Boohoo's shares plunged dramatically due to the exposure and continued their free fall on 13 July. The reluctance of the law enforcement authorities to confront the illegal sweatshops could be partially explained by fears of being labelled racist, the newspaper alleges, citing Secretary of State for the Home Department Priti Patel, who is now reportedly considering changes to the current modern slavery legislation. Concerns have been voiced by British officials over poor working conditions in Leicester, where many employees of Asian origin are allegedly being exploited.

Boohoo's Excuses are Too Little, Too Late

The focus of this story ought to be shifted from the police and local authorities to the suppliers, the manufacturers, and the businesses themselves, says Jeff Norman, a UK-based modern slavery and human trafficking specialist from Stop Slavery Today. Citing the Modern Slavery Act of 2015, the expert emphasises that business owners have a responsibility to ensure that there's no exploitation within their supply chains. The act, which is designed to combat modern slavery, contains a supply chain clause saying that "big business will be forced to make public its efforts to stop the use of slave labour by its suppliers".

Following The Sunday Times' expose the fashion retailer immediately launched an independent review of its UK supply chain led by Alison Levitt QC. In an official statement Boohoo Group Plc argued that the garments featured in the report "were not actually manufactured in Leicester, but in Morocco". The Group further noted that though it had not found evidence of suppliers paying workers £3.50 per hour but acknowledged the presence of "other evidence of non-compliance with [their] Code of Conduct" and terminated its relationship with suppliers Revolution Clothing Co Limited and Morefray Limited involved in manufacturing of the garments in Morocco and then repackaging them in Leicester.

However, it is not the first time that the fashion retailer has faced criticisms: In June 2020, a workers' rights group, Labour Behind the Label, raised the alarm over the employees of Leicester factories being reportedly "forced to come into work while sick with COVID-19". According to the report, factories in Leicester which are primarily producing for Boohoo, "are no stranger to illegal working conditions, with numerous reports over the years showing low pay – as little as £3 – and blatant intimidation of vulnerable workers".

According to Jeff Norman, Boohoo's hasty investigation into its business chains is too little and too late. Had the retailer complied with its modern slavery statement and made all necessary audits it would have been aware of what is going on within its supply chains, he believes.

"I'm hoping that what's happened in this case with Boohoo will be a real wake-up call for businesses throughout the UK and not just the UK," he says. "And I think it's down to the members of the public to start asking themselves the questions about this one pound T-shirt or this five pound sweater. Where's it come from? How can people possibly produce an item like this for so little? What are the people producing this actually being paid?"

Any new legislation is unlikely to solve the dilemma as the old one is not being properly observed, argues Jeff Norman, referring to the 2015 Modern Slavery Act.

"There is no need for new legislation", he stresses. "The legislation is there and there's none better than the requirement to have the modern slavery statement. But there is no sanction. No organisation has been prosecuted. These modern slavery statements actually comply with the legislation and never mind whether what's written there is actually being carried out. And unfortunately, Boohoo is a typical example of organisations that have come up way short."

The problem of modern slavery in the UK goes far beyond the Sunday Times' expose, admits Aidan Flynn, a constitutional law expert and lecturer at the School of Law, Policing and Forensics at the UK's Staffordshire University. The scholar cites the latest study by the Centre for Social Justice which has revealed that Britain has over 100,000 'slaves', or ten times the official figure, though the country passed the groundbreaking Modern Slavery Act 2015 five years ago.

Following the release of the report Independent Anti-Slavery Commissioner Sara Thornton made an official statement bemoaning the fact that British businesses are not taking the risk of exploitation in their supply chains seriously.

Having said that business owners should lend an ear to Sara Thornton's warning, Flynn underscores that the rights of whistle-blowers reporting the instances of modern slavery should also be protected and their safety ensured.

"You know, we've heard stories in recent days of workers in Leicester giving media interviews and actually being shouted out in the street by perhaps not their own employer, but by another person working in the textile trade. And that's very serious if there is this great effort to intimidate whistleblowers", he highlightes.

However, there's a glimpse of hope as the Leicestershire police have issued a statement saying that they will apply the law and will do so without prejudice, without fear or favour, the scholar emphasises. "And hopefully that's what now will continue", Flynn concludes.