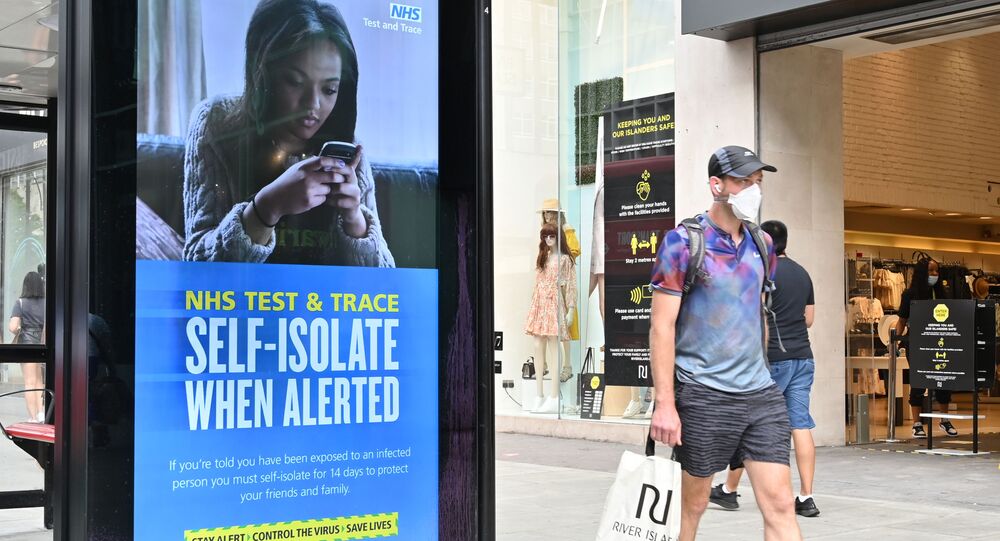 As England began emerging from its lockdown, with pubs, restaurants and cafes opening their doors on 4 July, there have been warnings of a second wave of COVID-19 infections, with scientists from the government's coronavirus advisory group SAGE repeatedly cautioning against a relatively swift easing of restrictions in the country.

The UK government has been urged to get "necessary funding in place", ensure adequate stocks of personal protective equipment (PPE) and ramp up the test and trace system ahead of a potential second wave of the COVID-19 epidemic, reported Sky News.

Ministers have been warned that a second spike of the respiratory disease could result in 120,000 hospital deaths before next June in a "reasonable worst-case scenario", according to a report commissioned by Sir Patrick Vallance, the government's chief scientific adviser, and released by the Academy of Medical Sciences.

The research, contributed to by 37 scientists and academics, does not take into account deaths in the community or care homes.

The experts claim a resurgence of the pandemic could be more devastating than the first wave, with the R rate - the average number of people a person confirmed to be COVID-19-positive passes the virus on to soaring to 1.7 from September from the current R number in the UK, which is at 0.7-0.9.

According to the report, a peak in hospital admissions and the coronavirus-related death tally could be anticipated in January and February 2021.

Previously, ministers have warned that should the R number rise significantly, the UK could be sent back into lockdown under reimposed emergency measures.

One of the authors of the report, Professor Azra Ghani, an infectious disease epidemiologist from Imperial College London, said the findings are "not a prediction" but a "worst-case scenario" that would apply to a situation when the coronavirus outbreak spiralled "out of control", according to the outlet.

"As we move into winter, the weather gets worse, people stay indoors more, windows aren't open so the likelihood of transmission does of course increase… We also have all sorts of other pressures on the NHS that increase during the winter and therefore extra admissions into hospitals. It's all of these things coupled together that could cause this worst-case scenario. We need the systems to be up and running by September," said Ghani.

The need to urgently take government measures to spare the country from being hit hard by a potential second wave of the virus was underscored by Professor Stephen Holgate, a Medical Research Council clinical professor of immuno-pharmacology who led the study.

Insisting that drastic scenarios "could be reduced if we take action immediately", he suggested flu vaccinations among health and social care workers and the vulnerable population, as well as an enhanced "test and trace" programme to ensure a "rapid system of monitoring" that would stave off local outbreaks.

Commenting on the situation, Richard Vautrey, who chairs the British Medical Association's general practitioners committee, said NHS staff were "very tired" after dealing with the COVID-19 outbreak, and were facing a winter scenario forecast as potentially "extremely difficult to cope with".

In response to the report, a government spokesperson reassured that it "represents a worst-case scenario based on no government action, and makes clear this isn't a prediction".

"Thanks to the nation's collective efforts, the virus is being brought under control. However we remain vigilant and the government will ensure the necessary resources are in place to avoid a second peak that would overwhelm our NHS,” said the statement.

The government spokesperson was further cited by the outlet as saying extensive planning was underway to stock billions of items of PPE, and protect the NHS and care sector with expanded testing capacity through NHS test and trace.

Earlier, the government announced it was making face masks in shops in England mandatory from 24 July.

This comes as UK Health Secretary Matt Hancock has promised the country’s "biggest flu vaccination programme in history" will be rolled out this winter.

Speaking at a National Pharmacy Association (NPA) virtual conference on Monday, he said the extra vaccine needed had already been secured.

According to the minister, the Department of Health is looking ahead towards a possible winter surge in demand for NHS services.

"We are currently planning in detail for winter. We are expecting high demand,” said Hancock.

According to the World Health Organisation coronavirus situation report, dated 13 July, the UK has 289, 607 overall confirmed COVID-19 cases, with the death toll at 44,819.