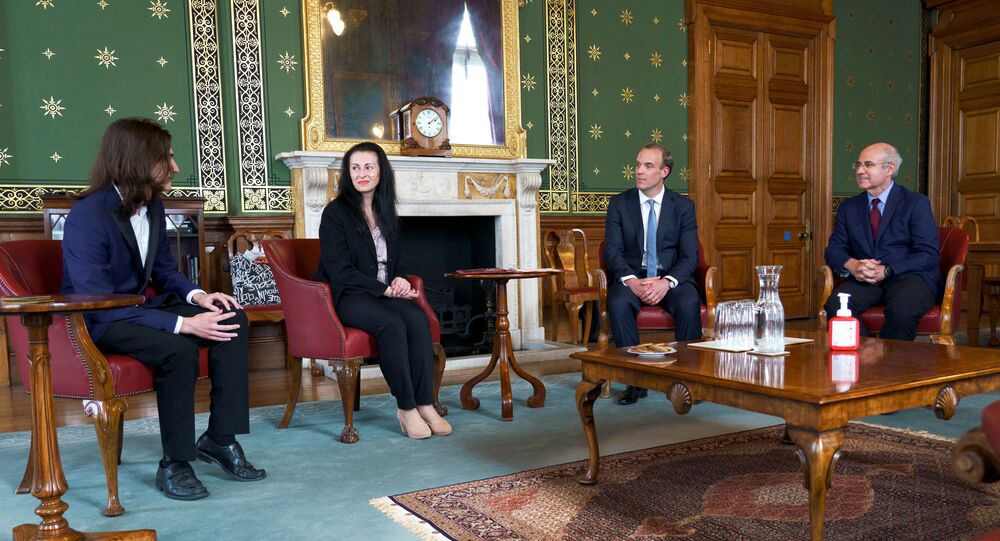 On Monday, the UK Foreign Secretary Dominic Raab announced the first wave of sanctions under the so-called "Magnitsky amendment" to the Sanctions and Anti-Money Laundering Bill, targeting 49 individuals and entities from Russia, Saudi Arabia, Myanmar and North Korea. Observers have questioned the UK's rationale for introducing the new legislation.

Is Britain the Country Entitled to Lecture Others on Human Rights Abuses?

While delivering his speech to the UK parliament Dominic Raab emphasised that the sanctions against alleged "rights abusers" that London is introducing will prevent “those with blood on their hands” from “waltzing” into Britain, buying property and “siphoning dirty money through British banks".

"Who on earth does this man think he is to point at others 'with blood on their hands' in view of UK activity in the Middle East and elsewhere in recent years? This list is as long as a man's arm!" British political commentator David William Norris says expressing bewilderment over what he calls the "arrogance and hypocrisy" of the UK foreign minister.

"Britain has violated virtually every single article of the Declaration of Human Rights repeatedly,” he adds in reference to the British participation in the 2003 invasion of Iraq and other military operations in the region as well the case of Wikileaks publisher Julian Assange.

The UK’s actions in the light of the Julian Assange case look comic, according to Belgian human rights activist Andy Vermaut, who jokes that Britain "should first impose sanctions on themselves.”

"They want to extradite a journalist to the United States and are doing everything they can to make this happen", he says, speaking of Assange, who the UK may extradite to the US where he faces up to 175 years in jail for exposing evidence for US war crimes and other misconduct in Iraq and Afghanistan.

"The Assange case is certainly the most high profile example of double standards of the UK words and actions", highlights Alan Bailey, a UK-based political commentator. "We just cover our acts with a veneer of public relations honed over many decades of practice".

Is Tarnishing Russia a Goal in Itself?

The decision to impose sanctions Russia has a symbolic value, deems Roberto Vivaldelli, journalist and author, as the Magnitsky affair "is in fact used by the propaganda of the liberal Western powers to represent Russia as a highly corrupt and cynical nation", while the real story behind it is far more complicated.

However, it is likely that smear campaigns and sanctions war against Russia will go on, David William Norris foresees. According to him, the Magnitsky affair is a pretext, while the sanctions must be seen in the context of a whole raft of incidents designed to smear Russia and President Vladimir Putin in particular.

The UK and other Western countries are trying to pressure Russia into adhering to their political, cultural and moral values and "join[ing] in their crusade against everyone who will not submit to their aspired world hegemony", the British political commentator adds.

"It is not going to happen and so the attacks and abuse, the military encirclement will continue", Norris says.

Is the UK Truly Independent in Sanctions Policy and Can it Benefit from Anti-Russia Measures?

The UK's new sanctions mark the first time the country has introduced its own post-Brexit scheme focused on tackling human rights abuses independent from the EU. Still, the Magnitsky sanctions regime was first introduced by the US and Britain seems to act as a subservient to Washington, according to Alan Bailey, a UK-based political commentator.

"A great many of our actions on the world stage are either at the behest or in support of US aims", he emphasises. Following Washington's suit, the British parliament passed a so-called 'Magnitsky amendment' to the Sanctions and Anti-Money Laundering Act in 2018. Besides the UK, Canada, Estonia, Latvia, and Lithuania and some other countries adopted their versions of the legislation.

Dominic Raab emphasised that the main rationale behind the government’s decision was "moral" aspect while admitting he was "somewhat worried" about how sanctions would affect bilateral relations with the states they affect.

The United Kingdom should use its exit from the European bloc to establish better bilateral relations with other countries, especially with Russia, suggests Serbian geopolitical analyst Dragana Trifković, director of the Centre for Geostrategic Studies. According to Trifković, the UK's collaboration with Russia both in the foreign policy and in the economic field could have very positive results for Britain post Brexit. Straining relations with Moscow is not in the UK's best interests, she believes.

Given that the UK will be "essentially a lone voice on the world stage" after the withdrawal from the EU, "a fellow independent nation like Russia could and should be a powerful ally", underscores Alan Bailey.

‘Start by Handing Yourselves In’: Brits React to Raab Tweet on Sanctions for Human Rights Violators