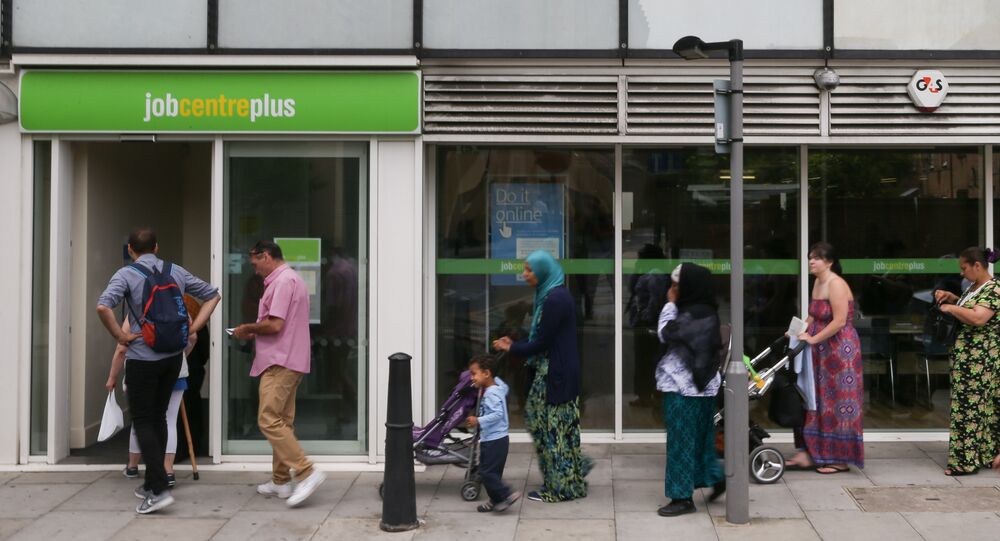 Britain’s economy shrank by a record 20.4 percent in April - the first full month of COVID-19 lockdown, with the country forecast to be heading for the worst recession in more than three centuries amid bleak figures cited by the Office for National Statistics (ONS) regarding the state of the labour market.

Two Tory ministers hailing back to the era of UK Prime Minister Margaret Thatcher have urged the government to draw on lessons of the past, signaling the potential danger of a return to the mass unemployment of the 1980s amid the global economic crisis generated by the coronavirus pandemic, reported The Guardian.

‘Pitchforked on the Market’

Conservative peer Tom King, former UK employment secretary in 1983, when 3 million unemployed people were registered in the country, was cited as urging ministers to gear up for measures to speedily prop up potentially viable companies.

King voiced particular concern over prospects faced by young people, school and university leavers, who are in danger of losing jobs in industries such as hospitality which have been hard-hit by the pandemic.

The rebound in the all sector PMI from a trough of 13.4 in April to just shy of 50 in June suggests there has been a fast initial rebound from the lockdown, but the employment balance suggests there will still be a significant rise in unemployment.https://t.co/Z10MU5Z5zH pic.twitter.com/w1FLxgexdK

“A lot of people who aren’t really prepared are going to be pitchforked out on to the market… This concentration on young people is an important part of it, as we did then with the youth training scheme. That was a hell of a commitment at the time.”

King acknowledged it was unrealistic to “prop up everything” amid the global struggle to reboot economies, but buying time for businesses would be instrumental looking to the future.

“…For everything that has a prospect of returning to good activity, then it’s right to do something.”

King, whose brief stint on the job was under two years, after which he was transferred to the Northern Ireland office, recalled witnessing unemployment rates of up to 20 percent in the province.

Mindful of the social consequences these figures entailed, King said:

“One of the factors that underpinned the sectarianism and terrorism then was the level of unemployment. Among the things that pleased me most is that we managed to get a lot more people into jobs in Northern Ireland. There was no question that idle hands are too easily recruited into terrorism or crime of one sort or another.”

British politician Norman Fowler, who served as a member of both Margaret Thatcher and John Major's ministries during the 1980s and 1990s, and was elected Lord Speaker in September 2016, occupied the position of employment secretary when unemployment levels had dropped. Fowler was quoted as touting the benefits of passing job creation responsibilities to mayors and others with local knowledge.

Fowler said one of the lessons he learnt from his time in office as Secretary of State for Employment, from 1987 to early 1990, was the need for training.

The #YouthCensusReport showed 87% of young people are not confident about finding quality jobs in their area. Youth #unemployment is also expected to rise as a result of the pandemic. #Youngpeople need tailored support & guidance to help them build brighter futures. @YEUK2012 pic.twitter.com/FEGCwRDch4

​Fowler, who was instrumental in setting up local training and enterprise councils, deplored the fact that “all the old jealousies inside government, between departments” had hindered their progress.

“We were very concerned, obviously, about young people getting jobs. But in fact, when it came to it, it wasn’t the young people who were the problem, so much. The problem was the long-term unemployed, who had been displaced from shipbuilding, steel and all the other traditional areas of work,” he said.

Suggesting that the priceless experience of the past should benefit those facing today’s challenges, Fowler voiced confidence that mayors could “get the whole thing moving on a local basis.”

“There’s a great opportunity there, if only we have the wit to take it… There’s more chance of success if you try and organise it with local knowledge, rather than if you try and do it from Whitehall,” said the British politician.

The advice from the political veterans comes as UK unemployment was forecast as likely to soar to levels “way beyond anything we’ve experienced before”.

As the coronavirus pandemic-challenged economy struggles to retain its footing, sectors ranging from airlines to retail are predicted to lose tens of thousands of jobs.

Claimant count measure of unemployment has reportedly more than doubled to 2.8 million since the onset of the pandemic.

The government’s Coronavirus Job Retention Scheme, which is currently paying 9.2 million workers’ wages, is due to be wound down in the autumn, sparking fears the country could be plunged into an abyss of joblessness.

Recent data from the Institute for Employment Studies suggests a second wave of job losses as the furlough scheme is curtailed could lead to the claimant count soaring to 4 or even 5 million as the economy is reportedly on course for the largest recession in three centuries.