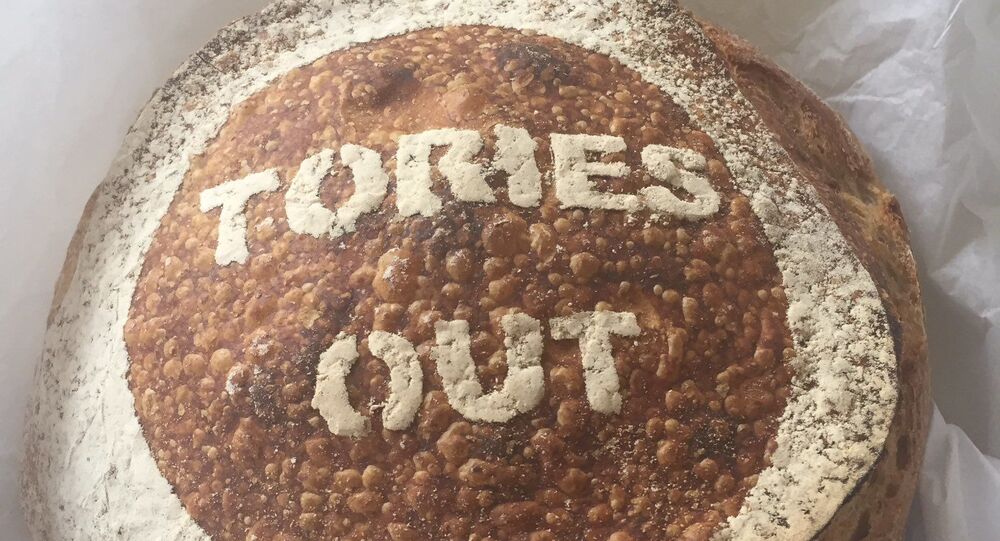 The government’s new advertising campaign encourages people to return to normal life, while taking the recommended precautions to limit the spread of coronavirus. The campaign includes a tv advert welcoming people back to places they missed during lockdown. It includes radio, print, out-of-home, social media and digital activity.

A Yorkshire bakery which sold loaves of bread with “F*ck Boris” stencilled onto them during last year’s election has been featured in the government’s latest public information campaign.

A photograph of Haxby Bakehouse’s owner, Phil Clayton carrying a tray of freshly baked goods appeared in national newspapers on Saturday, with the headline “welcome back to freshly baked bread” as part of a promotion for the government’s “enjoy summer safely” campaign.


The Yorkshire based baker is known for mixing politics with baking. During the 2017 snap election he baked loaves with Corbyn’s slogan, “for the many” stencilled onto them and during the 2016 EU referendum sold bread featuring the word “in.”

In an interview with the Guardian, Clayton demanded that the government remove his photo from the campaign. “I don’t want them to use it. They’ve taken my image without my consent. I’ll have my modelling fee,” he said.

In an instagram post, Clayton wrote that he found it “it quite amusing that HM Government chose to use a picture of me in one of their advertising campaigns. Either someone out there has a great sense of humour or they definitely weren’t “staying alert.”

“These images were taken to help Yorkshire tourism NOT this government. Also there’s no need to “welcome us back” we didn’t go anywhere, we carried on baking and supporting our community.”

Finding it quite amusing that HM Government chose to use a picture of me in one of their advertising campaigns. Either someone out there has a great sense of humor or they definitely weren’t “staying alert”😂😂😂#fuckthetories #fuckboris 😂 @ukgovofficial why are you using my image without permission? Weird choice as I’m a member of @uklabour and as you can see not a fan of this government. These images were taken to help Yorkshire tourism NOT this government. Also there’s no need to “welcome us back” we didn’t go anywhere, we carried on baking and supporting our community. No trips to Durham or to Greece.

“We did a photoshoot at the bakery a few years ago and were part of a video too. It was going to be used for Yorkshire tourism, for the Asian market I think. I seem to remember it was about encouraging Chinese tourism in particular … I didn’t quite realise I had signed up to say they could use the pictures however they wanted. I didn’t realise I was handing them over to Boris to use,” Clayton told the Guardian.

Haxby Bakehouse lost 80 percent of its usual business during lockdown due to not being able to sell supplies to restaurants and cafes and to the closure of farmer’s markets.

In order to keep the business afloat, Clayton received a £10,000 government grant and furloughed five staff members. He continued working three days a week, instead of five, operating a delivery only service.