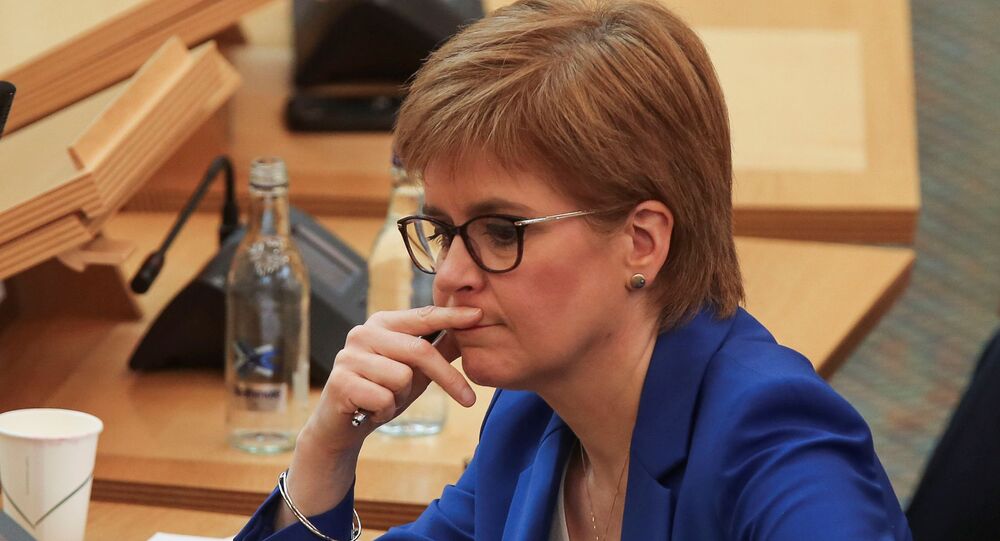 As Conservative Commons Leader Jacob Rees-Mogg put things, it would be "shameful" to erect any walls to stop people moving freely across the UK, in tune with "honourable friend" Boris Johnson’s past remarks.

Scotland's First Minister Nicola Sturgeon wants to "build a wall" between Scotland and England, Jacob Rees-Mogg, the Commons leader, has said, adding it may not be a Hadrian-type or Mexican border-like "bricks and mortar" structure but rather a "metaphorical wall".

During Business Questions on Thursday, the Lord President of the Council called out Sturgeon's "shameful" remarks, in response to SNP Commons business spokesman Tommy Sheppard's comments that their government is "led by someone who thinks the border does not exist".

"He mentions borders, and I noticed that Nicola Sturgeon wishes to have a wall – perhaps she is modelling herself on other leading political figures – between England and Scotland", the Commons chief assumed, further referencing Prime Minister Boris Johnson's words about UK unity:

"As my right honourable friend the prime minister said, there is no border between England and Scotland and it was shameful to call for a border of that type of kind to be erected to stop people travelling freely between constituent parts of the United Kingdom".

Earlier, when asked about a post-coronavirus "cross-border quarantine row", Sturgeon stressed it is a matter of public health, arguing that someone's attempts to turn this into "a kind of standard political, constitutional row, is frankly disgraceful".

Rees-Mogg said in response that emergency provisions are all in place: "£1 billion was made available to help people who are renting and the government is very conscious of the need to protect people who are in the private-rented sector".

He went on to also stress that he sees nothing wrong with Cabinet ministers having to queue up to vote after virtual proceedings were abandoned, in response to Labour's criticism that the measure is time-consuming.

"The speed with which we got through earlier this week was pretty much the normal speed and therefore things are working, government business is getting through, and scrutiny is taking place".

After the UK took the path of phased lockdown relaxation in early June, quarantine measures were introduced for new arrivals in the UK, as well as for those travelling between different parts of Britain. Most travellers to the UK currently have to self-isolate for two weeks, but people arriving in England from countries including France, Spain, Germany, and Italy will no longer need to quarantine starting 10 July, the Department for Transport has confirmed.

The DfT added the devolved administrations "will set out their own approach to exemptions" and passengers returning to Scotland, Wales, and Northern Ireland "should ensure they follow the laws and guidance which applies there".

The Scottish government said last week that it had not yet arrived at a final decision on easing restrictions on international travel.

Wales is also yet to decide whether it will follow England in relaxing restrictions. In Northern Ireland, quarantine rules remain in place for travellers arriving from outside the UK and the Republic of Ireland. In terms of public institutions, hospitality businesses like pubs, restaurantss, and hair salons are set to resume operations on 4 July.

Scotland's Sturgeon: 'We Have to Be Very Cautious in Easing Coronavirus Lockdown'