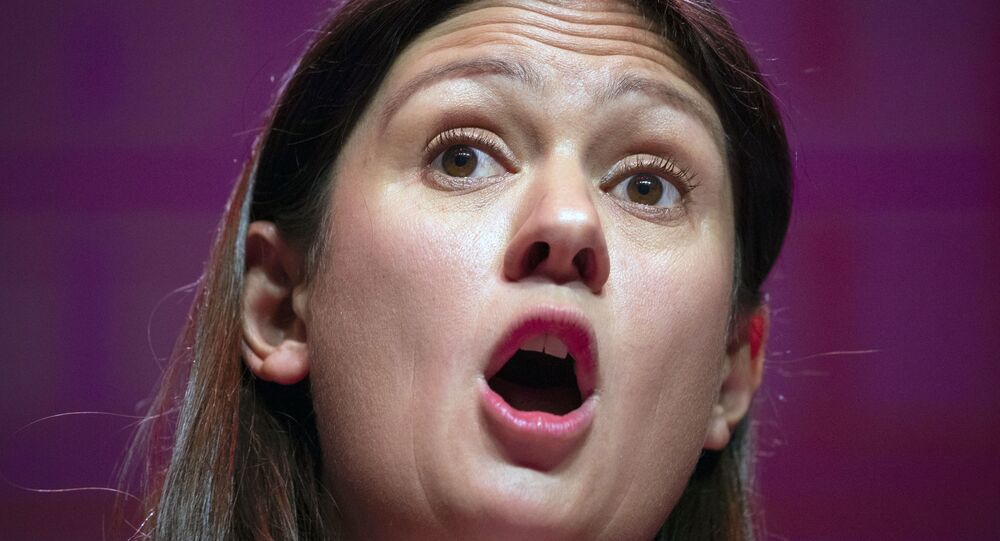 The Labour Party has taken a harsher line on China in recent weeks, offering support for Hong Kong opposition protesters and criticising the government in Beijing for its new national security law.

Lisa Nandy on Wednesday said that China should be removed from involvement in UK 5G network and nuclear power projects over ongoing controversy surrounding Hong Kong.

Speaking to the Times Radio, the UK shadow foreign secretary said that the commonwealth needs “far greater strategic independence” from Beijing and that national security concerns need to be reassessed.

She stressed that the UK should focus on "homegrown" alternatives for energy and high-speed internet supply.

The Labour minister said that the Conservative government has taken “a fairly naive approach to China over the last decade”.

Citing allegations of human rights abuses towards the Uyghur minority in Xinjiang, encroachments on Taiwan and the ongoing situation in Hong Kong, she highlighted previous concerns over the joint construction of nuclear energy and UK security services, deeming Chinese tech giant Huawei as "high risk".

“Four years ago I was the shadow energy secretary raising concerns about Chinese involvement in Hinkley Point nuclear power station,” Nandy said. “Since then, the Government's given a great stake to Huawei in our 5G network further encroachment on our on our technology".

Nandy described the withdrawal by the United States from some of the technology that underpins the 5G network as a "potential game-changer".

"China is now in control of some of the technology that underpins our 5G network", she said.

She said that the UK needs to have "constructive dialogue" with China but also must stand up for "democracy, the rule of law and human rights across the world".

'The UK has to stand up for democracy': Shadow Foreign Secretary Lisa Nandy tells John Pienaar China should be excluded from the UK's nuclear construction sector and 5G network.

​The statement by the shadow foreign secretary aligns the opposition with recent statements from the government in support of the Hong Kong opposition.

On the same day, Prime Minister Boris Johnson said that the UK will open up a pathway for British citizenship for siome 3 million Hongkong residents as he accused China of a "serious breach" of the Sino-British joint declaration in 1984, which was designed to ensure the autonomy of the former colony.

The shift in Labour's position under its new leadership comes amid a backdrop of global pressure from the United States for the UK to fall in line with the Trump administration's foreign policy objectives.

As part of its overarching trade conflict with China, the White House has long pressed the UK to reject Huawei's involvement with the commonwealth's 5G rollout. Trump was reportedly "apoplectic" with Johnson after he agreed to a deal with the Chinese company.

In 2019, the Trump administration threatened then-Prime Minister Theresa May with unnamed repercussions if London allowed Huawei in to the UK's 5G network, suggesting that the move would prevent a post-Brexit trade deal between the two countries.

On Tuesday, the Chinese parliament approved the Hong Kong Security Law designed to outlaw subversion, the undermining of state power and terrorism, while banning political organisations from receiving foreign funding.

China offered that its new Hong Kong law will restore stability in the region and prevent external attempts to divide the country. Opposition activists accused China of infringing the 1 Country, 2 System arrangement, as well as on the civil rights of Hong Kong residents.

The law was adopted following waves of protests in Hong Kong against an earlier push by the region's administration to create what was perceived by many as a closer relationship with Beijing. The Xi administration argued that demonstration organisers were given support by external forces and stated that the situation is an internal matter.

The National Endowment for Democracy (NED), a US-funded organisation, openly provides grants to Hong Kong political groups such as the Washington-based Solidarity Center and the Hong Kong Justice Center.