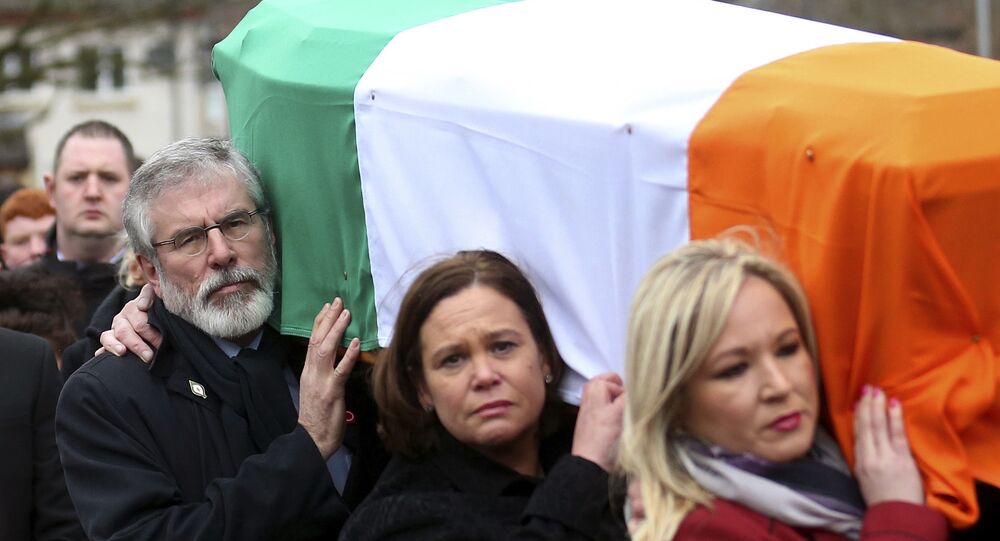 Bobby Storey was the head of intelligence for the Provisional IRA during the mid-1990s, a period when they were bombing and killing British soldiers and civilians. Sinn Féin Vice President Michelle O'Neill was among those at his funeral on Tuesday.

Michelle O’Neill has defended her appearance, along with Gerry Adams and several other senior Sinn Féin leaders, at the funeral of IRA veteran Bobby Storey amid accusations that it breached coronavirus guidelines.

Mr Storey, who died aged 64, was buried in west Belfast on Tuesday, 30 June.

​On Monday the Northern Ireland Executive insisted funerals should be attended by no more than 30 people and social distancing measures must be retained to prevent the spread of the coronavirus.

The irish media are now going to be responsible for dragging the funerals of Det Gda Gerry Horkan and Bobby Storey through an episode of us vs them for pure political gain. Shame on them. pic.twitter.com/OqDo4mHR5L

​The Police Service of Northern Ireland said it would be reviewing footage of the funeral to "consider any suspected breaches” of the Health Protection (Coronavirus Restrictions) Regulations.

Ms O'Neill faced questions about the funeral at Stormont on Wednesday, 1 July.

First Minister Arlene Foster called for her to apologise for her actions, which she said had "undermined" the executive.

Ms Foster said: "It is quite intolerable now that people think that there are some people to whom the law doesn't apply and that indeed there are some politicians who are saying: 'Do as I say but not as I do'."

But Ms O'Neill said: "I am satisfied that my actions are within the regulations and the public health guidance...I think it is unfortunate that a lot of the charges being levelled towards me are political point-scoring, as opposed to actually being about the rules."

The courtage was small in line with guidelines..
100s of stewards ensured 1000s of onlookers kept their distance.
Well managed and respectful in very difficult circumstances.
Anti Republicans are targeting Michelle O'Neill because they hated Bobby Storey. pic.twitter.com/mnmm1gS1gg

​Ms O’Neill, who is Northern Ireland’s Deputy First Minister, insisted the funeral was carried out “in accordance" with the guidelines but she was criticised on social media by many not just for the alleged breach of COVID-19 protocols but for attending the funeral of an unapologetic IRA terrorist.

The BBC said security sources have linked Storey to a number of major incidents during The Troubles and also to the unsolved robbery at the Northern Bank in Belfast in 2004, in which £26 million was stolen.

"Apparently, the coronavirus has mutated to such a degree that it's now able to distinguish between people based on their political beliefs, and makes an exception for United Irelanders." https://t.co/QTSTy8x5BY

​Mr Campbell said: "The people who set the regulations, in other words Michelle O'Neill, have to be very, very clear and precise that they cannot be seen to be physically breaching the regulations that they have set. That is what is causing the anguish and anger in the wider community."

Telling it as it is on the funeral of Bobby Storey. Watch my full contribution on the issue here https://t.co/ugJa59RzxM pic.twitter.com/txCNjTNdHc