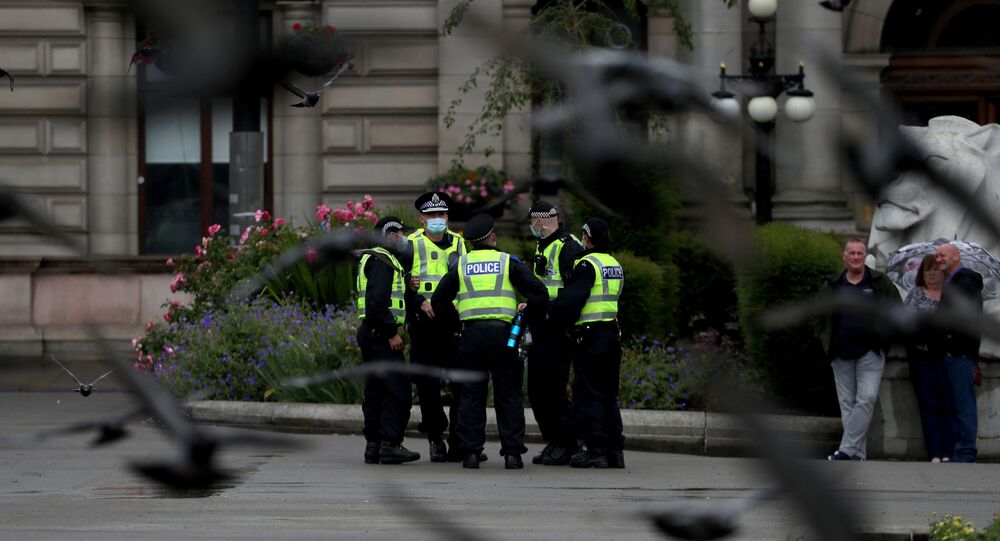 Are Poor Conditions in Glasgow’s COVID-19 Hotels for Asylum Seekers to Blame for Knife Attack?

On Friday, a Sudanese man went on a stabbing spree in a Glasgow hotel hosting asylum seekers. Experts believe the city has been flooded with people fleeing conflict-torn countries as a result of Western military campaigns. The UK has emerged as a top destination for those seeking peace and economic benefits, they note.

A 28-year-old Sudanese native, Badreddin Abadlla Adam, went on a knife rampage in Glasgow’s Park Inn Hotel on 26 June, an attack that left six people injured, including a police officer. The attacker, who was shot dead by police, was one among around a hundred of asylum-seekers housed in the hotel during the coronavirus pandemic, in a bid to prevent their exposure to COVID-19. According to members of the Sudanese community, the suspect’s mental health had recently “deteriorated”.

The government’s decision to place asylum-seekers in hotels was heavily criticised by some pro-refugee groups several weeks ago, with activists sending a letter to the home secretary, Priti Patel, citing concerns over migrants’ mental health and emotional wellbeing. Patel was also earlier urged by civic leaders to raise the asylum-seekers weekly allowance by $25, from around $45 currently.

The Mears Group, the British Home Office’s subcontractor that has been providing housing and support to asylum seekers in Scotland since September 2019, was also criticized for its alleged mistreatment of migrants. The complaints raised by the activists in relation to asylum-seekers were varying from food quality, sanitization and phone top-ups to the company’s allegedly “abrupt” move of the potential refugees to the hotels from their previous accommodation provided by the government.

On Thursday, the Mears Group CEO, John Taylor, said that the company was closely overseeing every hotel where the asylum-seekers were staying, including the Park Inn, but still noted that it could have been “challenging” for many to live in a hotel for months. However, claims over the low quality of food and poor treatment of the guests were dismissed by the group.

Complaints of asylum-seekers about “bad housing” conditions are “deeply offensive” to many Scottish citizens “living in damp, crowded and run-down accommodation themselves”, believes Nick Griffin, former chair of the British National Party and former-member of the European Parliament,

“Compared to them, the asylum-seekers are very well-treated and fortunate”, he adds.

Those seeking refugee status in the UK were actually moved into “nice, smart city-centre-hotels”, including the Park Inn, which was ranked four out of five on TripAdvisor, says Katie Hopkins, UK-based journalist and political commentator.

“It's the sort of place that would be considered a treat for most Brits to go there and have a night, or it would be a luxury most people can't afford”, the journalist argues, while insisting that people who have been put there don’t even have a right to be in the country.

“These are asylum seekers, which is just code speak for illegals who haven't been processed yet. And yet we're paying for them not only to be here, but for their accommodation, their food”, she adds.

Griffin agrees that it is entirely possible now “that a high proportion of those living in temporary accommodation such as hotels have been denied asylum and thus are, by definition, illegal immigrants”, as the government’s funding for permanent homes for those who have been denied refugee status is unlikely to be forthcoming.

Why Glasgow and Why Now?

By the end of 2018, Glasgow was named the “local authority with the most dispersed asylum seekers” in the United Kingdom with over 37,000 migrants holding that status, according to the House of Commons Library. Most of them were provided with accommodation, but when the coronavirus crisis hit the country, around 400 potential refugees were moved from their flats into local hotels, the Positive Action in Housing (PAIH) charity said.

According to Hopkins, it is the financial benefits that the city has received for taking asylum seeker that may explain Glasgow’s willingness to accept so many refugees.

“There will be a certain amount of funding allocated per head that a council or a city council can collect for every asylum seeker they take. So somewhere along the line, Glasgow or the city council has made a profit-based decision”, Hopkins says.

There are also other reasons why Glasgow has turned into a hot spot for asylum seekers in the recent years, experts note.  According to British political analyst Marcus Godwyn, more asylum seekers go to Scotland as England has now become “more skeptical” towards newcomers in comparison to its northern neighbor.

“Some English people have become fed up with being blamed for everything by minority peoples when it seems to them that the English pay and provide everything. There is also the simple fact that Scotland is much less overcrowded than England”, he says.

In general, Godwyn argues, migrants often flee countries which are destabilised and conflict-torn as “the result of western interference in these parts of the world or out and out attacks by the west”.

“We have seen without any shadow of a doubt that armies of new refugees have been used to destabilise Europe”, the expert suggests.

This is echoed by Griffin, who says that “many of the asylum-seekers come to Britain from states that have failed thanks to British and American military interference on behalf of Islamist forces”. He believes that in order to guarantee the safety of British citizens, the country would need to stop accepting new refugees.

According to PAIH director, Robina Qureshi, most of asylum seekers and refuges currently housed in Glasgow’s hotels “primarily” come from Syria, Afghanistan, and Iran and African countries such as Somalia and Eritrea.