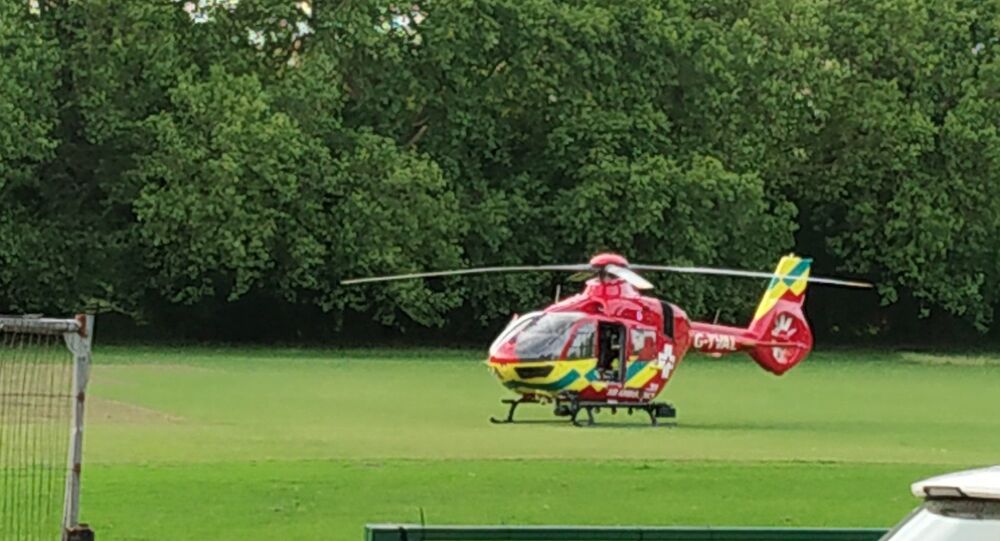 UK's top officials such as PM Boris Johnson, Interior Minister Priti Patel and others reacted to the stabbing that occured in Forbury Gardens, Reading on Saturday, where earlier a Black Lives Matter protests took place. However, according to BBC, the organizers behind the protests said that the incident was not linked to the demonstrations.

Thames Valley Police confirmed in a statement that three people died after an incident in Reading park, adding that a murder investigation has been launched on the matter, as a 25-year-old suspect has been taken into custody.

The statement also clarified that the case is currently not viewed as terror-related, however, "officers are keeping an open mind as to the motivation for the incident".

“This is not currently being treated as a terrorism incident, however officers are keeping an open mind as to the motivation for the incident and are being supported by colleagues from Counter Terrorism Policing South East", Detective Chief Superintendent Ian Hunter, Head of Crime, said in a statement.

We have launched a murder investigation following the deaths of three people in Reading yesterday after an incident in Forbury Gardens.

A 25-year-old man has been arrested on suspicion of murder.

Earlier, Sky News, citing unnamed sources, reported that the incident is believed to be "terror-related".

BREAKING: A source has told Sky News they believe the multiple stabbing incident in Reading is terror-related.

​Earlier, the police confirmed that "a number of people" had been injured and taken to hospital after an incident in Reading park, announcing that one man had been arrested at the scene. A police cordon has been placed around Forbury Gardens, and people are asked to stay away from the area.

​According to initial local media reports, two air ambulances were called to the park as reports emerged that at least 12 people had been stabbed, and at least 3 people had died during the attack.

The Telegraph earlier reported, citing sources, that "three individuals declared dead at the scene and two transferred to the emergency department of Royal Berkshire Hospital".

The number of those dead or injured has not been confirmed.

A number of people sustained injuries and were taken to hospital.

A police cordon is in place in Forbury Gardens as officers investigate.

We are asking the public to avoid the area at this time.

​Earlier, police said that they were aware of reports of an incident in the Reading park, saying that "officers are on the scene and investigating the incident".

We are aware of reports of an incident in Forbury Gardens, Reading.

Officers are on the scene and investigating the incident.

UK Prime Minister Boris Johnson. reacting to the incident, said that his "thoughts are with all of those affected" and thanked the emergency services on the scene.

My thoughts are with all of those affected by the appalling incident in Reading and my thanks to the emergency services on the scene.

​UK Interior Minister Priti Patel expressed concern about the reports, noting that, "My thoughts are with everyone involved, including police and emergency responders at the scene".

Deeply concerned to hear reports of an incident in Reading.

My thoughts are with everyone involved, including police and emergency responders at the scene.

Kit Malthouse, NW Hampshire's Minister for Crime & Policing, expressed sympathies to "all affected", urging not to speculate on the incident.

An horrific, dreadful incident. Deepest sympathies to all affected.

Please do not speculate or share footage online. Help the police. All information should be provided to @ThamesVP https://t.co/eVPVKFlKx7

One shared video showed an X2 Air Ambulance helicopter landing in the area.

​The National Police Chiefs' Council has called against "speculation or sharing of video or images of the serious incident in Reading", advising that the curious follow Thames Valley Police updates on the situation.

Please avoid speculation or sharing of video or images of the serious incident in Reading. An investigation will be ongoing. Follow @ThamesVP for updates.

​Reacting to the incident, the leader of the Reading Council, Jason Brock expressed his gratitude to the police and emergency services, assuring they will have his support.

My thoughts are with all those injured tonight. The Police and emergency services responding have my gratitude and full support and I’d ask everyone in our town to continue to keep clear and let them carry out their work. https://t.co/FvLZ3f1Hmw

​Earlier, he warned people against visiting the area, describing the scene as "a serious incident".

Concerning reports from Reading town centre - please stay clear of the area as Police are dealing with a serious incident. @ReadingCouncil are in touch with the emergency services and will support them as necessary. #rdguk

Earlier today, a peaceful Black Lives Matter demonstration took place in the park, and it is not known whether there is any connection to the incident.