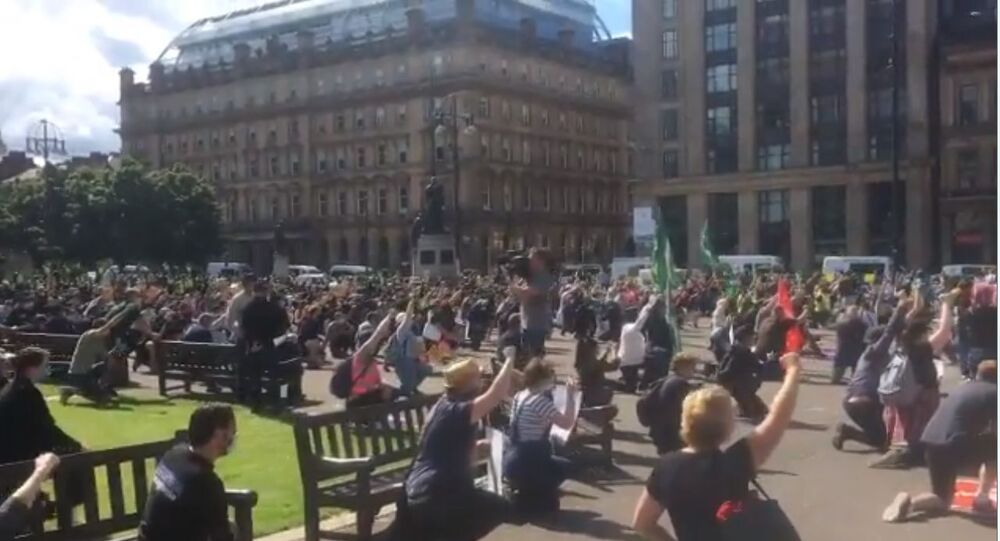 Police were granted permission to search any individual or vehicle at the anti-racism rally in Glasgow on Saturday. This follows the violent scenes which occurred in the city centre on Wednesday, in which peaceful campaigners were targeted for protesting to improve the living conditions of asylum seekers.

Hundreds of people turned up to an anti-racism rally in Glasgow city centre on Saturday, despite warnings to stay at home due to lockdown restrictions.

Justice Secretary Humza Yousaf, Glasgow City Council and Police Scotland had appealed to locals to avoid attending the demonstration organised by Stand up to Racism Glasgow.

On their event page the group had promised the protest would be “socially distanced” while sending a “positive anti-racist message.”

Protesters from The National Defence League also called upon supporters to gather in George Square to “protect the statues” and about two dozen members gathered at the opposite side of the square in counter protest.

Dozens of officers were present in George Square as earlier this week violence broke out in the city as a group targeted peaceful campaigners demonstrating against evictions of people living in asylum accommodation.

Police have announced they will be permitted to carry out stop and searches across greater Glasgow after imposing an Order under Section 60 of the Criminal Justice and Public Order Act 1994.

In a statement Police Scotland said, "In relation to protests in #George Square today Police Scotland has imposed an Order under Section 60 of the Criminal Justice and Public Order Act 1994. This allows police to search any individual or vehicle within the Greater Glasgow area until 11:59pm tonight."

The demonstration on Saturday was in support of UN World Refugee Day with the event page stating, “we want to reiterate our opposition to racism and the treatment of asylum seekers in our city who are being abandoned, made destitute and treated like dirt by the UK Govt’s Hostile Environment”.

​Meanwhile members of the Green Brigade, a group of ultras who support Celtic football club who also attended the protest were hemmed in by the police, according to the Glasgow Times.

It is understood police guided the group through Glasgow in the direction of the Gallowgate surrounded by officers.

​Superintendent Alan Murray, policing lead, said: "Acting on information, at the end of protest around midday, officers contained a large group of people, including individuals identified as football risk supporters, who we believed posed a threat to public safety both within George Square and at other locations.

"We spoke with this group and, at their request, escorted them to the Gallowgate area of the city where they dispersed."

James Kelly, MSP for the Glasgow area, wrote on Twitter: "I am picking up concerns with the way the peaceful protest in George Square has been handled by the police.

"I will be looking into this matter and will raise any legitimate concerns with the police."

​On Friday Police Scotland had urged the public to stay away from the protest to stop the spread of coronavirus.

Chief Superintendent Hazel Hendren said: “The lockdown restrictions remain in place and people should leave their homes only for very limited purposes. Anyone who wants to protest should find another way of doing so that keeps everyone safe.

"The disgraceful scenes we have witnessed in George Square are completely unacceptable and a robust policing response is in place for anyone intent on causing violent disruption."

At least six people were arrested on Wednesday during the rally for asylum seekers.

Glasgow City Council leader Susan Aitken also said: "Please do not come to George Square tomorrow - you will put yourself and others at risk.

"We are at a crucial point in our journey out of lockdown and it remains the case that it is still not safe to gather in large crowds."

"I understand that many will want to make their voices heard. But, for now, I urge you to find alternative means of doing so."