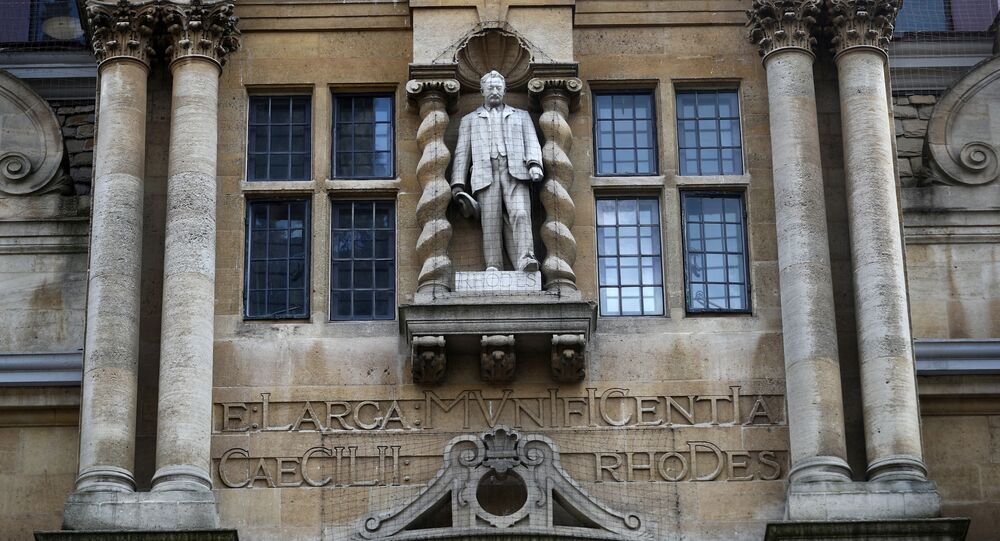 'The Most Savage Brit’: As Tech Entrepreneur Backs Decision To Remove Statue, Who Was Cecil Rhodes?

An Oxford University college has voted to remove a statue of Cecil Rhodes from the building after a protracted protest, which gathered strength after the death of George Floyd in Minneapolis. But who was Rhodes and why do Black Lives Matter activists have it in for him?

A British tech entrepreneur has offered to make up any donations Oriel College in Oxford loses in the wake of the decision to remove the statue of Cecil Rhodes.

Earlier this week Oriel College announced it was bowing to pressure from Black Lives Matter activists and removing the statue.

On Thursday, 18 June, Manchester-born Husayn Kassai - whose parents were Iranian - tweeted that he would “make up for any penny that racist donors pull” in the wake of the controversy. He also referred to Rhodes as “the most savage Brit who ever lived.”

Cecil Rhodes is the most savage Brit who ever lived. @OrielOxford & @UniofOxford I'M PROUD OF YOU. I'll make up for every penny any racists donor pulls. All racist status and symbols belong in museums, where we can safeguard our history, in all its gore and glory. #RhodesMustFall

​But who was Rhodes and why does he stir such passions?

In 1853 Rhodes was born in the English village - now a town - of Bishop’s Stortford in Hertfordshire, just north of London.

He was a sickly child and his father, a clergyman, decided it would be good for his health to send him away to southern Africa when he was a teenager.

Rhodes arrived in Durban in 1870 with £3,000 that a wealthy aunt had lent him and immediately decided to invest it in the new diamond mines in Kimberley.

An obvious point, but: history is not somehow compromised because a statue of Cecil Rhodes is taken down from an exclusive Oxford college. He is simply being judged as a figure unworthy of this sort of adulation in our own age. And that is fine.

​He actually returned to England in 1873 and studied briefly at Oriel College. While there he heard a famous lecture by artist and social thinker John Ruskin, who extolled the virtues of British imperialism.

Ruskin said: "England must found colonies as fast and as far as she is able, formed of her most energetic and worthiest men, seizing every piece of fruitful waste ground she can set her foot on, and there teaching these her colonists that their chief virtue is to be fidelity to their country, and that their first aim is to be to advance the power of England by land and sea."

Rhodes returned to Africa determined not only to get rich but to spread Ruskin’s imperialist gospel and create new British colonies in southern Africa.

An absolutely sensational victory for the #RhodesMustFall campaigners.

Cecil Rhodes was a white supremacist mass murderer who deserves his place in history books as a monster, not someone venerated as a public statue at a prestigious Oxford college. https://t.co/aCaDkWgdeO

​Long before Adolf Hitler coined the term, Rhodes believed the English were a master race and he once said: “I contend that we are the first race in the world, and that the more of the world we inhabit the better it is for the human race.”

His dream was to create British colonies throughout Africa and to be able to run a railway from Cairo to Cape Town without ever leaving British territory.

Britain’s European rivals - especially Germany, who conquered what is now Tanzania in the 1880s - would stop Rhodes’ dream becoming reality.

Oxford University has just announced that they’ll be pulling down white-supremacist Cecil Rhodes’ statue. Students had been campaigning for years, being chased and doxxed by the media and nothing happened.

10 days ago Colston was taken down. Protest works.

​He would eventually give his name to Northern Rhodesia (what is now Zambia) and Southern Rhodesia (Zimbabwe) and would also influence the British government’s thinking in South Africa.

Rhodes, who was busy exploiting South Africa’s gold mines, was adamant that Britain needed to crush the Boers, Dutch settlers who had arrived in Africa in the late 17th century.

By the 1890s the Boers - whose language was now called Afrikaans - had created two independent nations, the Orange Free State and the Republic of Transvaal, in the north-east of what is now South Africa.

Rhodes, who was by now Premier of the British colony in Cape Town, wanted the Afrikaners to become part of a London-controlled South African federation.

The Afrikaners, led by Piet Joubert and Piet Cronje, refused and in 1899 the Boer War broke out.

© REUTERS / Mike Hutchings
A student beats the statue of Cecil John Rhodes with a belt as it is removed from the University of Cape Town (UCT), April 9, 2015

The Boers mounted fierce resistance and the British suffered several embarrassing military reverses. The prime minister, Lord Salisbury, ordered huge numbers of reinforcements to be sent in and by the end of the war there were 300,000 British troops in South Africa, up against 50,000 Boers.

Britain also introduced concentration camps - imprisoning thousands of Boer women and children, many of whom died of starvation and disease.

There is no evidence Rhodes came up with the idea of concentration camps but he was determined to defeat the Boers and believed the ends justified the means.

Rhodes was a symbol of colonialism and in 2015 crowds cheered as his statue was removed from the grounds of Cape Town University.

Good decision. Stick it in a museum alongside information detailing the awful acts Cecil Rhodes committed.

This is not erasing history. It’s understanding it.https://t.co/ZQoqJkn23k

The money was used to create the Rhodes Trust, which was set up to pay for scholarships at Oxford.

Rhodes's generosity allowed thousands of young people to enjoy an education they could not otherwise have had. The first black student won a scholarship 5 years after his death. Why would anyone give to an institution that treats its benefactors this way? https://t.co/RVZWDTzDPG

​The Rhodes Trust has refused to answer questions about Cecil Rhodes’ legacy but a statement on its website says: "We acknowledge that racism has played a significant role in the history of the Rhodes Scholarships. Yes, we have moved beyond our racist and sexist past in important ways.  But we know that much more is required.  We embrace the journey ahead and invite our global Scholar community to join us in shaping it."

The Trust said "today Cecil Rhodes’ original benefaction is a small percentage of our endowment” and they go on to say: "At the Rhodes Trust, our name and our history are a daily reminder of the moral obligation to engage with these issues and to affirm our human interconnectedness in its pain and its hope."