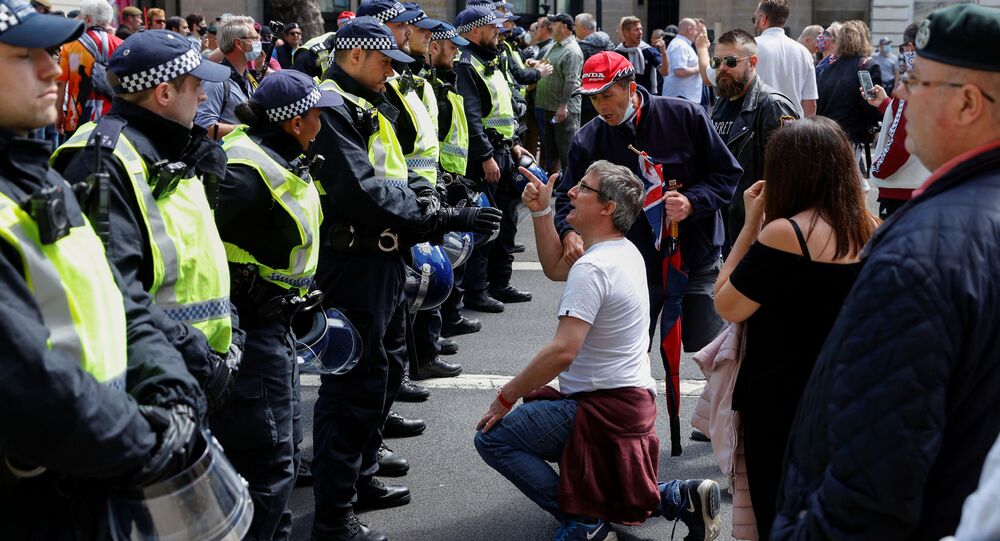 Take the Knee, Or Else! UK Police Force Warns 'Trouble' for Officers Not Showing Solidarity With BLM

Whether or not police officers should ‘take the knee’ has become the subject of widespread debate throughout the UK and US. However, one police force in Britain may have now taken things to a new, and potentially troubling, level.

A UK police force has called upon its officers to “take the knee” as a gesture of solidarity with Black Lives Matter (BLM) protestors, or risk facing potential consequences, according to The Daily Mail.

Hertfordshire Constabulary told officers in a recent operational briefing that those who don’t kneel at rallies “may become the focus of the protestors’ attention.”

“Officers are to be mindful that this [kneeling] is optional and those who do not do so may become the focus of the protestors attention. Any officer who does take the knee must be cognisant of the operational circumstances and to their own, colleagues and public safety,” the briefing states.

The briefing also points out that when officers decide to take the knee it has a “very positive and engaging effect” and a “positive reaction on the protest groups.”

‘Taking the knee’ has become a symbolic act among BLM supporters, and one that they encourage others to do following the murder of George Floyd, an unarmed black man who was killed by a white Minneapolis policeman on May 25 2020.

Yet, there are those who do not agree with the police taking such an explicitly political position.

An unnamed senior detective told the Mail on Sunday that, “it’s absurd. Will officers be expected to make similarly appeasing gestures at political events, far-right protests, for instance?”

The Labour Party’s former Home Secretary, David Blunkett, has also issued words of caution, arguing in The Daily Mail that if police start engaging in such politicised conduct in order to appease BLM protestors, then there is a risk that those officers who refuse to join in may be unfairly accused of racism.

“I am concerned that the gesture of kneeling, though prompted by the best instincts, might give the perception of undermining the role of the police in such situations,” he wrote last week.

“They [the police] are there to ensure a safe demonstration, not to make political statements.” He went on to say that many Brits, “may have been left deeply uneasy at the sight of police kneeling before a protesting crowd… If they attend rallies on their own time, I would have no problem with police making symbolic gestures of solidarity with anti-racists. But it is a different matter when they don thier uniform,” Mr Blunkett added.

Hertfordshire police force came under heavy scrutiny last week over the way it handled BLM protests in the town of Hoddesdon. A group of counter-demonstrators reportedly disrupted the protests by shouting racist abuse. A video from the scene - in which one man can be heard yelling “go back to Africa” - went viral in the Twittersphere. Although police at the scene positioned themselves between the two groups of demonstrators, there was later an eruption of anger that no arrests were made. The force is now said to be carrying out an investigation into the incident.

Ok so for those who say racism doesn’t exist... this was at a recent BLM protest in Hoddesdon,a town in the Broxbourne borough of the English county of Hertfordshire, watch the thread pic.twitter.com/a4shMfiQ7i

The Hertfordshire case is a microcosm of a broader debate as to whether police in the UK should take the knee. Following the murder of George Floyd, Metropolitan Police officers were pictured kneeling outside of Downing Street in front of a line of BLM protestors.