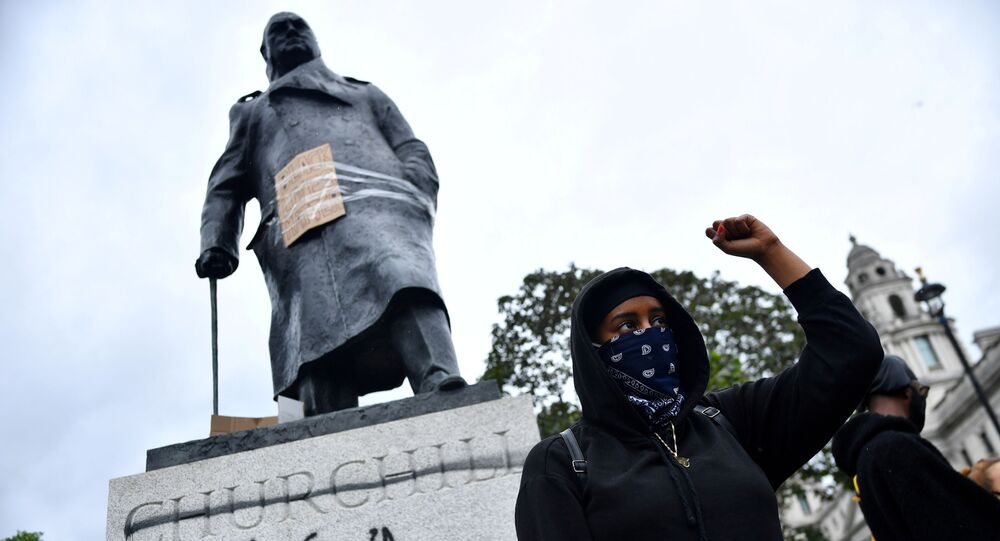 The leadership of the Labour Party has made its position clear that it opposes the destruction of controversial historic monuments amid ongoing demonstrations against racism and police brutality throughout the UK.

Labour's David Lammy said on Sunday that he would oppose the removal of Winston Churchills statue in London.

In an interview with the BBC's Andrew Marr, the Shadow Justice Secretary said he condemned the desecration of the Churchill effigy during a Black Lives Matter demonstration last week and called those responsible "idiots".

"Is anyone seriously calling for Winston Churchill's statue to come down? I hope not", he said.

"He [Winston Churchill] was one of the only MPs speaking out against appeasement. He then, after Chamberlain resigned, became leader and led a coalition government that defeated fascism and for all of those reasons he's hugely respected so I wouldn't support his statue coming down".

Lammy acknowledged that there is a "debate" around Churchills actions around the 1943 Bengal famine under British rule and his repression of the Tonypandy riots.

"Many great figures in history are also flaws and we ought to be able to have that debate as well", he added.

Shadow Justice Secretary David Lammy tells #Marr "many great figures in history are also flawed and we ought to be able to have that debate as well"https://t.co/jZgmjdzkFp pic.twitter.com/QbcA1Ze7O3

​The comments by the frontbencher come as Labour leader Sir Keir Starmer backed a campaign by the Daily Mail on Sunday to protect the statue to the former prime minister.

"Winston Churchill's statue in Parliament Square stands as a tribute to his leadership and the Allied victory in the Second World War. It should not be moved", he said.

Starmer has described the pulling down of slaver Edward Colston last week by Black Lives Matter demonstrators as "completely wrong" but also said that the structure should have been taken down a long time ago.

The state of Churchill was vandalised with spray paint in a later demonstration and has since been covered in a metal box to prevent it from being damaged by activists.

The opposition to protest tactics and the support for the campaign by the Daily Mail - a paper which traditionally supports the Conservatives - indicates a significant shift of this Labour leadership team from their predecessor.

Starmer took over from Jeremy Corbyn, an ardent opponent of the British empire and proposed a policy of including the crimes of imperialism in the school system.

While recognising Churchills role in Britain's victory against Nazi Germany in WW2, the former leader criticised Churchill as someone who did things he "profoundly" disagrees with.

Starmer has been keen to oppose the existence of statues honouring slavers, he has also been clear in his condemnation of the means in which it was done.

This difference has made it difficult for Prime Minister Boris Johnson, who also condemns the defacing of the Churchill statue by protestors, to draw a contrast between himself and the opposition party's stance.