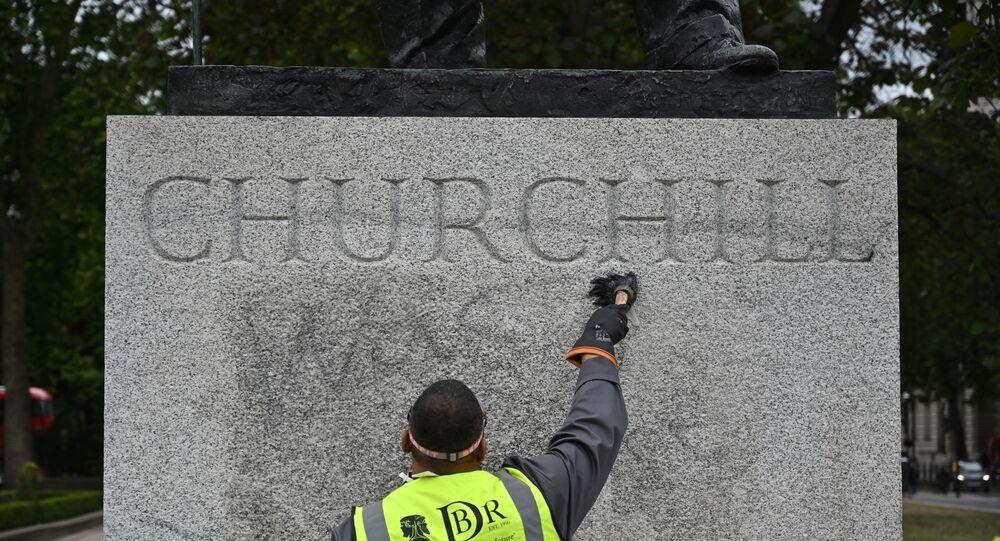 Black Lives Matter protesters have spray-painted “racist” on Churchill’s statue in London, accusing the prime minister of white supremacy. A campaign is gaining traction in the UK to remove other statues linked to racism and slavery, but the government defends them as necessary tool to educate people about past mistakes rather than erase them.

Winston Churchill’s image has mysteriously disappeared from Google search results as the legacy of Britain’s wartime leader is being revised during anti-racism protests.

Social media users in the UK and several other countries have noticed that the photo isn’t showing up in the carousel at the top of the page when they searched for Britain’s prime ministers or WW2 leaders. Instead, it was replaced with a default black square.

The images of Nazi and Fascist leaders, Adolf Hitler and Benito Mussolini, have notably remained intact, according to screenshots of the search results.

I’ve suspected for ages that @Google now only lets us see, read, or watch what it wants us to see, read, or watch. I’ve searched for Brexit articles I know exist, for eg. but can never find them. I thought I might just be imagining it. But no, today I’ve been proved right. pic.twitter.com/PWmy4ISg7r

Hitler, Stalin, Mussolini, google deems these pictures as all good.

Churchill, google deems him to be a racist colonialist, so his picture is no good.

Straight from the Marxism playbook, UK history and identity is being erased, if you stay silent you are complicit, stand up! pic.twitter.com/ZS9F1gagGn

I thought this was a photoshopped wind-up when I saw it on FB, but no - go check for yourselves if you don’t believe me - Google has removed Churchill’s picture from its list of UK Prime Ministers. Are they worried that people will throw paint over their home computer screens??? pic.twitter.com/eJFIQH8Afw

​Users cannot directly upload images into search results, and there could be two reasons why Churchill’s image disappeared: it was either Google that actively removed it or it is being reviewed as a result of users mass-flagging it for removal.

Churchill’s figure has become a subject of fierce debate in the UK in the past week in light of widespread anti-racism protests, triggered by the killing of George Floyd in the United States. Protesters are calling for the removal of statues of figures linked to slavery and racism, a demand backed by some lawmakers.

Black Lives Matter activist Imarn Ayton suggested that such statues are “extremely offensive” and should be moved to museums. “I think it's a win-win to everyone so we no longer offend the black nation and we also get to keep our history,” she told the BBC on Saturday.

The statue of merchant and slave trader Edward Colston in Bristol was toppled by demonstrators last week, and an 18th-century statue of a kneeling black man (which actually depicts a Moor, not a slave) has been removed from the grounds of a National Trust-owned stately home in Altrincham, Greater Manchester. Some other statues have also been removed across the country, including one of Robert Baden-Powell, the founder of the Scouts movement, in Great Manchester and two monuments of Thomas Guy and Sir Robert Clayton in London.

Winston Churchill, considered one of the greatest Brits of all time, has a history of controversial statements on race. He once stated that Indians are “the beastliest people in the world next to the Germans” and said he “did not really think that black people were as capable or as efficient as white people”.

Protesters defaced a monument to the famous statesman in London’s Parliament Square last weekend, forcing authorities to encase it in a box.

Prime Minister Boris Johnson has spoken fiercely against the vandalism, saying that attacking statues amounts to “lying about our history” and that it is “absurd and shameful” for a monument to Churchill to be boxed up because of the protests.

The UK’s culture secretary, Oliver Dowden, said he had written a letter to lawmakers and local councils signalling that the government will not remove any statues or monuments from its property because they should be used to “educate people about all aspects of Britain’s complex past, good and bad, rather than airbrushing history”.