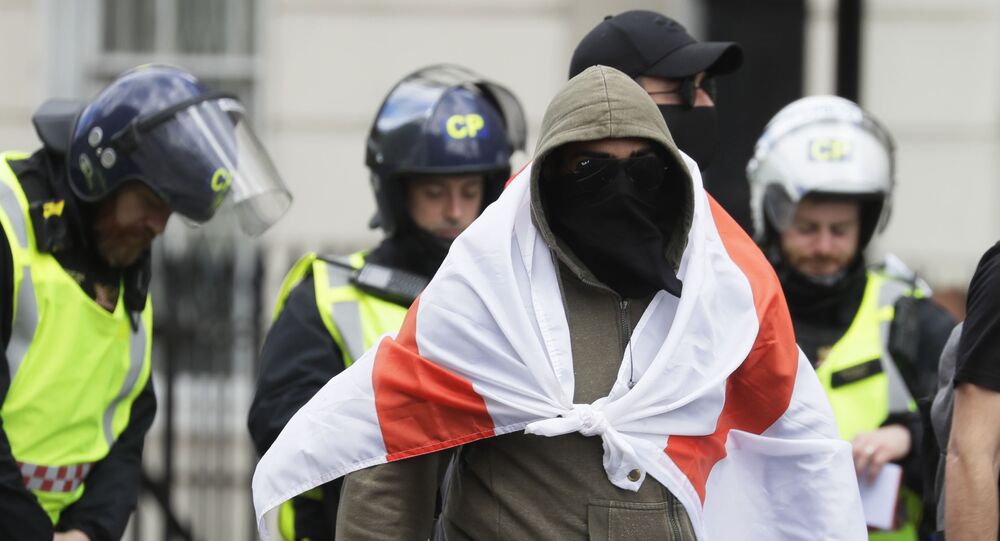 London Protests: Anger and Fury as Man Urinates Next to Memorial of PC Palmer

Hundreds of protesters gathered for a demonstration in London that claimed to protect statues from Black Lives Matter protests. An appeal has been launched to identify a man who urinated next to a memorial for PC Palmer, an officer who was stabbed to death during the Westminster terror attack.

The man who was pictured urinating next to a memorial for murdered police officer PC Keith Palmer has provoked outrage on social media.

Mr Palmer was stabbed to death while protecting others during the Westminster Bridge terrorist attack on 22 March 2017.

The man was one of the hundreds who gathered in Westminster on Saturday in a demonstration that descended into violent attacks on police officers.

Tobias Ellwood, the Tory MP and chairman of the Defence Select Committee who gave first aid to the dying police officer at the time of the attack, shared his outrage on Twitter.

The memorial plaque was erected outside the Palace of Westminster last February as a tribute to Palmer, who died defending Parliament in the attack.

At the time, then-Speaker of the House John Bercow said it would serve “as a lasting tribute to his dedication and his courage” and ensure visitors would “never forget the sacrifice and heroism of this brave British police officer.”

Over the weekend, several thousand activists responded to a social media call-out to “protect the monuments” in response to graffiti on the statue of Winston Churchill and the Cenotaph in London and the toppling of the statue of slave trading merchant Edward Colston in Bristol during the Black Lives Matter protests last weekend.

On Saturday afternoon, the demonstrators allegedly turned on police officers stationed to protect the monuments, with footage online showing bottles and cans being forcefully thrown at them.

A press photographer is believed to have suffered a broken nose in a confrontation with protesters and some journalists present, including the BBC’s Dominic Casciani, said media personnel were being threatened.

Prime Minister Boris Johnson tweeted, “Racist thuggery has no place on our streets.”

Straight up criminal damage! Arrested, in custody? If not, why not? Beyond contempt. A thug in #London today to ‘save our country’ from people defacing memorials, urinating on memorial for #hero #PCKeithPalmer who died tackleing a terrorist - awarded a posthumous George Medal. 👇 pic.twitter.com/hQopUY0eMA

Another Twitter user described the act as a “disgrace to humanity.”

ID this man, he is a disgrace to humanity. far-right protester pissing next to #PCkeithPalmer stone outside @HouseofCommons. @MetCC with the details. RT pic.twitter.com/r692WNfmBl

And a retired police officer called it a distressingly perfect metaphor for the times we live in.

A distressingly perfect metaphor for the mindless madness of the times...

Dishonouring the memory of an extraordinary man who gave his life defending this country from hatred.