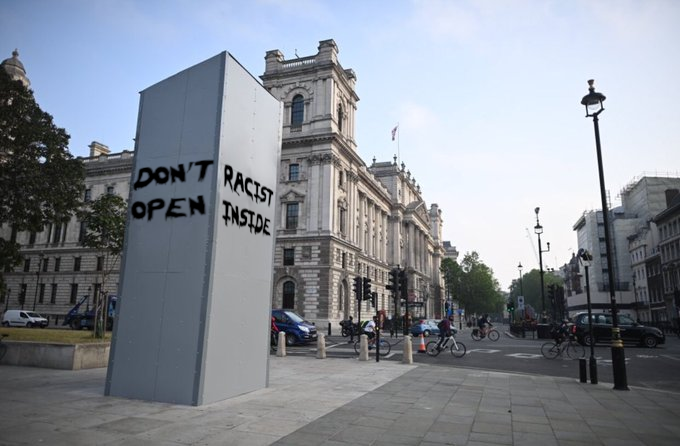 The statue of British wartime Prime Minister Winston Churchill in central London was fitted with protective boards ahead of Black Lives Matter demonstrations, after it was vandalized last weekend.

The boarding up of Winston Churchill monument on the Parliament Square in British capital has already provoked outrage among the UK politicians and public figures, including Prime Minister Boris Johnson, who called the situation “shameful”.

But a new image, which is believed to be photoshopped, has emerged online. It showed that the box covering the statue has now been pained with a “don’t open, racist inside” message, which caused even more stir among social media users. Some however, dubbed it “a work of art”.

Those who fail to learn from history are doomed to repeat it. https://t.co/KHb6SueWzQ

“This is part of where the movement loses me”, one social media user commented the post.

That looks fake. I hope so anyway

Box is real. Lettering is fake.

But many did not doubt the authenticity of the picture, as earlier the Churchill’s monument was indeed vandalized with a “was a racist” message during the Black Lives Matter demonstrations in London last weekend.

Winston Churchill, Christopher Columbus and now Mahatma Gandhi statues have been brought down, accused of being racist.
After Covid, fear the future. pic.twitter.com/TEFIe1l8z7

The decision to protect the statue of the former British prime minister was slammed by many, including UK Home Secretary Priti Patel, who called on the London authorities to “free Churchill”.