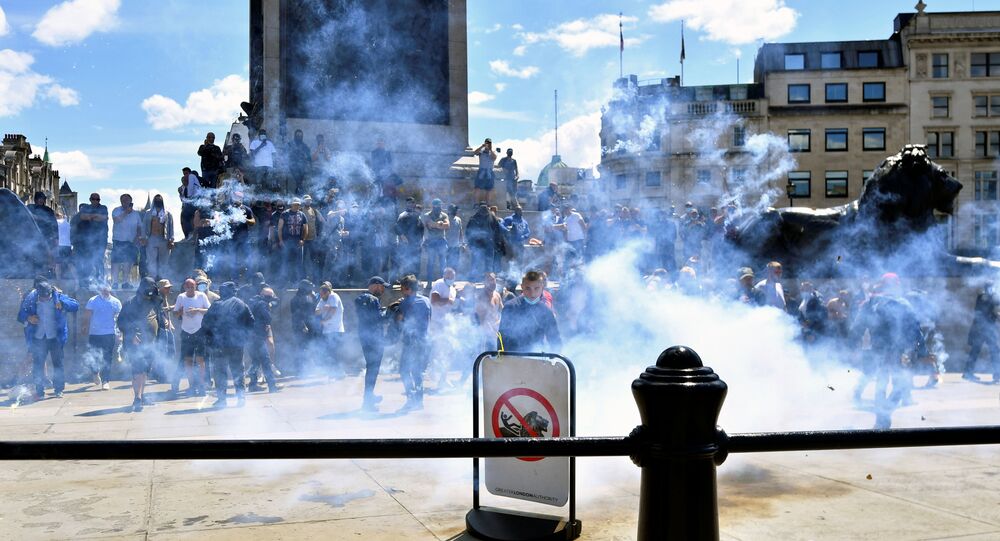 A wave of protests against racial inequality has swept through the UK in the wake of George Floyd’s death in the US city of Minneapolis on 25 May. Over the past week, demonstrators have turned their attention to statues commemorating public figures linked with racism or the slave trade.

Clashes between rival demonstrators and police were reported outside London's Waterloo Station on Saturday evening.

Videos have emerged online showing how tense the situation at the protests is.

​Earlier in the day, scuffles broke out in London's Trafalgar Square between anti-racism protesters and demonstrators who came to protect monuments that have been targeted for their connection to colonialism.

Riot police lined up in the square as two groups of demonstrators, about 100 people each, chanted their slogans. Some protesters set off fireworks, threw bottles and cans.

This is what some wanted violence of BLM pic.twitter.com/HhHRXW7RJI

UK Home Secretary Priti Patel took to Twitter to warn protesters against any acts of violence.

Any perpetrators of violence or vandalism should expect to face the full force of the law. Violence towards our police officers will not be tolerated.

Coronavirus remains a threat to us all. Go home to stop the spread of this virus & save lives. https://t.co/HsOx9cgrqD

​Earlier in the day, activist Tommy Robinson and his supporters gathered in Whitehall to "protect" the statues from possible vandalism by anti-racism demonstrators.

Prior to that, London Mayor Sadiq Khan said that the London Metropolitan Police had received intelligence suggesting that "far-right extremist groups" were going to travel to London to desecrate the statues of figures like former South African President Nelson Mandela and Indian revolutionary Mahatma Gandhi.

During the previous protests earlier this week, the Cenotaph war memorial and a statue of former Prime Minister Winston Churchill in Parliament Square were defaced. Fears of further violence have prompted London Mayor Sadiq Khan to construct protective barriers around both landmarks in a bid to prevent further damage, although concerns remain as to whether the police will be able to prevent further disorder.