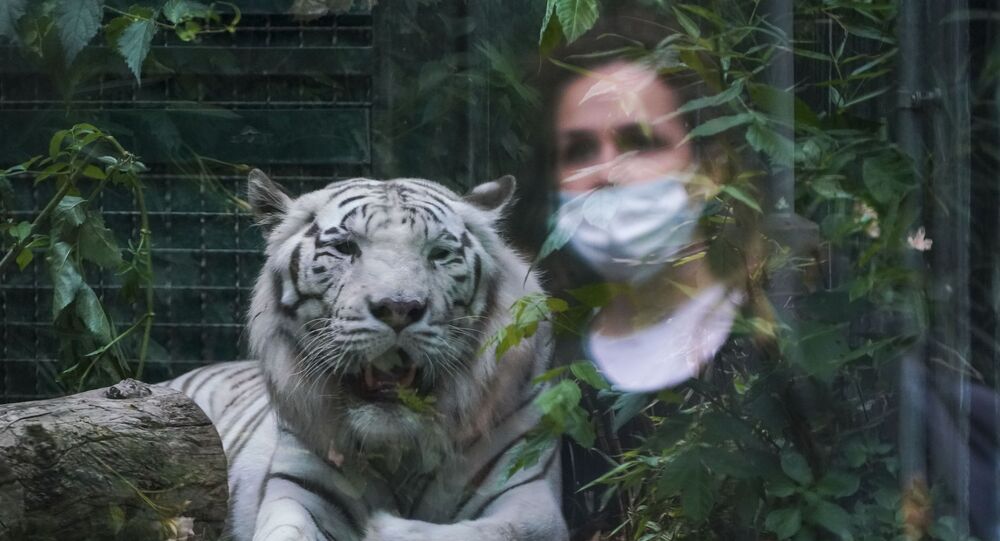 Several British zoos, including the ones in London and Chester, are in financial dire straits as a result of the coronavirus outbreak. Animal welfare campaigners say the lockdown should be a moment for the UK to think whether it really wants to keep zoos in the long-term.

Boris Johnson has announced that zoos, safari parks and other outdoor attractions can reopen from next week as long as they respect social distancing rules.

Several Conservative MPs and the prime minister’s own father, Stanley Johnson, had called for zoos to reopen so they can survive the crisis.

But animal welfare campaigners think the lockdown should have given the government pause for thought and have called for zoos to be phased out.

Last year Dr Madelon Willemsen, CEO of British and Irish Association of Zoos and Aquariums, said: "People will always visit zoos and aquariums; they are firmly embedded in British and global cultures.”

​But Sam Threadgill, a spokesman for the Freedom For Animals charity, said: "Freedom for Animals has noticed quite the opposite. Most recently, with the current lockdown situations that many are facing throughout the world, people are empathising much more with the suffering involved in containment and captivity."

​He said: “Zoos and aquariums belong to a bygone era of exploiting the natural world and with the rise of amazing documentaries, virtual reality and eco-tourism, there are now more ways than ever to connect with the animals we share this planet with without exploiting them.”

Mr Johnson announced that zoos can reopen from 15 June, along with non-essential shops such as hair salons and clothes shops.

© REUTERS / Loren Elliott
A giraffe is seen in front of the Sydney Opera House at Taronga Zoo Sydney as it re-opens to the public amidst the easing of the coronavirus disease (COVID-19) restrictions following an extended closure in Sydney, Australia, June 1, 2020.

London Zoo, which has been closed since 20 March, said recently it faced an "uncertain future" without immediate support.

One of Britain’s oldest and most popular animal attractions, Chester Zoo, has been closed since 21 March. It costs £1.6 million a month to run and gets 97 percent of its income from visitors.

On Sunday, 7 June, several Conservative MPs held an online meeting with the animal welfare minister, Zac Goldsmith, and he promised "whatever it takes" to support the zoo during the pandemic.

​Mr Threadgill told Sputnik: "The welfare of the animals held within these zoos is of primary concern and as such any further suffering caused by financial hardship would be unacceptable. However zoos must not be allowed to carry on exploiting their animals indefinitely and should commit to cease breeding, and adopt a strategy of winding down, involving rehoming and rewilding their animals."

In April it was reported that Neumünster Zoo in northern Germany was considering feeding some of its animals to other inmates because it could not afford to feed them.

​Mr Threadgill said: “The comments made by Neumünster Zoo regarding euthanasia of their animals were deeply concerning. Similar threats have been made by UK zoos, including Tropiquaria in Somerset and Borth Wild Animal Kingdom in Ceredigion.”

He said: “Zoos are no strangers to killing the animals supposedly held in their care, for example, European zoos cull an estimated 3,000 to 5,000 animals per year simply for being 'surplus' or for having the wrong genes for breeding.”

​Last year the UK government banned wild animals in travelling circuses and said it was serious about animal welfare but it said it had no plans to phase out zoos.

Mr Threadgill said: “These two positions do seem quite contradictory. The science demonstrates that zoo enclosures can never provide adequate environments to meet all of the diverse and specific needs of wild animals. A government truly committed to animal welfare would recognise the need for a phasing out of zoos and aquariums and instead the ramping up of resources for in situ conservation projects.”

​Zoo owners often claim that animals born and brought up in captivity would not survive in the wild, so it is not possible to just release them.

Mr Threadgill said that was not always the case and he pointed to a recent experiment by English businessman and conservationist Damian Aspinall, who is in the process of releasing his captive-bred cheetahs into a reserve in Africa.

He said: “Where possible, animals in zoos should be released into the wild and those for whom this is not an option should be rehomed in species appropriate, non-breeding sanctuaries that resemble their natural habitat as much as possible.

“Perhaps the most important step in achieving an end to zoos would be for zoos to commit to cease breeding their animals. The breeding programmes undertaken by zoos serve, in the vast majority of cases, to only repopulate their centres and to produce more animals for their customers to view,” said Mr Threadgill.