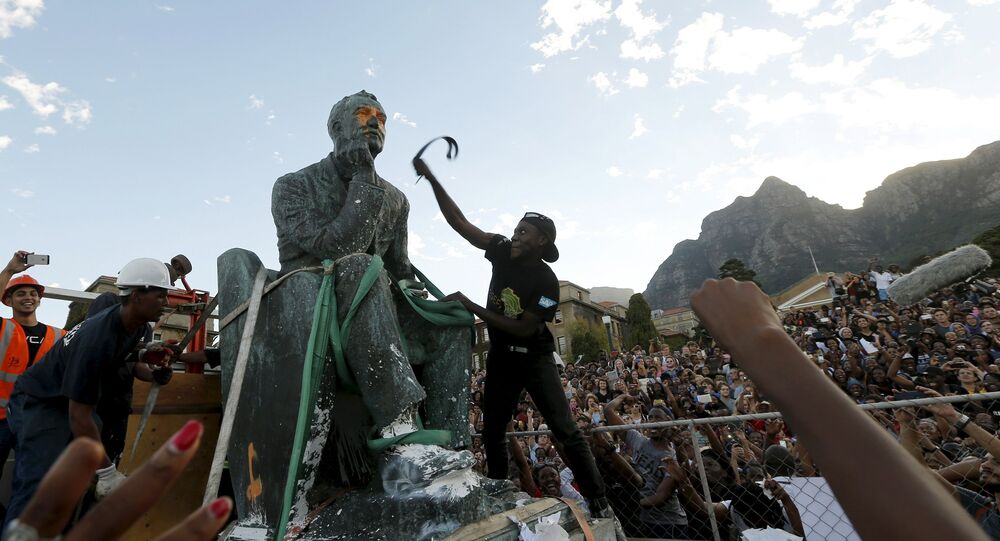 Organisers say the protest will be peaceful and physical distancing observed. A list of Rhodes Must Fall’s demands, which include addressing underrepresentation and lack of welfare provision for black and minority ethnic students and staff, will also be read out.

The toppling and throwing in a river of a statue of slave trader Edward Colston at a Black Lives Matter protest in Bristol 7th June has reinvigorated an ongoing campaign to remove a statue of controversial Victorian imperialist Cecil Rhodes at Oxford University.

The Rhodes Must Fall campaign called for a demonstration 9th June outside Oriel College, where a likeness of Rhodes, who supported apartheid-style measures in southern Africa, is mounted on a wall.

In 2016, hundreds of Oxford students campaigned for its removal and the university curriculum to be updated to reflect diversity of thought beyond - but the University said the statue would remain. Some suggested the prospect of Oriel College losing up to £100 million in gifts should the statue be removed may have been a disincentive. Former Conservative MP Chris Patten, chancellor of the university, said in a BBC interview at the time students who didn’t like the statue should consider studying elsewhere.

​Due to the College’s intransigence, the campaign and associated demonstrations gradually died down. However, after Black Lives Matter protesters attached a rope to the Grade II-listed of Colston - on Colston Avenue - and pulled it to the ground to raucous cheers, the Rhodes Must Fall movement has gained fresh purpose and vigour, and a protest is now planned for 9th June.

“What happened in Bristol is the catalyst for this protest. We’re seeing a global surge against anti-blackness which has allowed us to rejuvenate that debate. It’s what we saw with Colston – it was Black Lives Matter who took down that statue of a slave owner. We’re reaffirming our demands to Oxford that they should themselves take this down as a matter of principle and matter of urgency,” Femi Nylander, a Rhodes Must Fall organiser, told The Guardian.

Liberal Democrat MP for Oxford West and Abingdon Layla Moran said statues of white supremacists and slave merchants “should not still be standing in our cities”, and “the statue of Cecil Rhodes must come down” as a result. Dismissing suggestions she was endorsing vigilante action, she went on to urge Oriel College “to think about what message this statue sends in 2020, and remove it”.

Thames Valley Police said in a statement they support the public’s right to peaceful protest and are working constructively with organisers to protect those rights.

“We’re committed to facilitating a peaceful protest and the right to freedom of expression, whilst also keeping the community safe. The police force urge the public to follow the restrictions set out by the government to prevent the spread of Covid-19,” the force added.

​The son of a vicar, Rhodes grew up in Hertfordshire, but was sent to South Africa by his family at 17 in the hope the climate might improve his poor health. He entered the diamond trade the next year, and over the next two decades gained near-complete domination of the world diamond market - his De Beers diamond company, formed in 1888, retains its market dominance today. He entered the Cape Parliament at the age of 27 in 1880, and a decade later became Prime Minister. After overseeing the formation of Rhodesia during the early 1890s, he was forced to resign 1896 after a calamitous unauthorised attack on Paul Kruger's South African Republic (or Transvaal). He died in poor health in 1902.

One of Rhodes's primary motivations in politics and business was his professed belief Anglo-Saxons were "the first race in the world", and "the more of the world we inhabit the better it is for the human race". As a result, he advocated violent settler colonialism, describing indigenous Africans as being "in a state of barbarism", and advocated their total governance by white men as a "subject race". Historian Richard A. McFarlane has described Rhodes "as integral a participant in southern African and British imperial history as George Washington or Abraham Lincoln are in their respective eras in United States history”.

“To think of these stars that you see overhead at night, these vast worlds which we can never reach. I would annex the planets if I could; I often think of that. It makes me sad to see them so clear and yet so far,” he said in his last will and testament.

History’s Awkward Reminders: Why UK Slave Trader Won’t be the Last to Have His Statue Torn Down