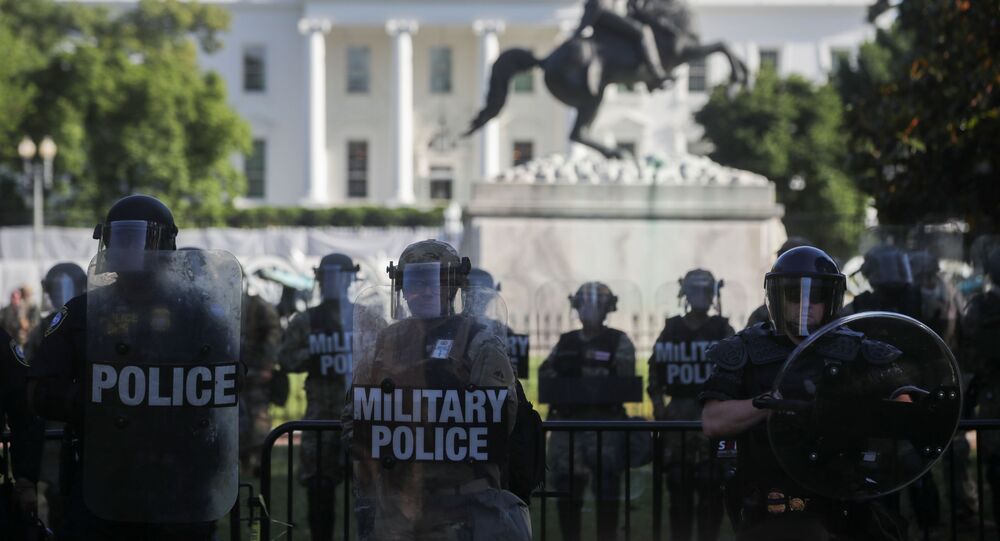 A speech by one of Britain's most vocal politicians addressed the ongoing civil unrest in the United States following the death of an unarmed Black man in Minneapolis in late May.

Workers Party Britain leader and former British MP George Galloway held an online discussion earlier this week on the dynamics of race relations in the US.

Galloway's 'Anguish in America' speech addressed numerous concerns on systemic racism in the United States to audiences attending the online speech, and was followed by discussions from attendees.

The speech comes as dozens of cities across the US remain under lockdown following mass demonstrations and riots, with further ongoing rallies taking place in London, Paris, Berlin and numerous other countries.

Sputnik takes a closer look at the highlights of the speech.

A History of Violence, Slavery, Genocide

Galloway began by speaking on several examples of state force oppression, including the Yellow Vests in France and Miner's Strike in 1984.

"I'm making the point that you don't need to be Black to be oppressed, repressed and brutally quashed by the ruling elite and its system," he said. "I was at the front of brutal repression by the British state forces of an overwhelmingly white, working-class uprising in defence of their families their communities, their work, their livelihood."

But America's "extraordinary ethnic complexity" included millions of Africans taken as slaves on vessels made by shipbuilders in Bristol, Glasgow, Liverpool and London, among others, he said.

Speaking on America's system of chattel slavery: "The slave owners would make an inventory of their assets, which would include the number of cows that they had, the number of sheep and the number of slaves—usually in that order."

Despite the end of the slave trade after the Confederate defeat in the American Civil War—one of the world's bloodiest conflicts—the US Calvary launched pogroms against indigenous American Indians in Western territories, he added.

"[America] is breathtaking, but this Garden of Eden, because of how it was obtained, and how it was built, has been cursed from the beginning with the scars that we are seeing lividly exposed this week on the television," he said.

Separate, But Unequal - Jim Crow Laws in the US

Jim Crow laws established in southern US states continued in the 1960s, despite officially ending after the Civil Rights Act 1964 and Voting Rights Act 1965, he said, citing examples in the entertainment industry at the time.

"Black people could legally piss in the same pot as white people by the end of the 1960s, but it would be viewed askant if they did, and what Malcolm X called the “internal colonies” of the United States, the ghettos overwhelmingly populated by people of colour... are continued as colonies," he said.

Mr Galloway explained how workers in the US, namely those of colour, were "overwhelmingly" exploited and received widespread discrimination "at every level", including earning the lowest pay and "least secure terms of employment".

One example of US racial violence was the prosperous 'Black Wall Street' in Tulsa, Oklahoma, where Blacks were massacred with the support of police "who stood by and allowed it to happen, he said.

"Tulsa, Oklahoma, 89 years ago, was a kind of New York City. It was booming. A black middle-class was emerging, and that was the problem that could not be countenanced, and 200 black people were murdered that day, 89 years ago. And the businesses were, of course, burned to the ground, the scorched Earth being all the remained," Mr Galloway explained.

The Whole World Is Watching: The Filming of Police Brutality

Numerous social media videos involving police brutality had gone viral in recent years, with some earning up to 50m views.

"I've just seen one in Texas, which will startle you even in the teeth of what you've seen this week—a 16-year-old boy shot dead in the head by a sniper whilst standing peacefully protesting a good distance from the security forces," he said.

“Racism is not getting worse, it's being filmed”, Galloway said, paraphrasing actor Will Smith.

But such videos were "changing the terms of engagement" and had "moved masses in the United States", he said.

"That has changed sadly for the worst, but for the better, the young people of America of all colours have mobilised in the millions this week since the lynching of George Floyd," Galloway added.

But the WPB did not back riots as they failed to advance working-class politics, but empowered reaction, he said, adding that such practices went "up like a rocket, but they come down like a burnt stick".

When civility leads to death, revolting is the only logical reaction.

"[The] vast majority of the people out on the streets in the United States are not there to grab a pair of Nike trainers through a broken window. They are there to confront the racism, injustice, inequality of life for the mass of the people, in the internal colonies the Malcolm spoke about", he said in reference to provocateurs attending the rallies.

US Racial Inequality, By The Numbers

According to recent figures, over 50 percent of US citizens suffered from poverty or 'near-poverty' and "could not survive a $400 emergency" on cash or credit, he explained.

Over one hundred Americans now had no health insurance, he explained, adding: "[That is] the 70 million that never had it, added to by the mass unemployment which now exists amongst all ethnic racial groups in the United States."

But roughly "0.1 percent" of Americans had "lives of gilded luxury" in places such as the Hamptons, Beverly Hills and parts of Manhattan, among others, Galloway said.

"0.1 percent of the America’s population live lives of unimaginable luxury whilst half of the people live lives of absolute poverty," he said.

Conditions For Fascism Rising in the US Under Trump

US president Donald Trump's call to deploy the military had sparked "great shock around the United States" and the world, Mr Galloway said, referencing America's long history of militarisation.

​But the "deafening silence" from Democrats controlling states like Illinois, New York and others indicated that Republicans would "find no real opposition", he said.

Fears the US military may be "deployed on the streets of American states" refusing to call on the National Guard or militarise the "tinder-box" situation could reignite by President Trump's message, he said.

— The Mother of All Talkshows with George Galloway (@MoatsTV) June 1, 2020

"[Trump] has seen a moment to militarise the streets to create an us-and-them dichotomy. He sees the Democrats paralysed like rabbits in the headlights on the highway, unable to decide which way to go [for] the first time since the US Civil War, a hundred fifty years or so ago", he explained.

But armed militias threatened to further increase tensions across the country, with possible clashes with protestors and bystanders, he said.

"A massacre could very easily happen in the States in this fibrous atmosphere," he said, noting Trump's response to the storming of the Michigan State Capitol Building, which forced governor Tim Walz to flee in late April.

"You saw a taste in Michigan State in the Capitol Building when heavily armed men with automatic weapons protesting about their need for a haircut, against the lockdown, actually stormed the building without a single tear gas canister being fired. Without a single rubber bullet being deployed against them," he said.

Mr Galloway ended his speech with comments on US soft power globally, which he said had been "utterly devastated" by events in Minneapolis.

He concluded: "Finally, the idea dies that the United States, of all people, has the right to police the rest of the world when it cannot police its own streets without gunning down innocent, unarmed, peaceful people and where black bodies continue to twist like strange fruit, not just from Southern trees, but on the streets of Minneapolis, too."

The speech follows waves of protests against police violence in the US following the death of Mr George Floyd, who was murdered in late May while in police custody in Minnesota. A white police officer was filmed suffocating Floyd with his knee for roughly eight minutes as the victim remained handcuffed and complained he was unable to breathe.