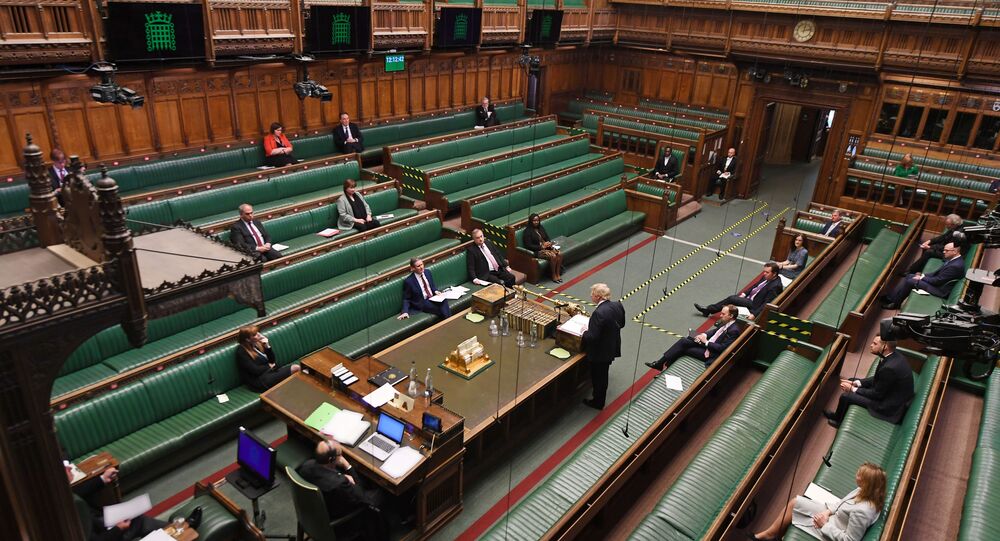 In April, the UK House of Commons announced changes that stipulated 650 lawmakers voting by video link due to the coronavirus pandemic, a temporary measure which was widely used throughout May.

On 2 June, British lawmakers will return to Parliament to decide on ditching a system of remote voting which has been in place since last month.

The Tuesday gathering should also determine the new procedure of voting which envisages that “MPs would have to travel to Westminster to debate and vote in person while following [two-metre] social distancing rules”, according to Sky News.

This will reportedly result in at least a kilometre-long queue snaking out of the debating chamber and spreading further into a Westminster building.

Commons Speaker Lindsay Hoyle admitted that “it is not perfect, it will take time, and members will need to be patient”, adding that “it is the safest method I can think of”.

Jacob Rees-Mogg, the government’s leader in the House of Commons, in turn, called for an end to the so-called “hybrid” parliament, pointing out that “Westminster has been the seat of our democracy for centuries” and that “it will take more than the coronavirus to change that”.

He also wrote in the political magazine The House on Monday that “politics is better done face-to-face, even if the whites of the ministerial eyes are six feet away”.

Former Labour minister Chris Bryant, for his part, was not that optimistic about the new voting system, saying, “it will be like queuing for the Eiffel Tower; we'll look like the stupidest parliament in the world”.

The UK-based political pressure group Electoral Reform Society slammed the system as something that is "beyond a farce" which the group claimed would discriminate against those lawmakers who cannot attend parliamentary meetings in person for health problems.

The view was supported by Conservative MP Robert Halfon who rejected the new voting-related proposals as "absolutely not right and democratically unjust".

Shadow leader of the Commons Valerie Vaz, in turn, asserted that the proposals would “result in two classes of MPs”, adding "the abolition of the hybrid remote parliament which allowed all MPs to take part regardless of their personal circumstances is discriminatory and would not be acceptable in any other workplace”.

Additionally, an unnamed former Tory cabinet minister was cited by Sky News as saying that the government will most likely approve the “ridiculous” new voting even though it had attracted "a lot of opposition in the party".

"It makes no sense to me, to disenfranchise people and their communities on the grounds of health. […] The government are burning up a lot of capital here, especially after Cummings. MPs can't even go to the chamber in greater numbers, they would just sit in their offices and then queue for hours to vote, when they could do it in seconds online”, the minister said.

They apparently referred to UK PM adviser Dominic Cummings who hit the headlines last month after media reports emerged saying that he had driven with his family to Durham on 27 March while all non-essential travel in the UK was banned due to the coronavirus outbreak.

Cummings denied any wrongdoing, insisting that he travelled to Durham to ensure that his 4-year-old son could be looked after if he and his wife, who both had coronavirus symptoms, became sick.

In mid-April, parliamentary authorities gave the green light to plans allowing as many as 120 members of parliament to participate in virtual sessions via the video conferencing software programme Zoom.

Only 50 lawmakers were permitted in the House of Commons, the UK's lower house, at one time, according to the proposals backed by Speaker Lindsay Hoyle.