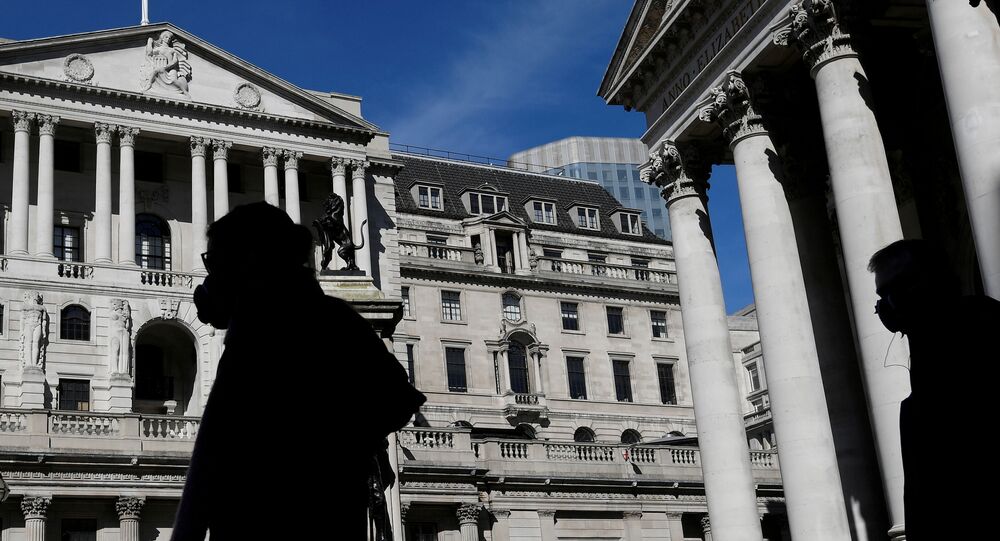 Earlier, a Bank of England report published on 7 May warned that the British economy was heading towards its sharpest recession on record and was expected to shrink 14 percent in 2020, as the COVID-19 pandemic has been "dramatically reducing jobs and incomes in the UK".

The Bank of England’s chief economist has predicted that the country is on course for a “short, V-shaped recovery” in the wake of the COVID-19 pandemic, reported The Telegraph.

In an online talk organised by the Confederation of British Industry, Andy Haldane suggests early signs of consumer spending surging more than anticipated, bolstered by real-time indicators of a "modest recovery" in business confidence.

According to Haldane, if surveys are anything to go by, they are forecasting a “shade better” scenario than the one offered by the Bank earlier, when it published its analysis of the fallout from the pandemic for the UK economy in 2020.

© REUTERS / John Sibley
A cyclist is seen near the Bank of England as the spread of the coronavirus disease (COVID-19) continues, London, Britain, April 14, 2020.

“The reason it was atypically sharp and severe on the downswing are the same reasons we would expect it to be atypically strong on the upswing, as and when we see the opening of the economy. It’s perhaps still a V but it's a relatively lopsided V… The risks to that probably … lie to the downside rather than the up and as I say, a rather more protracted recovery even than the one that I have mentioned,” said Haldane at the CBI webinar on Tuesday.

Responding to concerns generated last week, when Bank of England Governor Andrew Bailey paved the way for negative interest rates, telling MPs that it would be “foolish” to rule out an emergency cutting of borrowing costs to below zero, Haldane downplayed the prospects.

According to Haldane, the key factors for the Bank to consider while reviewing all tools to help the economy through a deep COVID-19-triggered recession were the consequences of negative interest rates for Britain’s banks and lenders.

This, he said, would “trigger a squeeze on margins”, with the move potentially affecting confidence in the broader economy.

“Those are the aspects that we will look at. To be clear, reviewing and doing are different things, and currently we are in the review phase and have not reached a view remotely yet on the doing.”

“The UK looks set to see a frustratingly slow recovery, given the likely slower pace of opening up the economy relative to other countries which have seen fewer COVID-19 cases,” he said.

The IHS Markit Purchasing Managers’ Index (PMI) hit a record low in April, with the activity of a large majority of companies continuing to fall in May. However, its composite index measuring activity in the dominant services sector and in manufacturing offered a cautious optimism, rising to 28.9 in the preliminary data for May from 13.8 registered in April’s reading, reported Reuters.

On 7 May in its Monetary Policy Report, the Bank of England warned that the UK economy was facing its sharpest recession on record, according to Office for National Statistics (ONS) data reaching back to 1949. The fallout from the coronavirus pandemic was predicted to result in a 14 percent shrinking of the economy in 2020.

In the first quarter of the year, the experts anticipated a decline by 3 percent, to be followed by an unprecedented 25 per cent drop in the three months to June.

Bank governor Andrew Bailey at the time was quoted by the BBC as not promising any quick scenarios of a return to normality, in the belief that consumers would display caution even after lockdown restrictions are lifted.

© REUTERS / POOL New
Bank of England Governor Andrew Bailey poses for a photograph on the first day of his new role at the Central Bank in London, Britain March 16, 2020

"Not all of the economic activity comes back. There's quite a sharp recovery. But we've also factored that people will be cautious of their own choice. They don't re-engage fully, and so it's really only until next summer that activity comes fully back," said Bailey.

The analysis was based at the time on the assumption that social distancing measures would be gradually phased out between June and September, suggesting a V-shaped recovery in activity in spheres that sustained less long-term damage from the coronavirus epidemic and lockdown measures.

While many experts have cautioned that the forecast was overly optimistic, and the economy had already sustained severe long-term damage, Bailey insisted any permanent scarring from the pandemic would be "relatively small".

The BBC quoted the Bank’s Governor as saying the economy was likely to recover "much more rapidly than the pull back from the global financial crisis”.