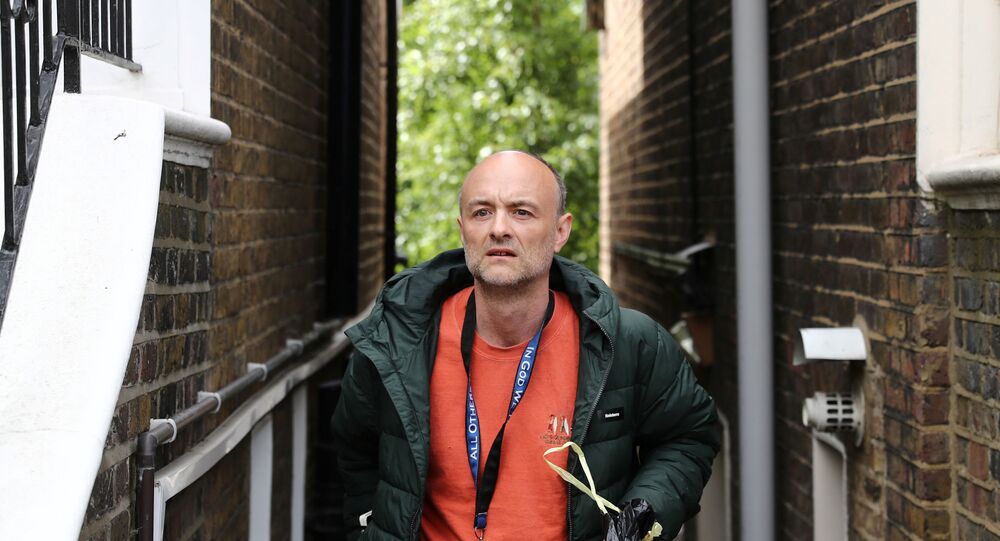 While some of the morning papers directly focused on Dominic Cummings’ justification of his 220-mile trip with purportedly virus-hit wife and little son from their London home, amidst the stringent lockdown, others came up with "killer questions" they say he still faces over the alleged breach of conduct for top government officials.

The Dominic Cummings controversy, which has so divided both the UK political elite and general public, shows no signs of going away any time soon, as his “no regrets” affirmation dominates the Tuesday front pages of all major British newspapers, the morning after Cummings’ TV appearance.

The Mirror, whose joint investigation with The Guardian broke the “hypocrite aide” story on Friday, sports the mantra “No regrets, no apology” as its main headline, going on to depict Cummings as “shameless”.

The paper outlines nine “killer questions” it wants him to answer after the press conference, for instance why - before the infamous trip - he returned to No. 10 when he suspected his wife had COVID, contrary to official advice.

Other tabloids, the Daily Mail and the Daily Mirror also use the phrase “no regrets, no apology”, but in reverse order. “No apology, no regrets” splashes the Daily Mail, referring to Cummings’ comments as “rose garden roasting”. “Boris’s defiant svengali refuses to quit” it also says and then puts forth a straightforward question: “So how CAN he survive?”

“‘I don’t regret what I did’: Cummings refuses to quit", says The Guardian’s headline, portraying his TV press conference from the Downing Street rose garden as “extraordinary”. His justification for driving to Durham to self-isolate was so complex, writes The Guardian’s political editor, Heather Stewart, “it might have helped if he had had a whiteboard to sketch it out on”.

Guardian front page, 26 May 2020: ‘I don't regret what I did.’ Cummings refuses to quit pic.twitter.com/yUpjvwTUxO

The Times focused on Boris Johnson’s right-hand man’s excuses for his relocation from London at the height of the stay home rule, sporting: “Cummings: I did not break lockdown rules” and further adding he believed he behaved “reasonably and legally”. Catering to the public outrage, the paper admits Cummings’ account “raised several questions about his behaviour that he did not address”.

Tuesday’s The Times: Cummings: I did not break lockdown rules #TomorrowsPapersToday pic.twitter.com/cph7Odpr5X

It details how Downing Street has tried to “orchestrate a show of support” for the PM’s adviser, but stressing that some senior ministers are angry: “My jaw continues to drop. He’s saying he’s so much more important than us plebs", it anonymously quotes one as raging.

The Times also reports that “in a tightly controlled subsequent press conference” Johnson denied that Cummings’ interpretation of the healthcare guidelines undermined public health. The newspaper continued on, noting that the prime minister admitted his support “wasn’t unconditional” however, saying that public opinion could “harden against the aide in the days to come".

The Telegraph front page, meanwhile, features a large picture of Cummings, accompanied by just a tiny headline: “I don’t regret what I did”. It opted to save its splash for “High street to reopen as UK edges back to normality” printed in bigger letters. In the Cummings story, the newspaper quotes from Cummings’ appearance and the concessions he attempted to make: “I believe I made the right judgment but I can understand that others may disagree with that", adding that he knew British people “hate the idea of unfairness”.

The Express chose to divert attention to the hitherto biggest issue - the staged reopening of the economy in the wake of the healthcare crisis. It emphasises the hope of businesses reopening with “Hurrah! Shops to open doors soon”, while reserving some space for Cummings as well: “I’ve no regrets: Cummings faces down his critics", the paper sports on its front page.

The Sun likewise gives priority to the “Open for business’ story, allotting Cummings’ justification the top right hand corner: “Cummings out fighting: I did what was right for my family and my country”, it cites hims as affirming.

The Metro meanwhile plays upon Johnson’s comments regarding the reopening plans - “stay alert”, coming up with the “stay elite” message, dwelling on the alleged inequity underlying the Cummings debate.

Dominic Cummings has been in hot water for the past few days, since it emerged he could have breached the nationwide strict stay home rules, which he is understood to have helped craft at the outset of the pandemic. He was reported to have travelled at least twice to his parents' home in Durham, about 220 miles northeast of London, including a day after Downing Street confirmed he was self-isolating with alleged COVID symptoms. What has since caused a separate outcry is media reports that the 48-year-old official didn't stay indoors while in Durham either.

On Monday, speaking from the Downing Street backyard, Cummings defended his March trip to Durham during the lockdown, saying that London could provide no reasonable childcare options if he and his wife fell seriously ill, and remarking that his wife had already showed symptoms by that time.

Defending Cummings, Boris Johnson earlier said he was not prepared to throw his most trusted aide "to the dogs", arguing the guidelines reserved space for considerations about kids' and other family members' health.