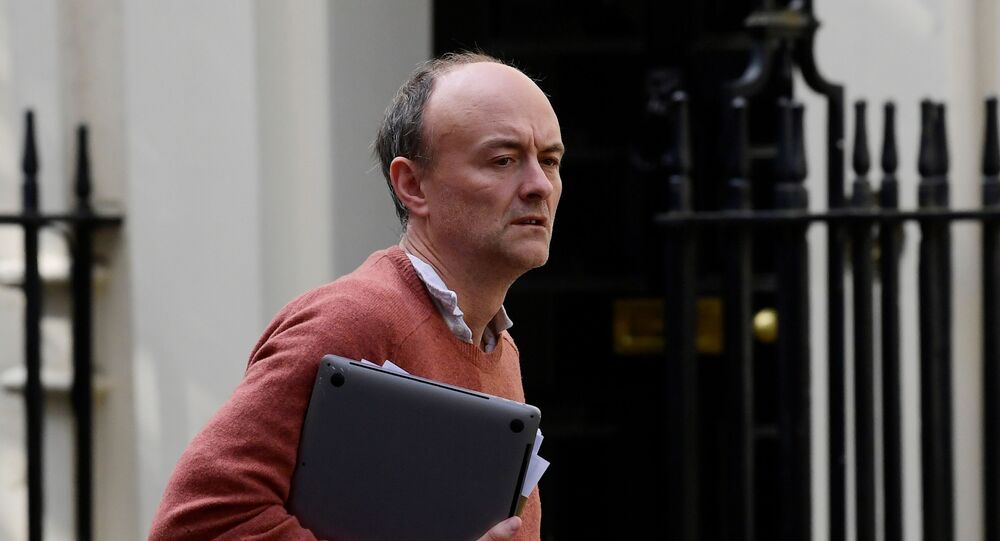 After Boris Johnson threw his weight behind his right-hand man, causing many to rage, far more politicians have since entered the debate, with calls for more thorough checks in the alleged breach of the coronavirus measures, which Cummings was himself behind, continuing to come in.

Steve White, the acting police, crime, and victims’ commissioner for Durham, has asked the force to look into all the allegations against Boris Johnson’s confidante and top aide Dominic Cummings and his time in Durham - at his parents’ place - where he relocated in the midst of the UK’s stringent lockdown, a Guardian report has it, citing White’s statement.

“I have today written to the chief constable, asking her to establish the facts concerning any potential breach of the law or regulations in this matter at any juncture”, White stated, arguing it’s “vital that the force can show it has the interests of the people of County Durham".

The top No 10 aide has of late found himself in hot water after a joint investigation by the Guardian and the Daily Mirror came out claiming that Dominic Cummings had flouted the self-isolation rules he himself helped to craft.

Sources assumed that the 48-year-old Number 10 staffer made a long 220-mile trip to the North East so his parents could take care of his little son if he and his wife, who were both displaying symptoms, were unable to look after him - something the couple reportedly believed was not prohibited under the fresh rules. By that time, Downing Street had confirmed that Cummings was self-isolating at his home after showing virus symptoms.

The police reportedly investigated the matter and found that the individual, whose car had been registered in the driveway to the county, was staying in "part of a house" at a Durham address, and in line with national policing guidance, "officers explained to the family the arrangements around self-isolation guidelines and reiterated the appropriate advice around essential travel”. It was Cummings’ father who reportedly requested that the constables contact his newly arrived son by phone.

Separately, media outlets quoted a neighbour as expressing "shock" at catching a glimpse of Cummings, whom he referred to as "a distinctive figure", on the doorstep of his parents' home with a child he believed was his son on 5 April.

Later, allegations made in the Observer and Sunday Mirror had it that the former Vote Leave protagonist did not stay indoors while in Durham and that he had also made another trip there after returning to London in April.

In particular, the reports dwelled on Cummings being seen dancing in the backyard to Abba’s “Dancing Queen”, as well as walking out with the family at a nearby tourist destination, Barnard Castle. The government denies the latter claim.

Speaking to reporters outside his north London home on Saturday morning, Cummings asserted that he had doubts whether he had done the "right thing" by travelling with his wife and young son to be near relatives when she developed coronavirus symptoms at the end of March.

He said that he was staying in a separate part of the family home when he came down with the virus, adding that he acted “reasonably and legally”.

When grilled whether his trip to Durham "looked good", he responded:

"Who cares about good looks? It's a question of doing the right thing. It's not about what you guys think".

Asked later on Saturday whether he would reconsider his position, he shook his said, saying “obviously not”, and then drew parallels with the debate about right and wrong during the Brexit deadlock.

"You guys are probably all about as right about that as you were about Brexit: do you remember how right you all were about that”, Cummings recalled.

Cummings’ boss, UK PM Boris Johnson, who has over the weekend faced multiple calls for a full-fledged inquiry into whether Cummings violated top officials’ code of conduct, said he would never throw Dominic Cummings "to the dogs”.

He insisted that there was nothing illegal and no hypocrisy in Cummings’ actions, stressing that the guidelines “make it very clear that where you have particular childcare needs that has got to be taken into account”.

The government assured that Cummings went into isolation with COVID-19 symptoms while on that trip, violating no rules.

Grant Shapps, the transport secretary, insisted at a No 10 press conference that Cummings had not broken the rules due to a loophole that allows people to "safeguard" the young and old.

Chancellor Rishi Sunak also weighed in, asserting that taking care of the family is “justifiable and reasonable”, while “trying to score political points over it isn't".

Chancellor of the Duchy of Lancaster Michael Gove tweeted likewise, arguing that caring for one's family "is no crime".

Labour leader Sir Keir Starmer called for a Cabinet Office inquiry, saying Mr Johnson had "failed a huge test" by not sacking Mr Cummings and that he was "treating the British public with contempt”.

The SNP and Liberal Democrats also demanded an investigation, writing to Cabinet Secretary Sir Mark Sedwill, and suggesting that Cummings should go.

Shadow Home Secretary Nick Thomas-Symmonds, meanwhile, wrote to Home Secretary Priti Patel to raise concerns about the implications for policing in the wake of the incident.