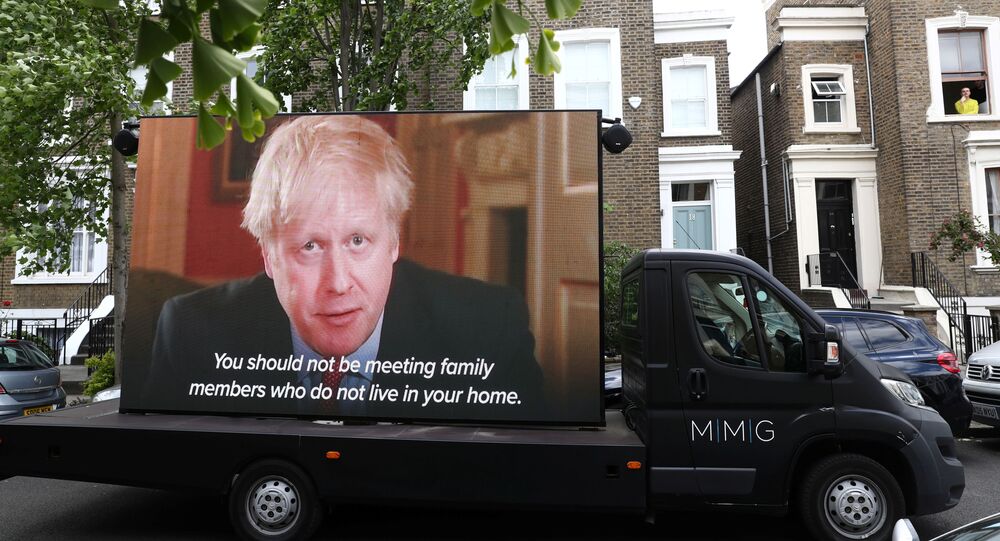 The now-deleted tweet was reportedly posted on Sunday soon after UK Prime Minister Boris Johnson finished his daily Downing Street press conference on the coronavirus (COVID-19) outbreak, during which he defended his political fixer and right-hand man, Dominic Cummings, who is accused of defying the COVID-19 lockdown.

The official Twitter account for the United Kingdom’s Civil Service left netizens in confusion after posting a message that was thought by many to take aim at members of the Downing Street government shortly after a daily COVID-19 briefing headed by UK Prime Minister Boris Johnson.

During the Sunday briefing, Johnson supported senior adviser Cummings, who was documented ignoring the COVID-19 lockdown rules by travelling to Houghall Woods, Durham, twice, on 5 and 19 April. The briefing took place amid rising calls from many in London for Cummings to resign.

"I can tell you today that I’ve had extensive face-to-face conversations with Dominic Cummings and I conclude that in traveling to find the right kind of childcare at the moment when both he and his wife were about to be incapacitated by coronavirus and when he had no alternative I think he followed the instincts of every father and every parent and I do not mark him down for that," Johnson said in a public address on Sunday.

Johnson insisted that his advisor acted "responsibly, legally and with integrity."

The tweet, posted directly at the end of the press conference and featuring the phrase “truth twisters”, prompted an immediate reaction.

“Arrogant and offensive. Can you imagine having to work with these truth twisters?” the deleted tweet read, according to screenshots.

This has just been tweeted from the UK Civil Service account.

This is the craziest political weekend for a long time. pic.twitter.com/u4x0i6plHL

The tweet was liked and retweeted many tens of thousands of times before it was taken down.

It is not clear whether the UK Civil Service Twitter account, which boasts over 261K followers, was hacked before the incident or the message was posted on purpose.

Downing Street said it has launched an investigation into the "unauthorised" message.

An unauthorised tweet was posted on a government channel this evening. The post has been removed and we are investigating the matter.

Shocked Twitter users reacted variously to the mysterious message, with some praising the content and the person behind it.

Raising a glass to whoever hijacked the UK civil service Twitter! 💕🥂🍻 pic.twitter.com/Oocws0M6Ol

A significant number of Twitterians also suggested that the incident as inappropriate, with some calling on the UK Civil Service to “remain impartial”.

"The UK Civil Service must remain impartial. On this basis, should the rogue civil servant who tweeted (using the official @UKCivilService account) to describe the Prime Minister as "arrogant and offensive, truth twister" be fired from his/her position? Yes or No?" a Twitter user asked.

The UK Civil Service must remain impartial. On this basis, should the rogue civil servant who tweeted (using the official @UKCivilService account) to describe the Prime Minister as "arrogant and offensive, truth twister" be fired from his/her position? Yes or No? pic.twitter.com/lW5PgkTksh

Looks like somebody in the UK civil service may have been justifiably unhappy with the current government. 😂 https://t.co/S9x1975hxe

On Friday, a joint investigation by The Guardian and the Daily Mirror reported that Cummings had been identified in Durham, in breach of nationwide coronavirus lockdown regulations. The Mirror noted in another report on Saturday that Cummings, whose wife had tested positive for COVID-19, defied the lockdown restrictions for a second time, taking another trip to Durham.

On Saturday, the prime minster resisted calls from the opposition and others in government to fire Cummings, arguing that the political adviser made the journey to ensure that his young son be properly cared for after his mother tested positive for the disease.

Labour Calls for Inquiry Into Cummings’ Lockdown Trip, Which Was Fully Supported by Johnson