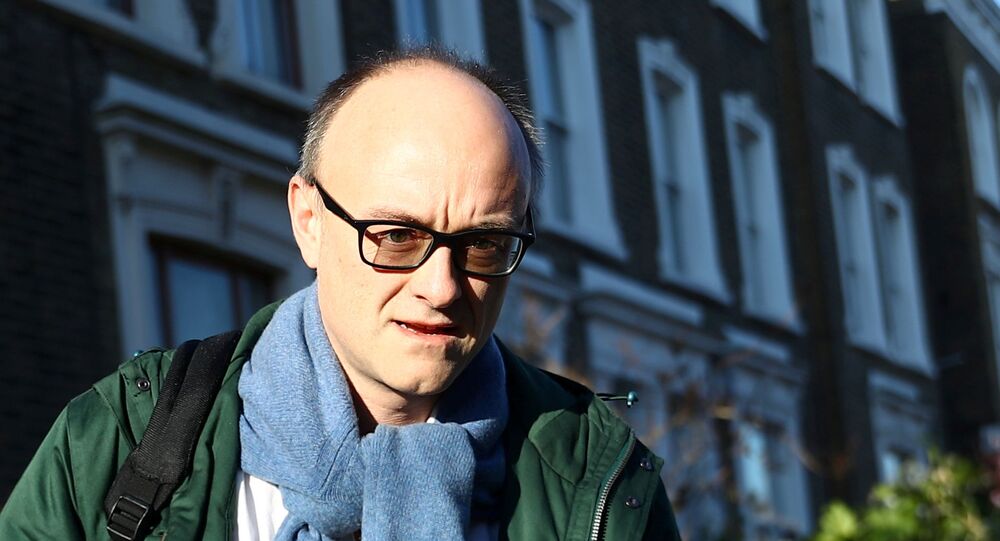 Despite his denials of wrongdoing, Dominic Cummings hasn’t been able to escape dogged allegations over the past few days that he acted improperly by breaching the coronavirus lockdown. Now, it appears those same accusations have followed him to his front door.

A giant mobile screen showing Boris Johnson saying “you must stay at home” has been placed outside of Dominic Cummings’ house amidst increasingly loud calls for the special government adviser to be fired over allegations that he twice breached the coronavirus lockdown.

The screen shows Boris Johnson during a television address to the nation in which he says, “you must stay at home. You should not be meeting family members who do not live in your home.”

Aside from Johnson’s remarks, the screen also shows interviews with members of the British public, who express their apparent frustration and disbelief that Mr Cummings, seen as the prime minister’s closest adviser and right-hand man, would break the government’s own lockdown measures.

“I spent two weeks in hell, basically, trying to look after myself and my daughter. Some of those days I could barely get out of bed to feed her,” says one woman in the video.

“And then I find out he’s [Mr Cummings] broken those rules and I’ve gone through that horrid time, perhaps for no reason,” she adds.

It’s hard not to cry watching it. The unbelievable sacrifices made my members of the public show this government up for the entitled, selfish, cowards they are. pic.twitter.com/LKZ7FIHjLO

Other clips show parents distraught and in tears in hospital because they’re unable to see their sick children. The video also gives reports of family members unable to attend the funerals of loved ones who have been killed by COVID-19.

The campaign group who stationed the screen outside of Mr Cummings’ residence, called Led by Donkeys, also placed another installation on Westminster Bridge Road on Friday, May 22.

Tweeting a photo of the billboard, which reads “stay alert, government incompetence costs lives", the group said that, “when the PM's top adviser is criss-crossing the country with coronavirus, it's definitely time to stay alert.”

​The development comes as pressure continues to mount on Boris Johnson to fire Mr Cummings after he allegedly broke lockdown measures on two occasions to drive 260 miles from London to visit his parents in the northeastern English county of Durham. It has been widely reported that Cummings made the first trip at a time when he believed he and his wife were infected with coronavirus.

The Mirror revealed that after his first trip to Durham, Mr Cummings returned to work at No. 10 Downing Street on April 14, but was back in Durham again on April 19 when outdoor walkers allegedly spotted him admiring some bluebell flowers.

Despite united calls for Cummings’ firing among the opposition Labour Party, Scottish National Party, Liberal Democrats and even some senior Tory MPs, Boris Johnson has pledged his “full support” to the senior aide and said that he refuses to throw him “to the dogs.” The Mail on Sunday has said that the prime minister, in defending his aide, said that, “it’s not like he was visiting a lover.”

MAIL ON SUNDAY: Boris: It’s not like he was visiting a lover #TomorrowsPapersToday pic.twitter.com/Y13S0gWpkK

The Transport Secretary, Grant Shapps, has said accusations that Mr Cummings “travelled backwards and forwards” are “completely untrue,” and that since returning to London from his first trip on April 14, he has stayed in the capital.

In his own defence, Cummings said to the media that, “I behaved reasonably and legally… it’s a question of doing the right thing, it’s not about what you guys think.”

However, prominent pro-Brexit Conservative MP Steve Baker has said that Cummings must resign.

“Dominic Cummings must go before he does any more harm to the UK, the government, the prime minister, our institutions or the Conservative party,” Baker wrote on The Critic website.

A petition calling for Mr Cummings to be sacked has also been circulated and has so far reached nearly 75,000 signatures.