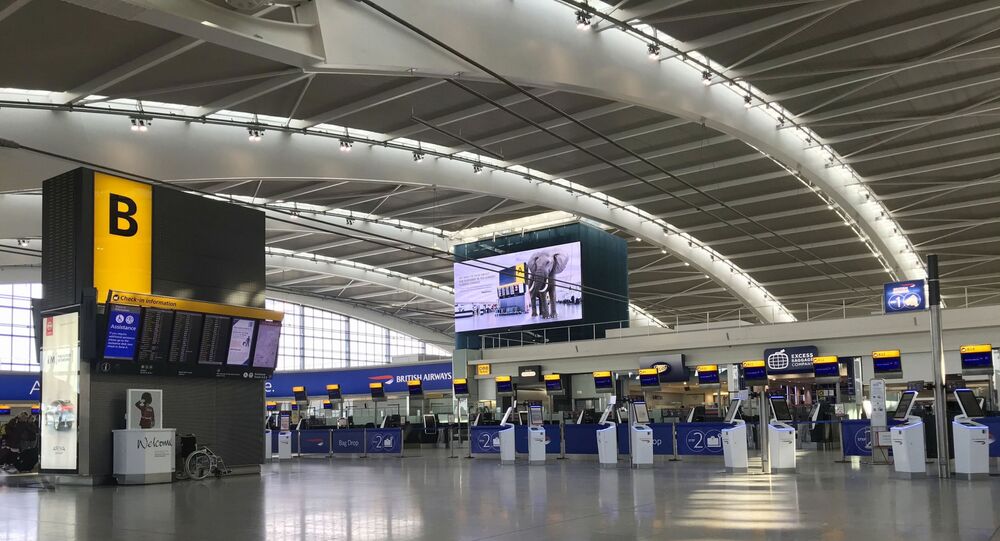 Lack of a travel ban in the UK has presented a stark contrast to the measures adopted in the EU and the US, where borders have been shut to travelers amidst the COVID-19 pandemic. While arriving passengers from affected countries have been requested to self-isolate for 14 days, there are no means of enforcing this.

UK Home Office figures show that only 273 people who arrived in the country in the three months before a COVID-19 lockdown was introduced were formally quarantined, reported The Guardian.

Stephen Doughty, Labour MP and member of the Home Affairs Select Committee, received the information from the government along with additional data that confirmed 18.1 million people had entered the UK in that period of time via air, land and sea from all destinations.

© AFP 2021 / ANDREW MILLIGAN
Staff direct traffic as key workers arrive for a test for the novel coronavirus Covid-19 at a drive-in testing centre at Glasgow Airport on April 29, 2020, as the UK continues in lockdown to help curb the spread of the coronavirus.

It is also suggested that according to Home Office estimates tens of thousands of potentially infected individuals from coronavirus-affected countries could have crossed the UK borders during that time.

Government-supported isolation facilities had accommodated passengers from three flights from China’s city of Wuhan, the source of the respiratory disease outbreak in December 2019, and a flight from Tokyo, Japan, delivering passengers from the ill-fated coronavirus-stricken Diamond Princess cruise ship, between 1 January and 22 March.

“The admission that just four flights from two locations, barely a few hundred individuals – out of literally millions of arrivals – were formally quarantined while the pandemic was already raging in a series of locations beggars belief… On what scientific basis were a handful of flights from Wuhan and one from a Tokyo singled out for extreme attention? But not a single flight from Northern Italy, Spain or the US? questions Stephen Doughty.

The politician added that many of the cited arrivals subsequently travelled across the UK possibly with little adherence to social distancing protocols.

Another disturbing incident cited was the Champions League football match in Liverpool, attended by some 52,000 people, including 3,000 fans from Madrid, at a time when Spain was already in partial lockdown.

While daily arrivals in the UK have dropped to under 10,000 compared to around 300,000 in the months before the pandemic, crisis struck Europe the government continues to allow people to cross the border without screening or enforced quarantine.

“Arrivals continue to this day – with no formal quarantine requirements. It is simply staggering. Who made these decisions? And on what basis?” concluded Doughty.

According to data cited by the outlet, on 31 January, 83 passengers entered Britain on an evacuation flight from Wuhan and were dropped off at an isolation facility in Merseyside.

11 passengers were taken to the same site after arriving on 2 February via a French-organised evacuation flight from Wuhan.

A final evacuation flight brought 147 people from Wuhan on 9 February, with a facility in Milton Keynes used to quarantine them, while on 22 February, 32 passengers were evacuated from Tokyo and taken to the Merseyside site.

UK Home Secretary Priti Patel has defended the government’s continued refusal to enforce screening or quarantine on UK borders, claiming the decisions were made on recommendations from the scientific advisory group for emergencies (SAGE).

“It was incredible that the home secretary couldn’t answer clear questions from the select committee regarding controls on flights from areas suffering from extensive coronavirus outbreaks. It appears crucial opportunities were missed, meaning significant numbers of people may have been entering the country with coronavirus,” said Nick Thomas-Symonds, the shadow home secretary.

The politician added that while new probes need to be carried out into how and why certain decisions were taken, it was “vital past mistakes are learned from to help shape policy as we move to the next stages of managing this crisis”.

There has been no official comment on the report from the UK Home Office.

In late March Downing Street announced it would not seek to shut Britain's borders amid the pandemic, despite the measure being taken by other nations.

Although Home Secretary Priti Patel was cited by The Daily Telegraph as insisting that flights from virus hotspots should not be allowed while the UK is on lockdown, Boris Johnson’s spokesman said there were “no plans to do that”.

“The level of inward travel into the UK has fallen greatly since the outbreak of the virus and we have seen many transport providers reduce their services. The chief medical officer has said that there is no evidence that closing borders would have an effect on the spread of infection.”