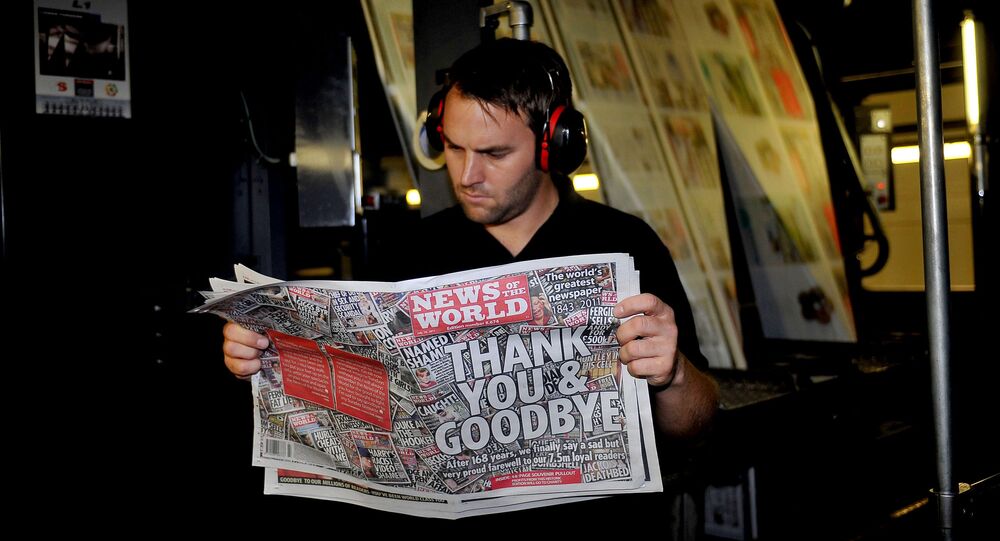 In the 1970s more than 14 million daily newspapers were sold in Britain but that fell to eight million last year and is still plummeting. Millennials have not got into the habit of buying newspapers and the coronavirus crisis could be the final straw for many proprietors.

The General Secretary of Britain’s National Union of Journalists, Michelle Stanistreet, has urged the government to increase the digital services tax from two to six percent and spend it on saving media outlets and revolutionising the industry.

Ms Stanistreet has launched a News Recovery Plan amid fears the financial meltdown caused by the coronavirus crisis will be used as an excuse by newspaper proprietors to close down their print operations and switch to online-only journalism.

So many tweets today about "buy a newspaper, keep journalism alive" but why should we when it's still largely this ridiculous arrant balls. UK Papers have long abused the privilege of appearing decent and trusted. The cynical tabloid game is finished. Be gone. It's over. pic.twitter.com/VjoYbuQoeL

The Independent newspaper was the first to switch to online only journalism back in 2016 and last month the London freesheet City AM stopped producing a print edition.

An NUJ source said: “There are general trends which have been accelerated by the coronavirus pandemic.”

I have a subscription to a newspaper. I also buy hard copies when I go to the shops. So much of what's on the shelves is only fit to line a litter tray. Journalists cannot insist we save their industry without first improving their product. They're not entitled to our trade.

​Newspaper sales in the UK have been declining since the 1980s and some titles, such as the Evening Standard, have dropped their cover prices in order to compete with freesheets like the Metro, which is sold to commuters in many UK cities.

“It’s only £1 a day” nobody has a job and there’s a pandemic on please sound more tone deaf you freaks.

“Wah wah newspapers are dying”. Well you’ve been playing with matches for long enough next to petrol I’m not going to save you from your pyromania

​In 1956 the Daily Mirror sold almost five million copies a day and the Daily Express another four million. The Sun was launched in the mid-1960s and by 1980 it had overtaken the Mirror, which had seen its sales dip.

When the BBC launched its news website in 1997 people started to get their news free from the internet and as the Daily Mail, Guardian and others went online, newspapers sales started to fall.

​Few people born after 1980 saw the point of spending £1 or more on a daily newspaper when they could get more up-to-date news on the internet or, eventually, on their smartphones.

Opinion is divided on social media about whether newspapers deserve public support, with many Twitter and Facebook users saying the mainstream media has brought disaster upon itself after years of scaremongering, invasion of privacy and celebrity tittle-tattle.

Journalism in the UK has never fully recovered from the damage to its reputation of the phone-hacking scandal, which led to the closure of the News of the World in 2011.

Ms Stanistreet told Sputnik: "It is too soon to say how the lockdown will affect the number of companies that may switch to digital in the long-term and how the consumer market or level of demand may change. Whatever the platform, what matters is that life-saving news and information can be created and disseminated, and journalists can properly fulfill their responsibilities to scrutinise and hold power to account. Fulfilling that vital function in a democracy requires adequate staffing and freelance resources.​"

​Newspaper sales have been plummeting since 2015 and media companies have started reporting big losses - the Evening Standard reported an £11.9 million loss last year and The Sun reported a record loss of £68 million in February 2020.

Earlier this month the Jewish Chronicle went into voluntary liquidation.

The coronavirus crisis has been devastating for online and print media with large chunks of advertising - property, cars, holidays and other luxuries - evaporating and already 2,000 journalists have been laid off.

​The media analyst Douglas McCabe believes 5,000 print journalists could lose their jobs by the end of the year.

Ms Stanistreet, who has been having weekly meetings with the Secretary of State for Culture, Media and Sport Oliver Dowden, said on Monday, 20 April: "It was imperative that the union stepped up to launch a News Recovery Plan for the UK and Ireland, to sustain the press and media through the Covid-19 crisis but also to reinvigorate the industry into a reimagined future."

People wishing for death of newspapers while relishing reports from newspapers. You dont know what you've got till its gone ...

​She wants the government to triple the digital services tax on big tech corporations like Facebook and Amazon and use this money to give tax credits and interest-free loans to support journalists’ jobs.

As for the long-term, Ms Stanistreet said: "There must be independent sustainable funding of public service broadcasting that protects its universality and prevents government interference, a nationwide media literacy strategy to tackle disinformation and fake news and, importantly, reform of media ownership rules, with a strengthened public interest test."

One thing that’s different between this pandemic & other major disasters of recent years: the abstractness of the death toll. Local newspapers have obituaries, but I don’t see places like @CNN even providing names. It’s all just numbers & they’re too big for us to process. https://t.co/iEB7iw28ec

​The UK government, focused on tackling the crisis in the NHS and trying to keep the economy from collapsing completely, has not commented on Ms Stanistreet’s proposals.

There is no future for the mass revival of local journalism across America that doesn't include public subsidies. If the government doesn't step in, only prestige coastal newspapers will be left. https://t.co/XL0VU6xmw3

​Earlier this week Mr Dowden wrote an open letter, published in The Times, in which he said the UK press was "grappling with arguably the biggest existential crisis in its history" and urged people to buy daily newspapers.

He also called on some of Britain’s biggest brands - including Tesco and Sky - to remove ad-blockers which prevent their adverts appearing next to articles about the coronavirus.

Mr Dowden wrote: "These are exceptional circumstances and the wide-scale blocking of advertising appearing next to Covid-19 related stories cannot be right at a time when there is a clear public interest in people having access to reliable, trusted news content."