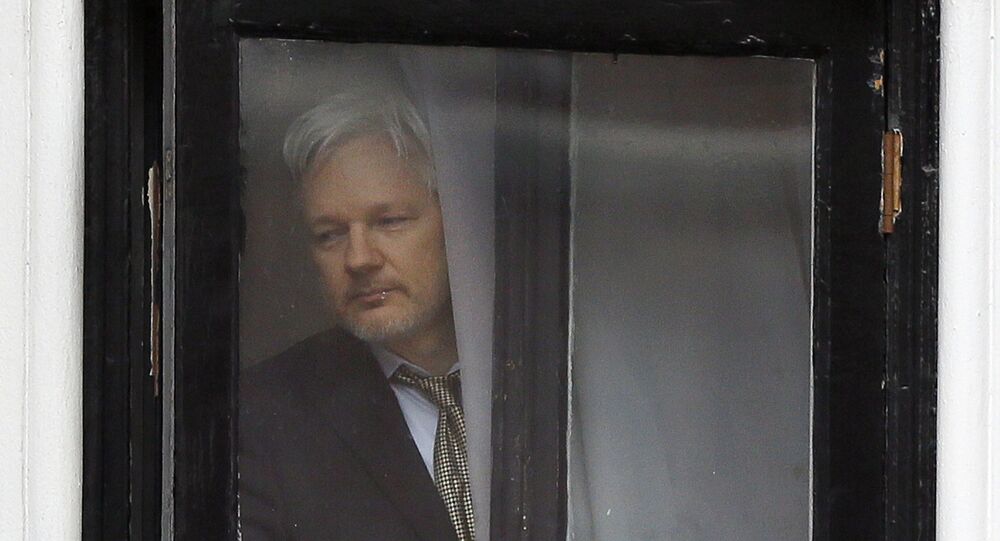 The video cameras and recording devices were reportedly installed by a security firm that reported back to the US, which sought to prosecute the whistleblower over his release of secret Afghan and Iraqi war logs as well as State Department cables.

Sputnik obtained several videos shot by cameras installed in the Ecuadorian embassy in London by the Spanish security firm Undercover Global (UG) during Julian Assange's stay there. The footage shows the scale of the surveillance used against the WikiLeaks' founder, the results of which, according to the accusations filed by the whistleblower's lawyers, were reported by the UG to the US and the Ecuadorian secret service SENAIN.

One of the videos shows Julian Assange talking to the former Ecuadorian consul in London, Fidel Narvaez, in an embassy corridor. While the cameras recorded the footage, hidden adhesive microphones recorded conversations of Assange and the embassy's employees.

One such microphone was installed by the UG at the base of a fire extinguisher in the meeting room to counteract the white noise generator that Assange often used to ensure privacy. Another microphone was hidden in the ladies' room, also utilised by the whistleblower for private talks to avoid being overheard.

The wiretapping of his talks revealed to the UG Assange's plans to leave the UK using a diplomatic passport, according to one of his lawyers, Aitor Martinez. The security firm allegedly passed the information to the US, which issued an international arrest warrant for Assange soon after, thus botching his plans.

All visitors to Assange started undergoing thorough screenings at the embassy's checkpoints managed by the UG. One of the videos showed how the whistleblower's physician, Dr. Tim Ladbrooke, handed over all of his possessions to a security guard at one such checkpoint.

Assange's lawyers, Aitor Martinez and Gareth Peirce, underwent similar procedures, another footage shows. They filled a suit against the UG for violating the whistleblower's rights and for recording confidential lawyer-client negotiations by wiretapping the embassy's rooms and corridors.

Diapers and WikiLeaks: The Unknown Romance and Children of Julian Assange