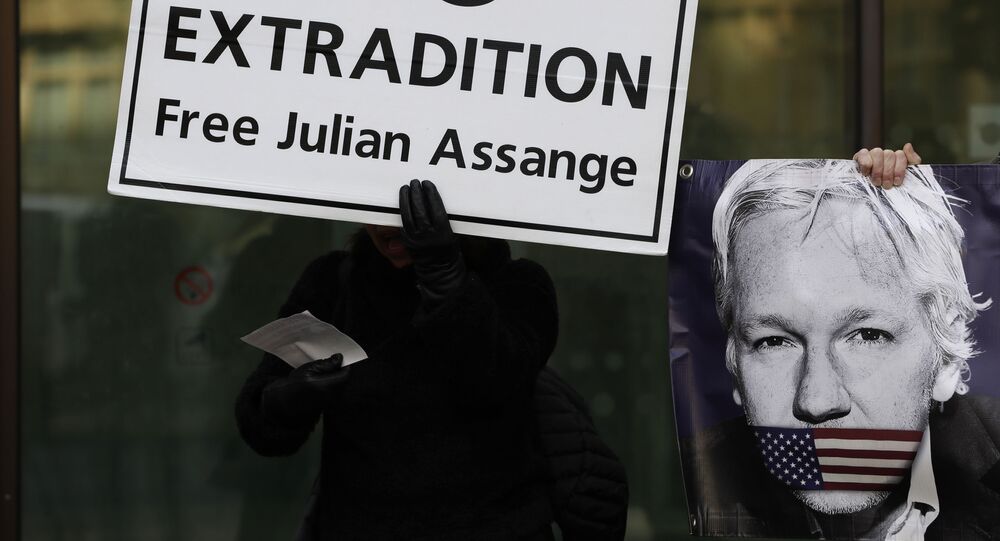 MOSCOW (Sputnik) - WikiLeaks editor-in-chief Kristinn Hrafnsson said on Saturday that the authorities of the prison where whistleblower Julian Assange is kept were not providing accurate information about how COVID-19 was being handled in the facility.

Exactly a year ago, Assange was stripped of asylum in the Ecuadorian embassy in London and arrested by the UK police over breaching his bail. He is now on remand in the Belmarsh high-security prison pending extradition to the United States to potentially face a 17- year long sentence over charges of espionage.

"We are not getting truthful and accurate information on what is going on in [the Belmarsh prison]. We know about two deaths — only one has been acknowledged, but we know of two," Hrafnsson said during an online video conferencing event timed to the anniversary of Assange’s removal from the embassy.

According to the WikiLeaks editor-in-chief, there are in fact many more cases in the prison as inmates "do not dare to cough" or report any other symptoms of common cold and flu out of fear to be forced into quarantine alongside individuals who have tested positive for COVID-19. Hrafnsson also said that inmates do not get tested unless they fall "gravely ill."

According to Deepa Govindarajan Driver, lecturer in Governance, Regulation and Risk at the University of Reading who moderated the event, Assange’s "chronic lung conditions since 2012" and "mental health conditions related to depression" make him extra vulnerable to COVID-19.

In 2010, WikiLeaks released the largest leak of classified documents in history. More than 700,000 files and diplomatic cables exposing atrocities committed by US troops during military operations in Afghanistan and Iraq were published in the period from July to October. The United States claimed that Assange got the documents by conspiring with former US army intelligence analyst Chelsea Manning and hacking a classified government computer — an allegation Assange denied.

Judge Decides Identity of Julian Assange's Partner Can Be Revealed, But His Defence Will Appeal