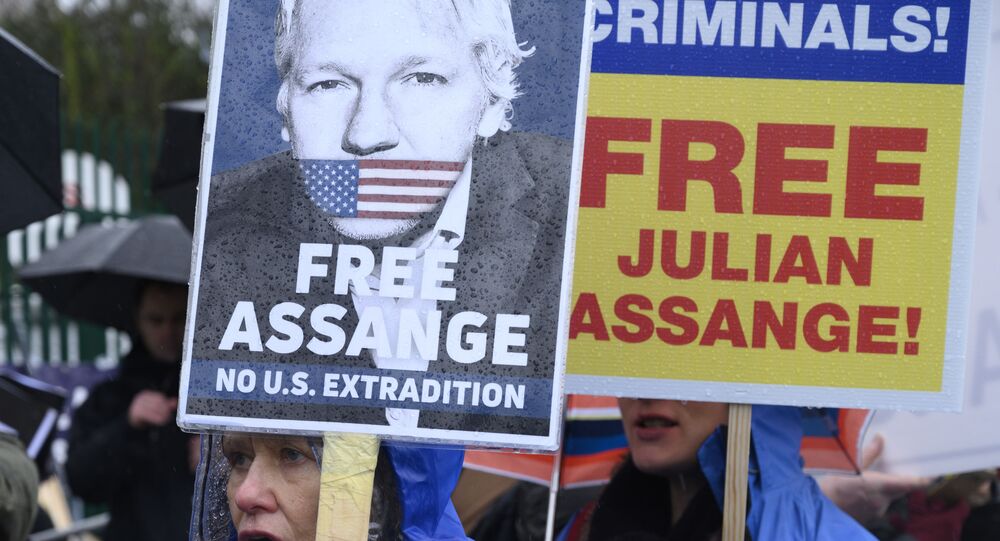 MOSCOW (Sputnik) - Whistleblowing website WikiLeaks reiterated its concerns about the health of its founder, Julian Assange, on Tuesday after the high-security Belmarsh prison, where he is being held, confirmed its first COVID-19 death.

WikiLeaks warned about the situation at the facility, where its founder Julian Assange is now imprisoned.

"Two weeks ago: Judge refused bail to #JulianAssange saying that he, and all other prisoners, would be safe in Belmarsh Prison. Today the BBC is reporting first death in Belmarsh, with many other prisoners infected", the group wrote on Twitter.

Earlier in the day, Assange appeared before the court via a video link for a directions hearing.

© AFP 2021 / DANIEL LEAL-OLIVAS
A member of staff wearing PPE of gloves, an apron and a face mask as a precautionary measure against COVID-19, prepares to disinfect an ambulance after it arrived with a patient at St Thomas' Hospital in north London, on April 1, 2020, as life in Britain continues during the nationwide lockdown to combat the novel coronavirus pandemic.

The BBC broadcaster reported earlier in the day, citing internal documents, that a total of nine inmates in prisons across the country had died after contracting the virus. Among the fatalities was a Belmarsh prisoner.