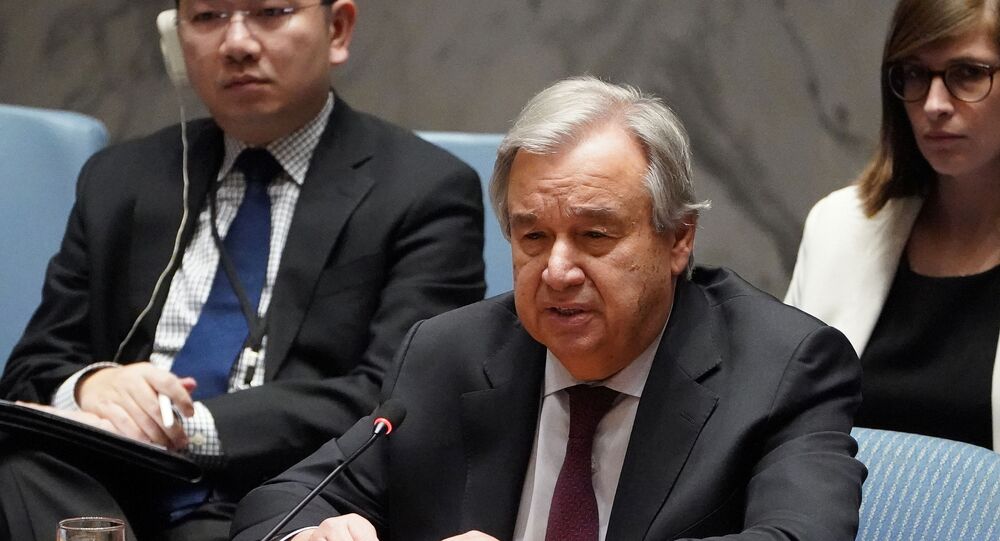 The long-term impact of the coronavirus is being challenged as business activity has been forced to grind despite emergency stimulus packages. The United Nations and WHO are stressing the importance of international cooperation in order to combat the outbreak.

The coronavirus pandemic presents the worst danger to global peace that the world has seen since the end of the Second World War, UN Secretary-General Antonio Guterres said on Wednesday.

The disease "represents a threat to everybody in the world and... an economic impact that will bring a recession that probably has no parallel in the recent past," he said while attending the launch of a UN report on the socioeconomic impacts of the virus.

"The combination of the two facts and the risk that it contributes to enhanced instability, enhanced unrest, and enhanced conflict are things that make us believe that this is the most challenging crisis we have faced since the Second World War".

The report calls the disease “a global health crisis unlike any in the 75-year history of the United Nations, one that is killing people, spreading human suffering, and upending people’s lives”.

“But this is much more than a health crisis. It is a human crisis. The coronavirus disease is attacking societies at their core", the report adds.

Mr Guterres called for a stronger and more unified global response to curbing the outbreak. Describing the fight as an “unprecedented test” which has left countries “in turmoil” and their economies “in a nose-dive”.

It will only be possible “if everybody comes together and if we forget political games and understand that it is humankind that is at stake”, he explained.

The secretary-general slammed countries ignoring the World Health Organisation (WHO) guidelines and choosing to go their “own way” in attempting to tackle the spread and called for "large-scale, coordinated and comprehensive” action.

He said that the response must include the scaling up of "health capacity for testing, tracing, quarantine and treatment, while keeping first responders safe, combined with measures to restrict movement and contact”.

The UK has received criticism from a former WHO director for not conducting nationwide testing, as well as concerns being raised about countries such as Sweden not implementing sufficient social distancing measures.

Mr Guterres statement came during a live-streamed press briefing just before it was confirmed that the number of Covid-19 cases worldwide had reached 860,000, with more than 42,000 dying with the virus.

China has been issuing aid packages of medical equipment as well as sending medical experts to coronavirus-stricken countries such as Spain and Italy.

The coronavirus pandemic has been confirmed to have taken 30,000 lives in Europe alone, a report revealed on Wednesday.

With economic activity the world over grinding to a halt and growth rates indicating a rapid fall into recession, social stability appears to be under threat, with protests over lockdown policies in Tunisia and Hungary passing emergency powers legislation..