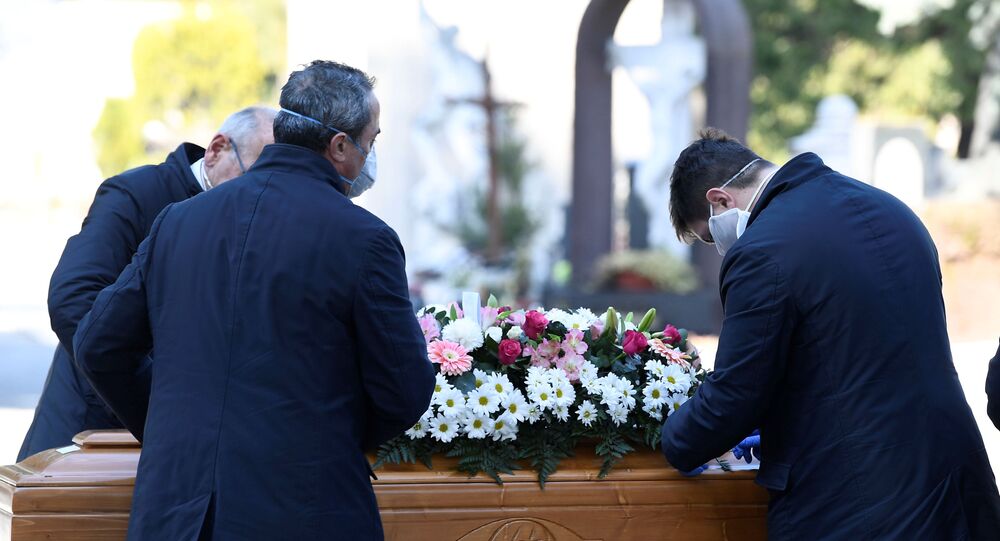 As ‘Heartbreaking’ Social Distancing Rules Begin to Bite, Should Funerals be Banned in UK?

Italy has banned funerals during the coronavirus outbreak. The British government has imposed restrictions on the number of people attending funerals but is it putting an unbearable stress on grieving families?

Good Funeral Guide, a UK consumer organisation, has called on the government to ban funerals during the coronavirus outbreak as tight restrictions on the cermonies were brought in by the Prime Minister, Boris Johnson, on 23 March.

The government said only "immediate family" should attend funerals - and social distancing must be in place - but local authorities have interpreted the guidelines differently with many allowing 10 guests but some cities, such as Sheffield, reducing the number to five.

Fran Hall, CEO of the Good Funeral Guide, wrote on their website: "The decision to exempt funerals from the current ban on social gatherings was undoubtedly made for compassionate reasons, but the current lack of clear instruction and direction is leading to anguish and suffering beyond imagination.”

​She said mourners were “risking their health and even their lives” by attending funerals and yet the number of guests had been pared down so much that services were now “almost unrecognisable.”

Ms Hall said: “Almost everything we are familiar with in a funeral ceremony has been stripped away by the attempt to slow the spread of Covid-19. What we are left with is worse than nothing.”

My dad has passed away.
I wasn't able to be with him at the end because of Covid-19
The funeral will just be me and my husband and I can't even buy flowers
So I wrote this because it's the only way I can pay tribute to him and say goodbye. RIP Dadhttps://t.co/xqURRCEz8j

​Former Labour MP Joe Ashton, 86, died at the weekend from natural causes and his daughter Lucy, a journalist with the Sheffield Star newspaper, said it would only be her and her husband at the funeral, although a memorial service is planned for later in the year.

Jo Brewer, who conducts funeral in the city of Plymouth in the south-west of England, said the restrictions were "heartbreaking."

She told the BBC: "They're desperate to comfort one another and can't. But they're sitting two metres apart.”

​Unlike weddings and baptisms, funerals have still been allowed to go ahead but with immediate family only.

More than 1,200 people have died of coronavirus in the UK and a makeshift morgue which could accommodate up to 12,000 bodies is being built at Birmingham Airport.

The nature of coronavirus means the virus dies with the host but traces may remain on the body and morgue attendants and undertakers have to use gloves to protect themselves from infection when embalming and preparing the body for burial or cremation.

The National Association of Funeral Directors (NAFD) said the government's guidelines were open to interpretation because "immediate family" could mean something different, depending on cultures and families.

​NAFD spokeswoman Deborah Smith said infection control guidelines were already in place which undertakers use when handling the bodies of people who have died from an infectious disease.

Ms Smith said: "Witnessing the funeral of a loved one plays an important role in helping bereaved families move through the grieving process and not being able to attend can have an impact on long-term health and wellbeing. Unlike any other life event, a funeral can't be deferred and there is no opportunity to 'do it again'. Therefore, being able to be there in person, even if as a much smaller group that they would have wanted, remains an important choice that families must be free to make for as long as possible."

​She added: "It may be that the family themselves decide that they do not wish to attend, but it is not for us to deny families that opportunity if there is no reason to do so within the Government’s guidelines. While an outright ban might seem like a more straightforward solution, there is real risk of this having serious unintended consequences for bereaved families. The important thing is to get the balance right."