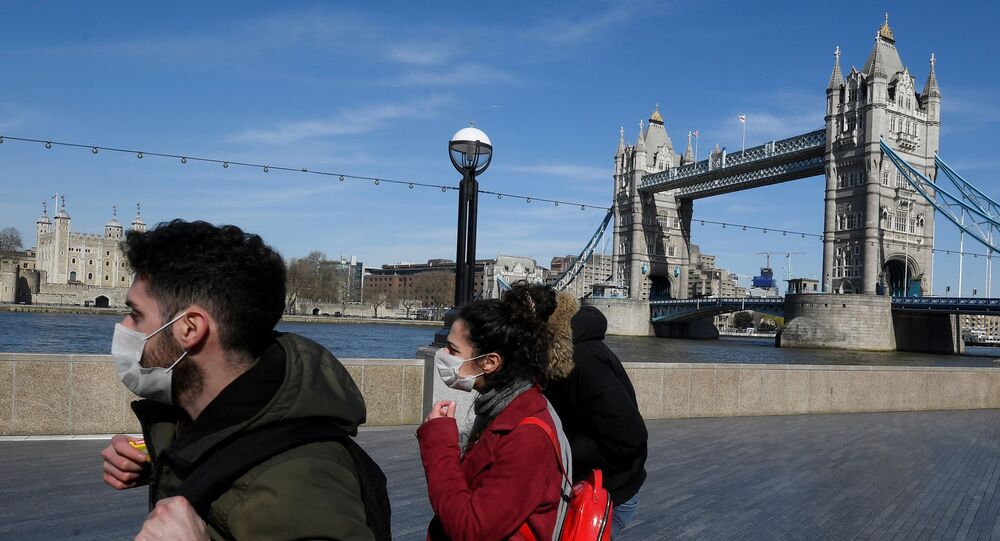 The move comes shortly after UK Prime Minister Boris Johnson confirmed on Friday that he tested positive for the coronavirus, and despite mild symptoms, will self-quarantine in Downing Street.

The UK's credit rating has been downgraded by Fitch Ratings, which cited a significant weakening of the country's public finances due to the raging coronavirus and continued uncertainty over post-Brexit trade relations between London and Brussels.

According to the Fitch forecast, the country's economic output could fall nearly 4 percent this year due to the pandemic, which has already infected 14,000 people there. The agency, however, stressed that its analysts had been concerned about the UK's "fiscal loosening stance" even before the Boris Johnson government unveiled its fiscal plan to combat the crisis.

“The downgrade reflects a significant weakening of the UK's public finances caused by the impact of the COVID-19 outbreak and a fiscal loosening stance that was instigated before the scale of the crisis became apparent", the rating agency said.

On Friday, UK Chancellor of the Exchequer Rishi Sunak announced £60 billion in extra public spending to fight the crisis. On 11 March, he unveiled the budget and promised £30 billion in financial stimulus to help businesses and the NHS cope with the coronavirus.

Boris Johnson also promised to provide support to UK businesses last week amid questions by industrial groups about whether the government was doing enough to help out amid the outbreak.

Sunak later announced a package of measures that will include £330 billion in guarantees to businesses, including a state lending facility to support liquidity among larger firms. The measures are the equivalent of 15 percent of the UK's GDP, and will be made available to "any business that needs access to cash", according to Sunak.

According to Fitch's estimates, Britain's Coronavirus Job Retention scheme, a three-month programme to back employees affected by the disease, will cost about 1.3 percent of GDP.

“The UK's public finances were already set to weaken following the stimulus measures announced in the budget on 11 March, and they are now set to deteriorate more rapidly", Fitch stated. The fiscal impact “will depend on the severity and length of the lockdown and the sustainability of any progress in coronavirus containment”.

The decision came hours after Boris Johnson and Health Secretary Matt Hancock announced that they have tested positive for coronavirus. On the evening of 24 March 2020 Johnson declared the UK to be on "lockdown" as part of the battle against COVID-19. As of Friday, the number of confirmed coronavirus cases of in the UK has surpassed 14,500, while the death toll rose to 759.

Due to the pandemic, planned negotiations between the UK and the EU have been abandoned after it became clear during a European Commission briefing that video-conferencing would not be suitable for the talks, the Guardian reported on Friday.

After formally leaving the European Union on 31 January, the UK and EU have until the end of an eleven-month transition period to conclude a range of agreements on the future relationship between London and Brussels, the most pressing of which is a wide-ranging free trade deal.

At a press conference on 18 March, UK Prime Minister Boris Johnson said that an extension to the transition period was not being considered despite the disruption caused by the ongoing COVID-19 outbreak.