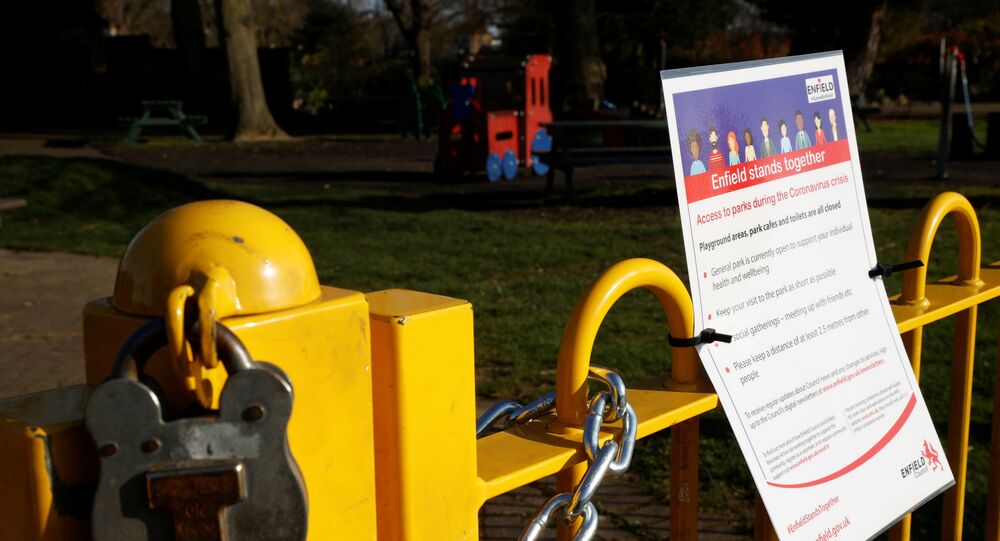 Under the new provisions, the Prime Minister and other authorities have put into effect a sweeping list of restrictive protocols, with Brits being told to leave their homes under "very limited purposes" or face penalties for failing to comply such as steep fines or dispersing social gatherings.

The UK government announced new procedures on Monday evening for a national lockdown, with police enforcing strict measures to contain the coronavirus pandemic after it made landfall in March.

The rules have taken immediate effect, UK prime minister Boris Johnson announced in a briefing at the time, adding that reviews will be conducted after three weeks on whether to relax or continue protocols.

The news comes as figures from the Department for Health and Social Care and Public Health England revealed that, as of Tuesday morning, over 8,000 people tested positive for the coronavirus, resulting in 422 deaths.

Sputnik takes a look at the full list of Government provisions affecting everyday life across the country.

People can only leave the house to shop for basic necessities like food and medicine "as infrequent as possible", the government said. Those exercising can do so using "one form" a day such as running, walking or cycling, either alone or with members of the same household.

People with medical needs or carers to vulnerable people can leave when needed. Professionals defined as 'key workers' under government definitions can commute to work, but only when it "absolutely cannot be done from home".

Overall, the government has advised people to 'minimise' time spent outdoors and to remain two metres apart from those outside the same household. Minors can move between parents homes, and most vulnerable people such as the elderly, those with preexisting conditions and serious illnesses, including people self-isolating, are recommended to stay at home.

Key workers and parents of vulnerable children can leave the house for transport to relevant childcare providers.

As per the UK Government's social distancing measures, certain shops labelled 'non-essential' have been forced to close, including pub, cinemas, theatres, retail shops with non-essential goods - clothing and electronics, beauty, etc. - as well as public markets outside of food markets, among others.

Leisure facilities such as arcades, bowling allies and others have been closed, and communal places within parks, including playgrounds, outdoor gyms and sports courts (cricket, football, basketball, etc.) are off limits.

Churches, mosques, synagogues and other places of worship are close, except for funerals with immediate families in attendance. Libraries as well as community and youth centres have closed until further notice.

Accommodation facilities such as hotels, bed and breakfasts, caravan parks and boarding houses are closed, with exceptions for key workers and emergency accommodation providers for vulnerable groups like the homeless.

Public gatherings of more than two people have been banned, the Government announced, with exceptions for those living in the same household and essential meetings for work purposes, granted workers minimise in-person meetings and gatherings.

Essential work that cannot be done from home, such as those caring for the elderly, doctor, nurses, key workers and construction workers, can commute to and from their place of work, the Government announced, but added that facilities not listed as 'non-essential' and 'public spaces' are not required to close as was "important for business to carry on".

Employers have been advised to arrange work-from-home conditions with "suitable IT and equipment" provided, according to government guidelines. Only those that are well and not self-isolating can travel to work, consistent with advice from the British chief medical officer, Chris Whitty.

Employers should enforce two-metre social distancing guidelines for all employees when possible, as well as workers washing their hands with soap for roughly 20 seconds or using hand sanitiser.

Tradespeople and engineers can continue working if they are well and show no symptoms, provided they also exercise social distancing guidelines to protect families, and should not work in households under quarantine.

Police and other 'relevant authorities' will enforce the measures for a period of three weeks up to 23 March, subject to Government review, and will issue fines to people for failing to comply with safety regulations.

Under new regulations, the Government can impose such fines if people fail to comply under sections 15 (1-5) for failing to self-isolate, providing false information "intentionally or recklessly" or obstructing authorities. Despite this, the new enforcement procedures have come under intense scrutiny from human rights groups and organisations, it was revealed.