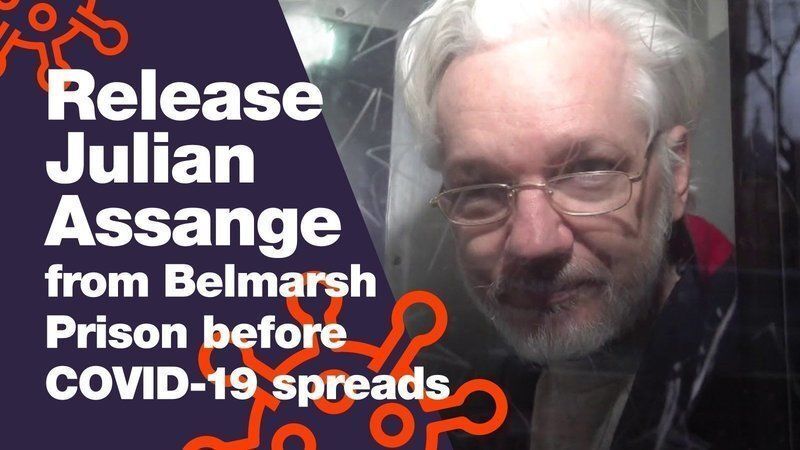 The president of the UK's Prison Governor Association recently told the BBC that overcrowding and unsanitary conditions in English prisons means that inmates will likely start to die as a result of the spread of COVID-19. Julian Assange remains incarcerated in Belmarsh maximum security prison as he challenges his extradition to the United States.

A new petition, drafted by WikiLeaks's official Don't Extradite Assange (DEA) campaign, is calling upon the UK's Home Secretary to release its incarcerated founder and publisher Julian Assange, "before the coronavirus [COVID-19] spreads through the prison population".

​"As a vulnerable prisoner whose health is already in jeopardy further isolation would be damaging in itself, let alone the threat that the virus breaks out inside the prison", the petition, which was published on 18 March 2020, says.

It argues that the "increased health risk" to the multi-award-winning journalist and editor means, "he should be released immediately".

The DEA petition argues that since there is, "a high possibility that the prisons will cancel all visits which means even harder access to his family and friends", releasing Assange and, "other vulnerable prisoners would reduce the risk of outbreak of the virus inside the prison".

"Julian Assange should be with his family during this time where he can prepare his defense against his extradition hearing. He has been charged by the Trump Administration under the Espionage Act for publishing truthful information and he could face up to 175 years in US prison", the petition statement concludes.

Doctors for Assange also published a letter on 18 March 2020 in which they called upon the Australian government to lobby for Assange's release from Belmarsh, also due to the increased threat of the spread of COVID-19.

​The journalist has been in a weakened state according to his lawyers and those who have visited him. The UN Special Rapporteur on Torture Nils Melzer, along with two other medical experts in examining torture victims, concluded that Assange showed clear signs of someone who had been psychologically tortured, after visiting him at Belmarsh prison.