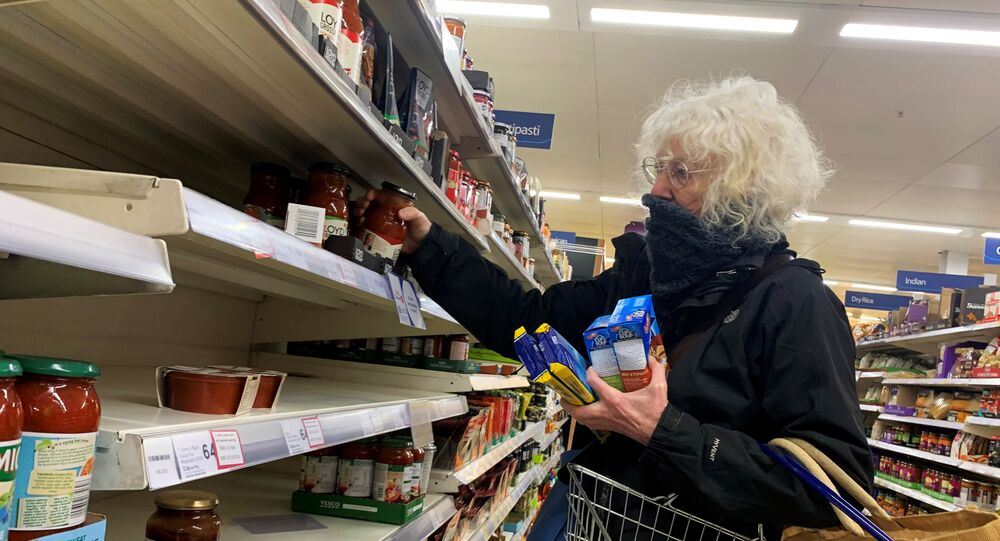 At the moment UK Public Health authorities have registered 1,140 cases of coronavirus infection in the country, with at least 200 new cases registered on 14 March alone.

The ongoing spread of the COVID-19 virus is causing panic inside the UK, reducing consumer buying across the board, especially in the tourism industry. The latter could potentially lead to a drop in the country's GDP and prevent the British economy's swift recovery from coronavirus shocks in 2020, The Telegraph reported citing economists, industry leaders, and statistic data.

Julian Jessop, an independent economist cited by the newspaper, forecasts losses for the economy in the coming weeks on par with levels of annual GDP drops in times of financial crisis due to the outbreak's impact on businesses. According to the economic expert, if around 20% of the population contracts the virus and the government continues to implement measures to counter the outbreak's effect on the economy, the UK will lose at least 6% of its GDP in just a quarter.

Major losses for the UK economy and, potentially, bankruptcies of even financially healthy companies, will come as British firms lose customers due to changes in their behaviour as people try to avoid contracting COVID-19.

Shops and restaurants are already feeling the pinch as Britons prefer to stay home instead of going out. According to statistical data, cited by The Telegraph, retailers lost around 6% in footfall on Thursday and 8% more on Friday.

Tourism is another sphere that has been significantly affected by the outbreak. Several countries, such as Spain and the US, have either already closed or are planning on closing their borders, to prevent the spread of the infection. Britain's hospitality sector is one of the spheres that could be affected by the epidemic, the newspaper said.

According to the head of the trade company UK Hospitality, Kate Nicholls, British hotels will "run out of cash in about eight to 10 weeks" since they've lost almost half of their clients due to the coronavirus.

Several business sectors are actively lobbying the government to introduce measures to help them cope with coronavirus-induced economic shocks. According to the media, restaurant chains are calling for almost quarter-long rent holidays. Banks, in turn, are calling for emergency loans for businesses with payment holidays, as well as to postpone planned regulatory changes, such as replacing the old system of interbank lending, Libor, with a completely new one.

Army to Step in if Crisis Reaches Its 'Peak'

Even if British businesses gets hit by the coronavirus outbreak, the UK Army will be ensuring that Brits retain their access to essentials such as food and petrol, according to a plan devised by Lieutenant-General Tyrone Urch. Under this plan, dubbed Operation Rescript, thousands of British troops will be tasked with filling shops with provisions and petrol stations with gas if the virus epidemic reaches its "peak".

The plan goes in line with Prime Minister Boris Johnson's promises on 3 March. At the time, he suggested that British troops might come to the rescue if the situation in the country starts to deteriorate.

"The army is of course always ready to backfill as and when, but that is under a reasonable worst-case scenario", the prime minister said.

Right now the UK's Public Health Service has registered 1,140 coronavirus cases in the country and 21 deaths from it, but the pace with which the disease is spreading has recently increased with at least 200 new cases reported in the UK by the World Health Organisation on 14 March.