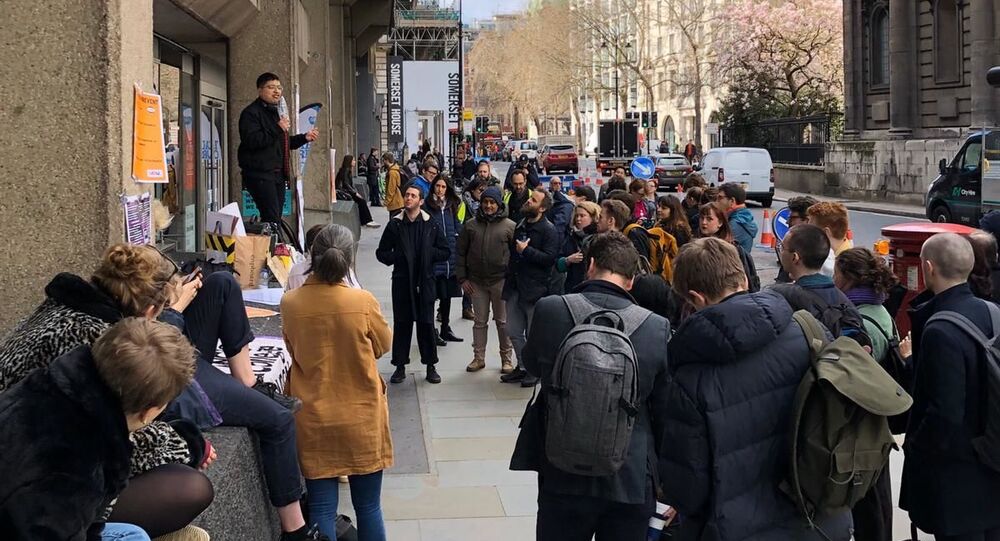 University College Union have criticised the British government's 'counter radicalisation' PREVENT strategy for seeking to turn teachers into intelligence officers. They say it stifles dissent and undermines freedom of speech. The UN expert on the right to peaceful assembly called the policies, "inconsistent with the principle of the rule of law".

The UK continues to see mass industrial action across its universities as 74 different University College Union (UCU) branches enter the fourth week of strikes over changes to their ​pensions​ and the ​"deterioration of working conditions​". 11 March 2020 saw specific focus given to the government's controversial 'counter radicalisation' PREVENT programme at picket lines and rallies across England, and at the University of Edinburgh, in Scotland.

Under the PREVENT programme, all staff members at publicly funded organisations, including nurseries, schools and universities, are legally obligated to, “have due regard for the need to prevent people beingdrawn into terrorism".

I am a teacher, not a cop or border guard. Bedford Way picket joins day of action against the racialised securitisation of universities #preventingprevent #studentsnotsuspects @UCL_UCU @abolish_prevent pic.twitter.com/W1ZwrEbJZv

​But critics, including five separate UN experts, point out that the strategy is lacking in scientific rigour, facilitates mass surveillance and undermines basic freedoms such as the right to dissent.

Most recently Ms Fionnuala D. Ní Aoláin, the UN's expert on protecting fundamental freedoms while countering terrorism, warned that, “large-scale violations of the rights of religious and ethnic minorities are being enabled by “deradicalization” policies and practice".

A report issued today suggested Prevent should be scrapped in its current form, because it targets ill-defined “extremism” as well as violence & terrorismhttps://t.co/kT5IPHfZRp

​​"‘While universities claim to be bastions of equality, diversity and inclusion the ongoing UCU strikes and today’s day of action against Prevent expose the continued racism and inequality built into universities", said Dr Sita Balani, lecturer in contemporary literature and culture at Kings College London.

@UnisNotBorders and @UM_UCU in solidarity with today's National Day of Action Against Prevent called by @abolish_prevent. All forms of racist surveillance in UK universities that target Muslim, Black, PoC leftists activists must end! #UCUstrike #UCUstrikesback pic.twitter.com/lRfmorhczl

​A statement from the striking teachers pointed out that there has been extensive opposition to PREVENT for many years in higher education.

"At its 2015 and 2019 Congresses, UCU passed policy which objected to the Prevent duty, on the grounds that it: seriously threatens academic freedom and freedom of speech; stifles campus activism; encourages educators to spy on students; is discriminatory towards Muslims, and legitimises Islamophobia and xenophobia; and encourages racist views to be publicised and normalised within society", the statement explained.

UK Prevent programme is counter-intuitive rather than counter-terrorist. Excellent @KCL_UCU teachout on the need for all educational institutions to desecuritise and #PreventPrevent - a programme that criminalises kids as young as 3...ffs #UCUstrike pic.twitter.com/qiPz7Scomd

Fope Olaleye, the National Union of Students (NUS) Black Students' Officer, said that her union's policy is to demand the abolishon of PREVENT. "PREVENT does not start or end at the campus", she said, "and students are by no means the only victims". Though she noted that at universities the relationship of student and teacher has transformed into one of "suspects and informants". Olaleye argued that Black and Muslim communities and individuals have "suffered the sharpest manifestations of the [government's] agenda".

​In addition to opposing PREVENT university workers also complain of unsustainable workloads, unnecessary exploitation of precarious staff, and "scandalous" pay gaps between minority and female staff as well as an unfair pension scheme.

"We are fighting for the end of causalisation and the unsafe workloads" postdoctoral teaching fellow Ignasi Bernatt explained. "For me that is the key, it is not about money. It is about health and safety and inequalities", he added. Bernatt, who is on a fixed term contract at the University of Winchester, explained that he used to be a lecturer at the University of Surrey but like many he has suffered under less secure contracts which offer less pay.

© Photo : Ignasi Bernat
Picket Line Outside of University of Winchester

"The model of neoliberal universities are not only leaving working class students out of the pathway. It is also undermining the rights and health of lecturers too. Everyone is getting affected. And the work conditions definitely are affecting the way we deliver education. Precariousness and overwork mean also worse education", he said.

In total staff are striking for 14 working days over a four week time frame, starting from 20 February 2020.