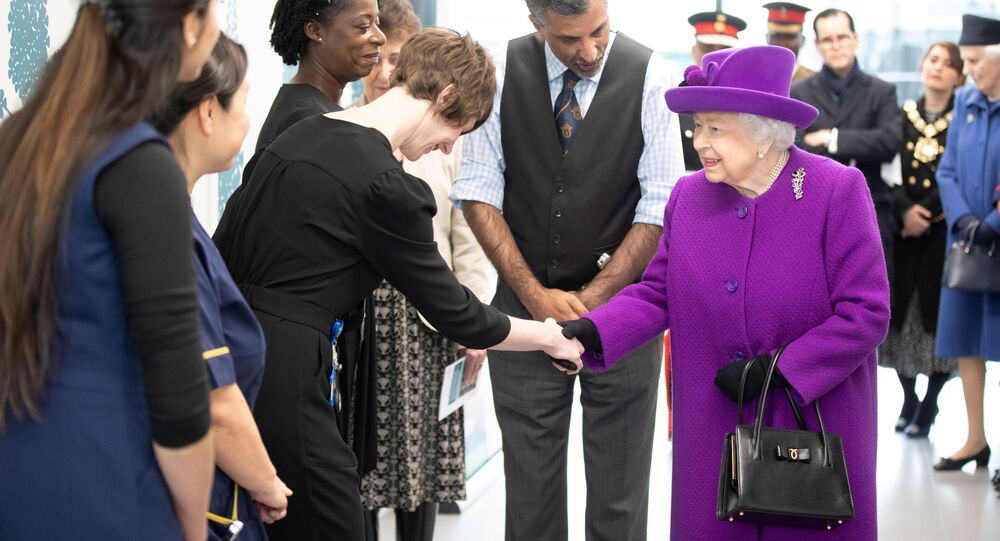 The Wuhan coronavirus (COVID-2019), despite extraordinary measures taken across the globe, continues to claim new victims, updating the number of infected and the death toll on an hourly basis.

The United Kingdom's Queen Elizabeth II, 93, who, according to the latest research data, falls into the risk group of people who could be affected by the coronavirus - has reportedly suspended handshaking, The Daily Mail said.

On Monday, the Queen and other senior royals reportedly did not shake hands with senior officials, including UK Prime Minister Boris Johnson, during the annual Commonwealth Day service at Westminster Abbey, following a new policy to discourage the greeting, The Daily Mail reported.

According to a source, cited by the media outlet, it was "currently Her Majesty's personal preference" not to shake hands during the Coronavirus outbreak.

Earlier this week, Queen Elizabeth II was pictured meeting the Sri Lankan High Commissioner, Saroka Sirisena, and her husband, Dr. Sudath Talpahewa, at Buckingham Palace. The Queen had no gloves but, according to The Daily Mail, there was no handshaking ceremony during the meeting.

England's Chief Medical Officer, Professor Chris Whitty, has said the death rate for individuals infected with COVID-2019 has "significantly ramped up" among those over the age of 80, according to The Daily Mail.

PM Johnson said that the move not to shake hands sent a "subliminal cue" about the importance of hygiene.

© REUTERS / CARLOS BARRIA
Pence Says Trump to Continue Shaking Hands Despite Coronavirus
"We were all given an instruction not to shake hands and there's a good reason for not shaking hands, which is that the behavioural psychologists say that if you don't shake somebody's hand then that sends an important message to them about the importance of washing your hands. So there's a subliminal cue there to everybody to wash your hands, which is, I think I'm right in saying … far more important", Johnson said, cited by The Daily Mail.

The number of confirmed COVID-19 cases in the United Kingdom rose by 54 to 373 on Tuesday. Boris Johnson held an urgent meeting of the government's Cobra emergency committee in response to the ongoing outbreak.

The number of confirmed coronavirus cases has topped 119,000 across the globe, with over 4,200 dead, according to the most recent data.