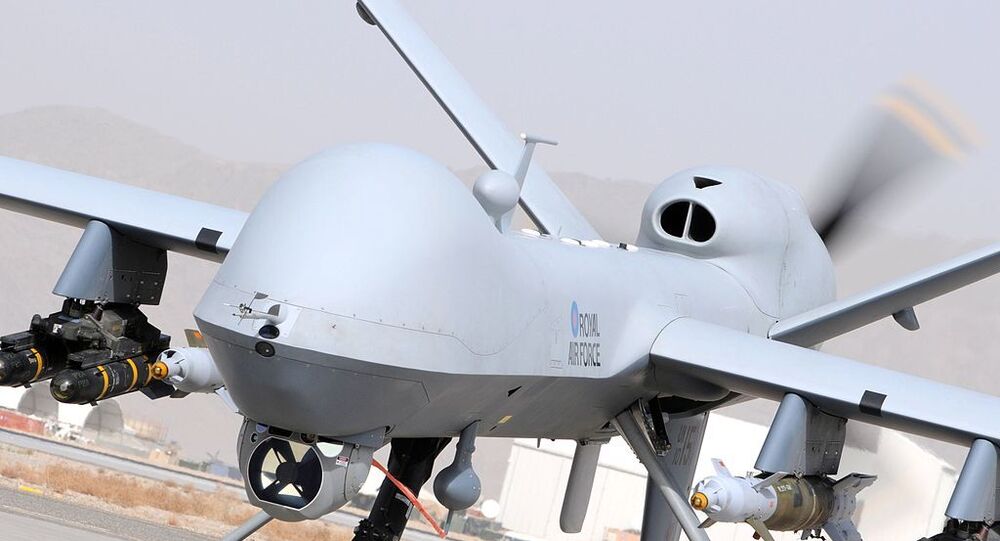 Research by Drone Watch UK shows that on average large Predator-style military drones crash "twice a month". The NGO warns that there are significant safety and civil liberties risks which stem from allowing unmanned military aircraft to fly ‘unsegregated’ over UK skies.

The British Ministry of Defence (MoD) pressured the Civil Aviation Authority (CAA) to violate its own safety protocols, in order to prevent protesters having too much of a heads up regarding a transatlantic flight of a military drone over UK skies, The Guardian revealed on 9 March 2020. According to official documents obtained by the paper the MoD and CAA clashed over whether the standard 60 days advance notice should be given so that other aircraft can make the necessary adjustments and avoid the risk of a collision.

The defence ministry, which is purchasing 16 replacement 'Protector' drones from the US, only wanted 6 days notice to be given to the public, purely to avoid "anti-drone’ protests hampering the arrival [of the drone] at Fairford [air base at Glouchester]", according to one email from a CAA employee cited by The Guardian.

The Protector drones are a variant of the Predator drones (the UK version of which were previously called 'Reaper' drones) and the airspace over which they fly is normally segregated, with sufficient advance notice given to the public, to reduce the risk of accidents. Emails show a CAA employee expressing "significant concerns" that the MoD's proposed 6 days notice was far too little to avoid potential disaster.

"The main concern is that the UK MoD exerted pressure on an independent regulator to erode safety norms in order to prevent protests against the use of armed drones", Chris Cole, from the NGO Drone Watch UK, explained.

"What is even more worrying is that the CAA are due to make extremely important decisions over the next couple of years about whether these armed drones can fly in UK skies", he added.

Cole argued that if the MoD was prepared to pressurise the CAA once they are "likely to do so in the future". He has what he described as, "two different but related concerns", in respect of allowing military drones to fly in the UK.

"These Type of Drones Crash A Lot"

But Cole said that just as important as the mechanical safety issues are the civil liberty issues. "Without proper oversight and accountability it will not be  possible to know how these drones are being used and what intelligence they are capturing on flights within the UK", he warned.

"The UK  is already one of the most surveilled countries in the world - introducing military drones takes that even further."

Drone Wars UK published a 4-page briefing  about the Protector drones on the same day of The Guardian's revelation.

According to the briefing a key concern for the CAA is that the "bedrock" of air safety regulation, the physical presence of a trained human pilot who can visually see and avoid other aircraft, is missing from drones. Regulators apparently remain unconvinced that the "detect and avoid" technology embedded into the Protector models offer the same levels of safety that having an actual pilot offers.

Meanwhile, the 16 Protector drones purchased from the US have already increased in cost by £325 million above their approved budget, raising their price tag to £1.14 billion. General Atomics, the manufacturer of the Protectors, "sees the UK as a key gateway to opening up airspace in Europe and around the globe for its drones", according to[pdf, p4] Drone Watch UK. "The decision to allow Protector to fly in UK airspace is potentially worth billions of dollars to them", they added.