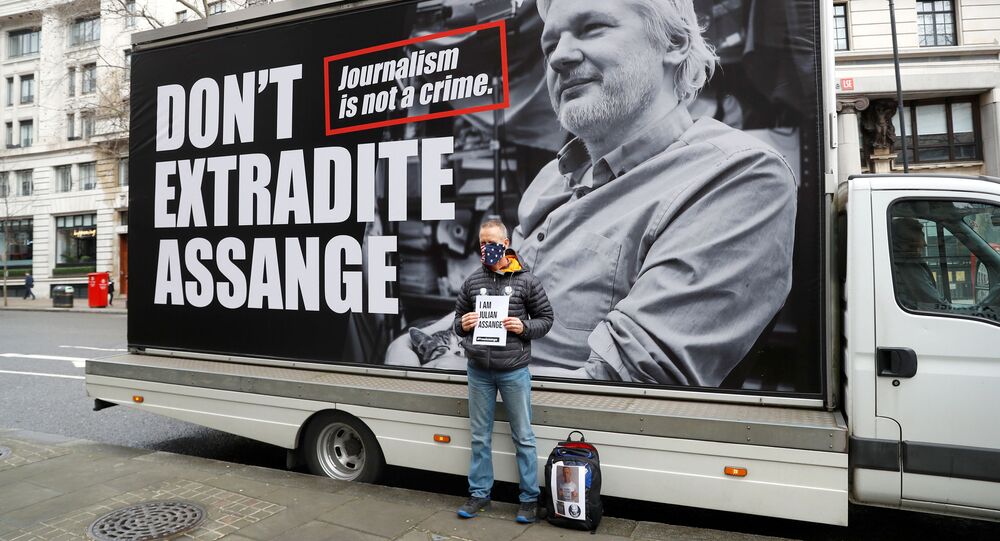 The main court hearing on Julian Assange’s extradition to the US kicks off in London on Monday as the WikiLeaks founder faces a spate of charges for his role in leaking classified documents about US war crimes in Iraq and Afghanistan.

Former Greek Finance Minister Yanis Varoufakis visited Julian Assange at Belmarsh prison in London on Sunday ahead of the Wikileaks founder's US extradition hearing which opens at Woolwich Crown Court in the UK capital on Monday.

Speaking to reporters outside Belmarsh after the visit, Varoufakis likened the Assange case to “an assault on journalism”.

Yanis Varoufakis: The only 'crime' Julian Assange committed was reporting the truth to the world - that's called journalism.

“The charge against Julian, hiding behind the nonsense of espionage, is a charge of journalism”, the ex-Greek Finance Minister argued.

He also joined Assange's father John Shipton during a support rally for the whistleblower earlier on Sunday, during which Shipton warned that extraditing his son to the US would be a “death sentence”.

The statement came in the run-up to the main court hearing on Assange’s extradition to the US, which opened in London earlier on Monday.

If extradited, the whistleblower faces up to 175 years behind bars over WikiLeaks’ publication of a trove of classified files exposing the atrocities committed by US troops during their military operations in Afghanistan and Iraq.

Assange, who was initially accused of sexual harassment and rape in Sweden in 2010, remained in the Ecuadorian embassy in London from 2012 to 2019 after he was granted asylum there. Sweden finally dropped accusations against the whistleblower late last year, claiming that after nearly a decade, witnesses’ memories had faded.

In April 2019, Assange was arrested by British police for breaching his bail conditions, and a month later, the US Department of Justice indicted Assange on 17 additional charges under the Espionage Age and demanded his extradition.