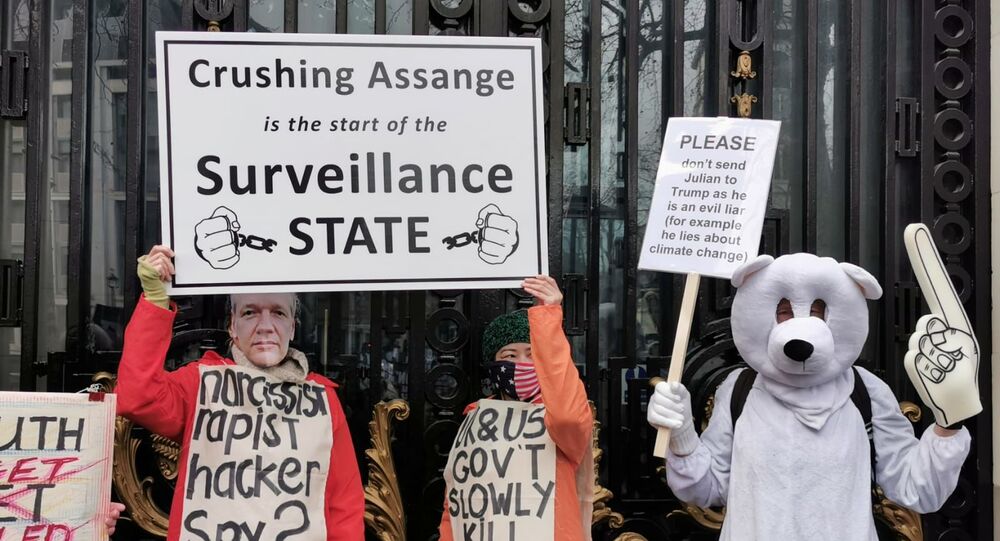 LONDON (Sputnik) - The main court hearings in the Assange extradition case will begin in London on Monday and will continue the whole next week. Assange's lawyers intend to present a number of facts related to his persecution by the US authorities over the past decade.

A large rally in support of WikiLeaks founder Julian Assange began in London ahead of court hearings on his extradition to the United States, a Sputnik correspondent reported from the scene.

More than 200 Assange supporters gathered at Australia House in central London at noon (11.00 GMT) on Saturday, demanding Assange's release and protesting against his extradition to the United States.

Later, a column of activists moved toward Parliament Square, where Assange’s lawyers, musicians and public figures were set to give speeches.

The WikiLeaks founder was charged by a US court on 18 felony charges, mostly regarding the violations of the Espionage Act after he leaked classified cables that exposed US transgressions during the Iraq and Afghan wars. Assange faces five to 10 years in prison for each if convicted.

Assange spent seven years in the Ecuadorean Embassy in London after skipping bail and asking for political asylum in 2012 to evade possible extradition to the United States.

The whistleblower was forced out of the embassy last year and is being held at a high-security prison in London pending an extradition trial, which is scheduled to begin on Monday. A UN rapporteur on torture has noted signs that Assange had been subject to prolonged psychological torture.