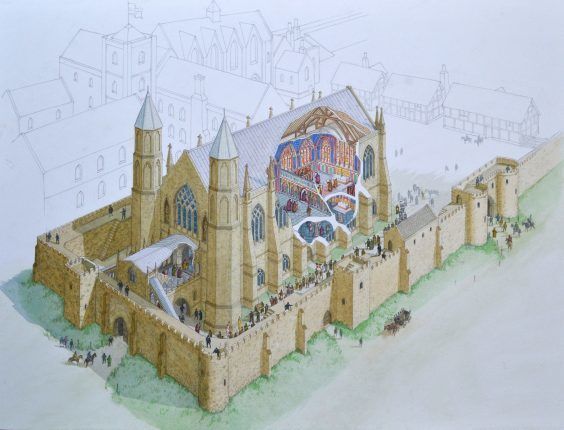 Antony Bek, a powerful warrior bishop who served as an advisor to King Edward I, ordered the construction of a large, two-leveled chapel in the 14th century, but the religious structure was destroyed in the 17th century and feared lost forever, until now.

Archeologists in Durham County, northern England have discovered the remains of a monumental medieval chapel destroyed during the English Civil War, discovering that the religious site was hidden on the grounds of Auckland Castle all along.

The discovery was made by scholars from Durham University, who worked alongside curators from the Auckland Project, a local initiative dedicated to the region’s history, after carrying out several digs at the castle’s grounds in search of the lost religious site.

The significance of the find is massive, archeologists say, since the chapel is thought to have been larger than the Royal Chapel at Westminster, nearly as large as Windsor’s St. George Chapel, and comparable in grandeur to continental chapels such as Paris’s Sainte-Chapelle.

The 40 meter long, 12 meter wide structure had walls 1.5 meters thick. Illustrations of the chapel provided by the Auckland Project shows that in its glory days, the towering religious building was protected off by massive stone walls, which sheltered the chapel itself, as well as over a dozen other buildings.

So far, diggers have found masonry from the chapel’s walls, stone columns, pieces of the floor and even bits from the site’s stain glass windows. In addition, they’ve found some of the artifacts which would have been used during religious services in Medieval England, including pieces of the sacramental bowl which once held communion bread.

The chapel was razed to the ground by order of Sir Arthur Hesilrige, a staunch republican and opponent of the Church of England, in 1646, with a mansion put in its place. And, although the castle was later restored, the chapel was never found or restored to its original state.

John Castling, an archeology and social history curator at the Auckland Project, told reporters that the discovery of the chapel was immensely significant. “For centuries it has been one of the great lost buildings of medieval England,” he explained. “Our excavation of this huge chapel has shed additional light on the immense power and wealth of the Prince-Bishops of Durham – and has helped bolster Auckland Castle’s reputation as a fortress of great importance in the history of England.”

Antony Bek, a bishop warrior who gradually became one of the most influential men in Europe, advising King Edward I on a crusade in 1270 AD and during the conquest of Wales between 1277 and 1283, had the power to mint his own coinage, and even rule on Edward’s behalf. Among other things, Bek was known to have fought Scottish knight William Wallace, one of the leaders of the First War for Scottish Independence. In 1297, after Wallace crushed the English at Stirling Bridge, Bek raised an army of 1,000 soldiers and 140 knights to destroy the insurrection, commanding the right flank of English forces at the Battle of Falkirk under the overall command of Edward I. Bek ordered the chapel’s construction in 1284, with construction completed in 1310, one year before his death.