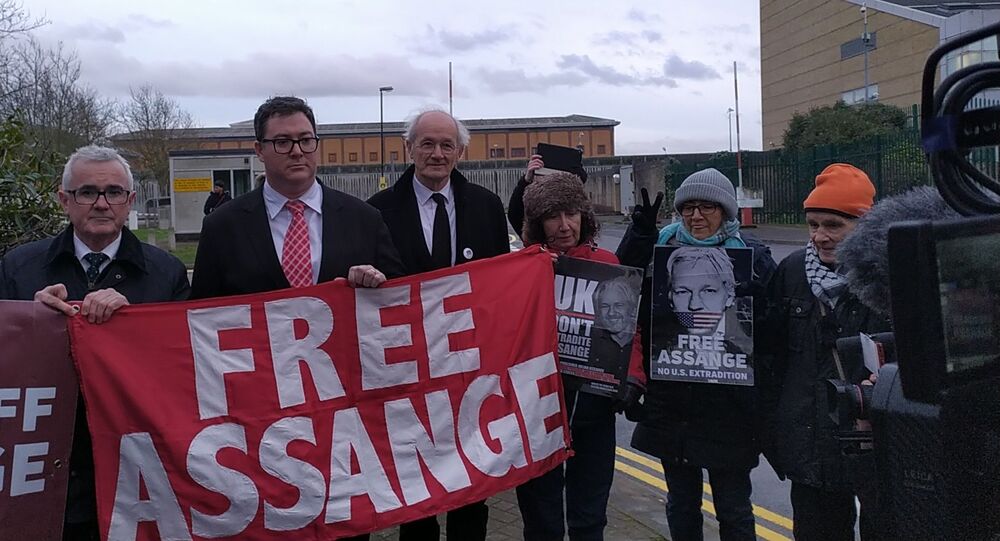 Two Australian MPs who have visited Julian Assange in Belmarsh maximum security prison say that there is no way the WikiLeaks publisher can receive a fair trial in the US, and that it is "madness" that he is being detained in the first place for engaging in what they characterise as legitimate journalistic practices.

Australian MPs Andrew Wilkie and George Christensen visited Julian Assange in the UK, in Belmarsh prison, on 18 February 2020, and have been left in “absolutely no doubt” that the WikiLeaks founder is a “political prisoner”. The two MPs co-chair the Bring Julian Assange Home parliamentary group and travelled to the UK to check on Assange's well-being as well as lobby for his release.

“The US is determined to extradite Assange to get even” Mr Wilkie argued at the gates of Belmarsh, adding that "the solution" to bringing Assange's incarceration to an end "must be political”. He called the idea that the UK was even considering having a court case “madness” rather than simply telling the administration of Donald Trump to “back off”.

1/4 @WilkieMP & Christensen MP visited #JulianAssange @ Belmarsh for 90min
Wilkie says:
1) #Assange is confined to his cell 20hrs+/day
2) "Absolutely no doubt" he's a "political prisoner" & US is determined to extradite him "to get even" for exposing "hard evidence of war crimes" pic.twitter.com/CL0VpDRJ1h

Assange faces 175 years in prison for his role in publishing classified US documents revealing “hard evidence of war crimes”, as Mr Wilkie put it, committed by US-led forces in Iraq, Afghanistan and US-occupied Guantanamo Bay, Cuba.

Mr Wilkie was an officer in the Australian infantry for over two decades before he became an intelligence analyst working for the Australian prime minister and cabinet office. He resigned just before the illegal US/UK-led 2003 invasion of Iraq and blew the whistle over "fraudulent" claims being made by the Australian government in defence of that war.

“It is completely and utterly unacceptable” for Assange to be facing espionage charges in the US for his role in revealing war crimes committed by the US, Mr Wilkie contended.

“Julian reminded me that we met at a book event in Melbourne not long after I resigned and before he set up WikiLeaks”, Mr Wilke said. He confirmed that his experience as a “whistleblower” in 2003 informed his “special interest” for Assange and his support for WikiLeaks. “We’re peas in a pod in that we both believe misconduct should be publicised, that the public has a right to know when governments do wrong in our name.”

I asked @WilkieMP how his experience as a whistleblower, when he was an intelligence analyst in 2003, inform his position in #Assange's case. Wilkie resigned over Australia's role in the 2003 US/UK illegal-invasion of Iraq. pic.twitter.com/p7Z0XT7J03

George Christensen MP: "He's not a Brit, he's not an American, and he should be returned home"

“I do not know that there is a way that Julian fairly and justly could ever be imprisoned, could ever be extradited” Mr Christensen, of the right-wing National Party, said. The self-proclaimed “big fan” of US president Donald Trump and UK Prime Minister Boris Johnson re-iterated comments he made during a press conference earlier in the day that despite his affection for the two world-leaders he is a “bigger fan” of democracy and free speech.

3/4 George Christensen MP echoed Wilkie's comments, adding:
1) He doesn't know how Assange could ever be "fairly imprisoned or extradited" to US
2 a) Assange "took heart" from Johnson's recent recognition [after being pushed by Corbyn] that US-UK extradition treaty is unbalanced pic.twitter.com/Ucf6k1tcBm

4/4
b) Hopeful Johnson will follow through on his reply during PMQ's https://t.co/tK6Hhy3axm that UK is committed to protecting journalists
3) "Diplomatic back channels" are needed to bring this to an end
4) "He's not a Brit, he's not an American and he should be returned home".

​“He’s one of ours.. He's not a Brit, he's not an American, and he should be returned home", Mr Christensen concluded.

Assange Remains Under "A Lot of Pressure"

A victory for Assange was declared on 24 January when prison authorities moved him from solitary confinement in the medical wing of the maximum security prison to a populated area with 40 – 50 inmates. However, the two MPs said that Assange told them he was nonetheless being confined to his cell for more than 20 hours a day, which Mr Wilkie considered to be 'effectively solitary confinement'.

The MPs made clear that while they are not medical experts it as nonetheless evident that the award-winning journalist and editor was under “a lot of pressure”. They added that they had no reason to doubt the conclusions of UN torture expert Professor Nils Melzer.

​Melzer, and two other renowned medical experts in examining torture victims, concluded that Assange exhibited symptoms of prolonged exposure to “psychological torture”. He has also argued that the behaviour of the UK, Swedish and US governments in this case is undermining democracy and the Rule of Law.

A Growing Movement in Assange's Favour

Mr Wilkie concluded his thoughts by saying that momentum was beginning to build in Australia as exemplified by the growing membership of the Bring Julian Assange parliamentary group and the recent intervention by the former PM Kevin Rudd,

I asked @WilkieMP on Kevin Rudd's (Australia's ex-PM) intervention (see here:https://t.co/NimNUG1SRZ) against #Assange's extradition. Wilkie called it "significant" but added that it was "regrettable" that every Aussie govt since 2010 has either been "complicit or silent". pic.twitter.com/XgYQGRPLjb

​He expects that more parliamentarians will join the call for their government to intervene on behalf of the imprisoned publisher after Mr Wilkie and Mr Christensen report back their findings.

A Long Road Ahead

Assange’s lawyers have long complained that they are being denied proper access to their client by prison authorities, As a result, they say Assange is unable to properly prepare for his defence in what is a very complicated case. Judge Venessa Baraitser has repeatedly refused to intervene on Assange’s behalf despite being provided the precedent of another judge doing so with the same prison authorities at Belmarsh.

Barrister Jen Robinson told the press on the morning of 18 February that until recently they couldn’t even hand papers to their client, and that his laptop – which prison authorities reportedly provided to him after months of delays – is unsuitable for his needs.

The substantive extradition hearings begin on 24 February and will last for one week, during which time both the state and the defence will present their case. The hearings will then pause until 20 April when they are expected to restart for a further three weeks. Assange’s lawyers estimate that the whole process may end up taking a number of years, if appeals up to the Supreme Court are factored in.